Sorry for the delay, it's been a crazy few days. Since I have 4 days worth of adventures to cover in the next two posts, I'll try to be as detailed yet succinct as possible. Here goes! 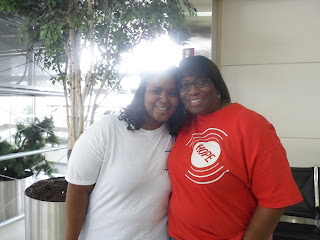 After taking one last picture with Ma and saying goodbye, I boarded my first international flight ever! Takeoff was delayed an hour, but other than that all went smoothly. I passed the 13 hours away by watching four movies: The Thieves (Korean),  今日、恋をはじめます/Love for Beginners (Japanese), 映画 ホタルノヒカリ/Hotaru The Movie (Japanese), and Never Ending Story (Korean). I'd recommend all of them except for Hotaru. During the flight I took two naps, but neither were more than an hour each. They were enough to prevent me from feeling exhausted when we landed, though. Oh, and the food was actually really good!

Monday 6/3: Nagoya to Hikone
As I wrote before, when we arrived in Nagoya just before 7pm it was already dark so I couldn't see much on the hour and a half bus ride to Hikone. At first I was really glad as I looked out at the buildings, neon signs, and landscapes we passed. Wow, I made it. I'm finally here. But then I became a little sad. I'm in a new country, I'm all alone, and it's dark. Maybe I made a mistake? However, before giving myself enough time to think myself into a corner and cry, I took a nap. Since starting college, I've realized that one of the best things to do when I'm overwhelmed or can't think straight is to drop everything and go to sleep, even if only for a few minutes. After arriving at JCMU, I unpacked and went to bed around midnight.

Tuesday 6/4: First Full Day at JCMU
I woke up at around 4:40am and tried to go back to sleep, but it just wasn't happening. So I stayed in bed awake until 5:30, then read the Bible (Psalm 69) and did some yoga (Melissa West, Namaste Yoga 179 "You're Already Complete". I'm glad that I decided to do these things before I did anything else, because they really helped me approach my first full day at JCMU with a calm spirit and open mind.

Off to the welcome breakfast! After an orientation and some other formalities it was time for a bike 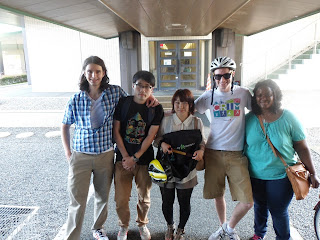 tour! I was in a group with three male classmates of mine and a Shiga Daigaku student named Chie was our volunteer guide. She was really small, stylish and kind, and to my surprise I could communicate with her pretty well! I found out that we're both 20 years old and juniors in college. She took us all around the city of Hikone and though I couldn't tell you how to get to all the places we stopped at, it was nice to get out and see my surroundings. I also didn't take any pictures during the tour because I was enjoying the experience too much, but I do have pictures of what I bought.

After taking us past Lake Biwa and the Beisia supermarket, Chie led us to Shiga Daigaku and we ate at a cafeteria there. I got 冷やしうどん (hiyashi udon), a tofu side dish with spicy vegetable curry, and some cold tea (although, I think the tea was free). I paid ¥315 ($3.14) altogether, and all of it was delicious. 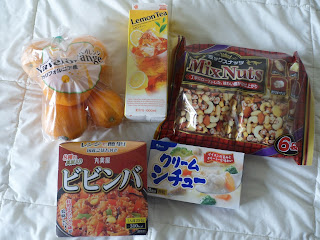 Afterward we did some more riding around and went back to Beisia, where we were supposed to buy groceries for ourselves. I didn't know that this was part of the schedule and I didn't know what to get, so I only bought a few things: a pack of 6 navel oranges from California, Lipton lemon tea, mixed nuts, microwave "bibimbap", and cream stew. It all came out to be ¥1,020 ($10.17). The oranges were ¥398 alone, which is a lot more expensive than at home, but it wasn't so bad. The tea isn't as sweet as its American counterpart and has a slight aftertaste akin to a lemon-scented Pine Sol, but overall it's pretty good. There wasn't anything different about the nuts. The imitation "bibimbap" was decent. Unfortunatley, I realized that what I thought was an instant cream stew is actually just a big ol' package of flavoring. So if I ever feel like bothering to actually make stew myself, I guess I'll use this so that buying it won't have been a waste.

We came back from the bike tour just in time for me to rush to make my home stay interview, which went pretty well. I went back to my room and passed out from about 5:30pm-9pm, got up to study a bit for my placement test the next day, and then went to bed at 12:30am.

Overall my first full day was tiring but eventful. Check out part 2 of this recap!