Kumagawa-san said she was going to have us back at her café, and she meant it. Yesterday about 7 of us returned to Kumakuma for a barbecue in celebration of 七夕 (tanabata)!

Tanabata is a festival that occurs every year in Japan, beginning on July 7th. It celebrates the meeting of two deities in Japanese folklore. These deities are lovers who are separated from each other and can only meet once a year. Because these deities are represented by stars, tanabata is often called "the star festival." Also, due to this legend, tanabata can be seen as a romantic holiday. But we just had a nice gathering among friends! In addition to us JCMU students, Kumakuma staff and a few local college students who are close with Kumagawa-san came to get in on the fun.﻿﻿﻿﻿
﻿
Kumakuma is usually closed on Sundays, but Kumagawa-san had prepared the place just for this occasion. The barbecue was held in the parking lot on the side of the building. Like most of the gatherings I've been to here, there was an overwhelming abundance of food. I didn't eat much but I tried a bit of everything. The food was great and everyone was in good spirits. I just couldn't stop sweating, though! The 90°F heat and the smoking hot food were killing me! But hey, that's summer isn't it?

We moved back inside the café after eating and talking for a while. Each of us young folks wrote a special wish or aspiration on a long, vertical strip of paper and attached it to a branch. Making a "wish tree" such as this is a tanabata
tradition. What was my wish, you ask? You'll have to check the other photos to find out. 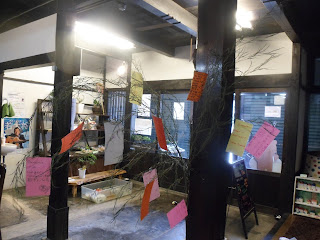 ﻿﻿
After that we passed the time chatting and folding origami. Well, I should say that everyone else folded origami. I can barely fold a crane, much less copy the penguins, sea otters, and horses that were being made. Instead, I just watched, rearranged the finished products, and took pictures of them. 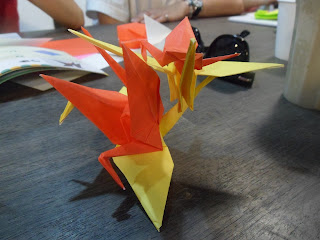 Yesterday was not only the first day (I recall) that that real summer heat hit us, but it was also my first time celebrating a Japanese holiday. I'm glad that I had the opportunity to do so with such lively and generous  people. Most of the college students who came had also been at Kumakuma when we went there the first time, so I really appreciated being able to talk to them again and get to know them better. Especially a certain someone....