Kaiyukan and Kindness in Osaka

Yesterday after taking our respective final exams (yes, we had exams on a Saturday) five of us girls went to Osaka one last time to go to Kaiyukan! 海遊館 (Kaiyuukan) is one of the largest aquariums in the world, and it was the only place I'd wanted to go to that I didn't get to visit the last time I was in Osaka. 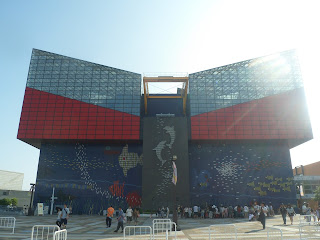 Honestly, I don't have much to say about Kaiyukan. The pictures, though not the clearest, will speak for themselves. I will say that I had a great time! I've loved animals ever since I was little, and watching them always puts me in a great mood. There's plenty to marvel at in Kaiyukan, so there's really no reason for anyone not to enjoy themselves here. And the ¥2300  ($23) ticket price certainly won't burn a hole in your pocket. If you're ever in Osaka, Kaiyukan is worth a visit! 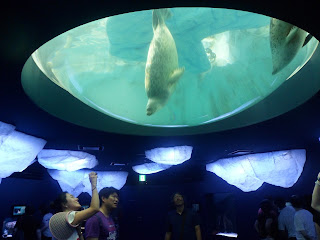 After we'd gone through the whole aquarium we walked behind the building to look out over Osaka Bay for a while before leaving. We'd planned on eating okonomiyaki and takoyaki since we were in Osaka, but by the time we left Kaiyukan we were so tired and hungry that it didn't matter to us what we ate. So after getting to Osaka Station we ended up eating at some Italian restaurant in  Umeda Station (the next building over). Then we returned to Osaka Station to board a train for Hikone.

Sorry if this post is a little anticlimactic. However, before I end this I'd like to share a couple encounters that I had with two Japanese women while I was in Osaka.

The first was on the train to Osakako (the station down the street from Kaiyukan). Most of the girls in my group were seated but I stood in the aisle. All of a sudden I felt someone tap me. I thought it might've been a little kid, but I turned around to see a middle-aged Japanese woman looking up at me from her seat. 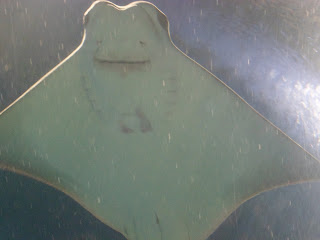 I know this sounds crazy, but I've been riding trains and subways all this time and not one Japanese person has ever spoken to me in transit. So I didn't know what to make of what happened, other than that I was lucky enough to board the same train as a nice lady who just wanted to make sure I wouldn't get lost.

The second encounter occurred at Umeda Station. While heading back to Osaka Station I saw a Books Kinokuniya store out of the corner of my eye. I'd been looking for the same book for the past 3 days (Kyoufu Collection by Atouda Takashi), and I figured I'd give it another shot. It was after 9pm, but the enormous bookstore was still open and crowded. I found a computer kiosk to look up the book and though it took me a minute or two to figure out how to use the search engine, I got the hang of it. While I was at it some 30-something-year-old woman walked up and offered to help me. I  thanked her and said I was fine, and she just nodded, smiled warmly and walked away. I know this doesn't sound all that spectacular. But this lady didn't work at the store, she was just another customer who could've passed me by without a thought like most Japanese people do. But she didn't, and that really surprised me in a good way. Oh, and unfortunately I never ended up finding that book. 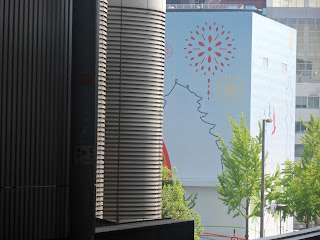 My friend Fumiko told me that Kansai people are nicer than Kanto people, and that people in Osaka are the kindest of all. Maybe there was truth to what she said.