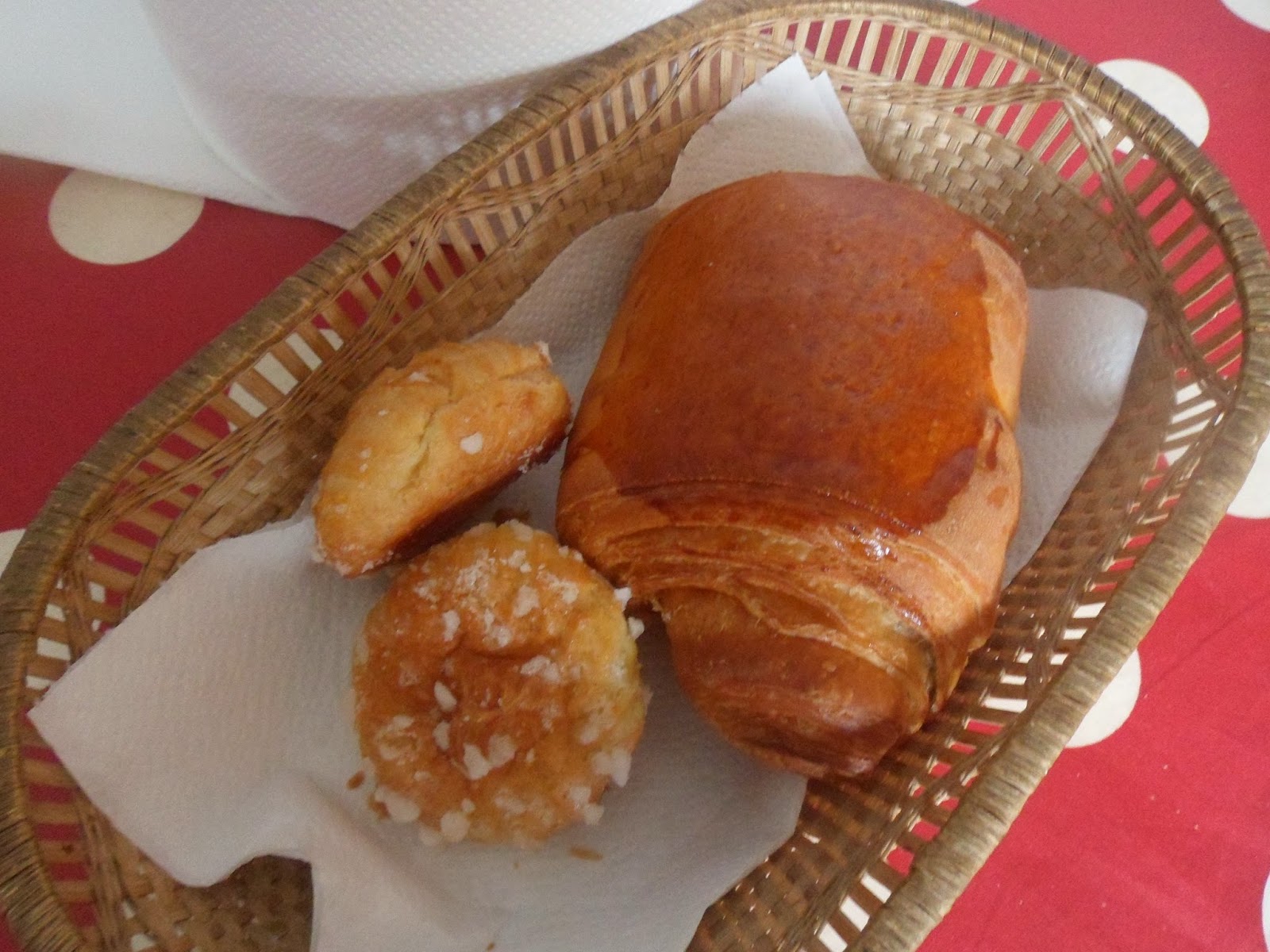 So in the States today is Memorial Day and all weekend people have been shopping and grilling and whatnot. But in France yesterday was actually Mother's Day. So my Sunday started with pain au chocolat and chouquettes that R-M's son and daughter-in-law had brought over. 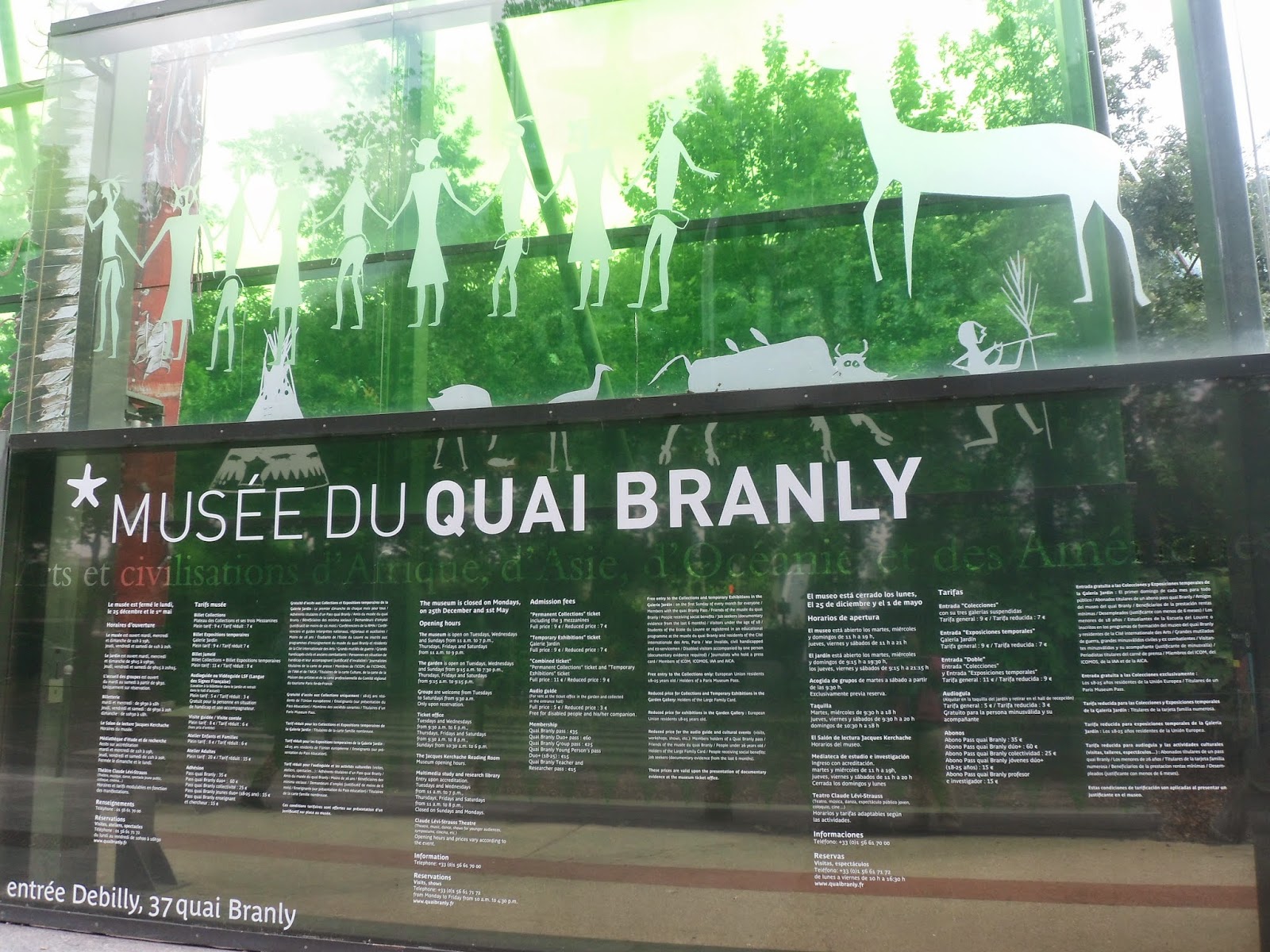 After breakfast I went to ACP, and then I met H at le Musée du quai Branly, which is just down the street. The museum's slogan is "là où dialoguent les cultures" ("where cultures speak to each other/are in dialogue"), and its areas of focus are Asia, Africa, Oceania, and the Americas. It exposes visitors to aspects of the cultures of various indigenous populations in these areas, while seeking to avoid exoticism and orientalism. 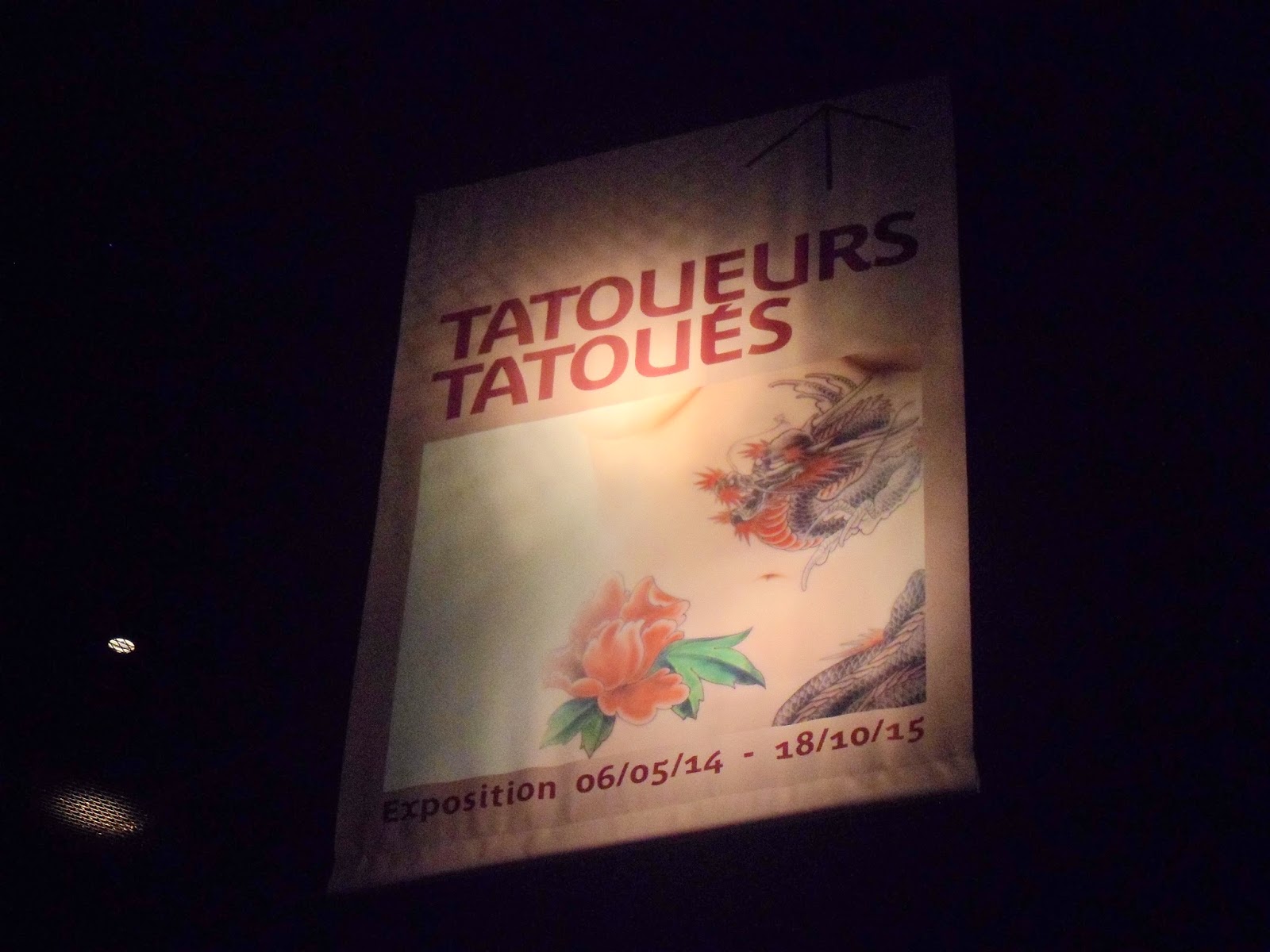 Our visit was relatively short, but rewarding. For starters, we got in for free because we're younger than 26 years old. I love not spending money! Additionally, we went there primarily to see "Tatoueurs, tatoués" (one of two major exhibits going on there right now), which showcases the history and practice of tattooing all over the world. Why were we interested in this one, you ask? Because we're young, tattoos are popular, and the subject of the exhibit is a hot topic, you know. Same reasons why all those other young people were there, I suppose. (I also might get a tattoo or two within the next ten years, and figured it would be good to learn about what I'm getting into.) After getting into the museum we had to wait in line for over an hour to get into this exhibit. We worried that we wouldn't make it in time for closing, but thanks be to God we got in and had two hours to see it all. 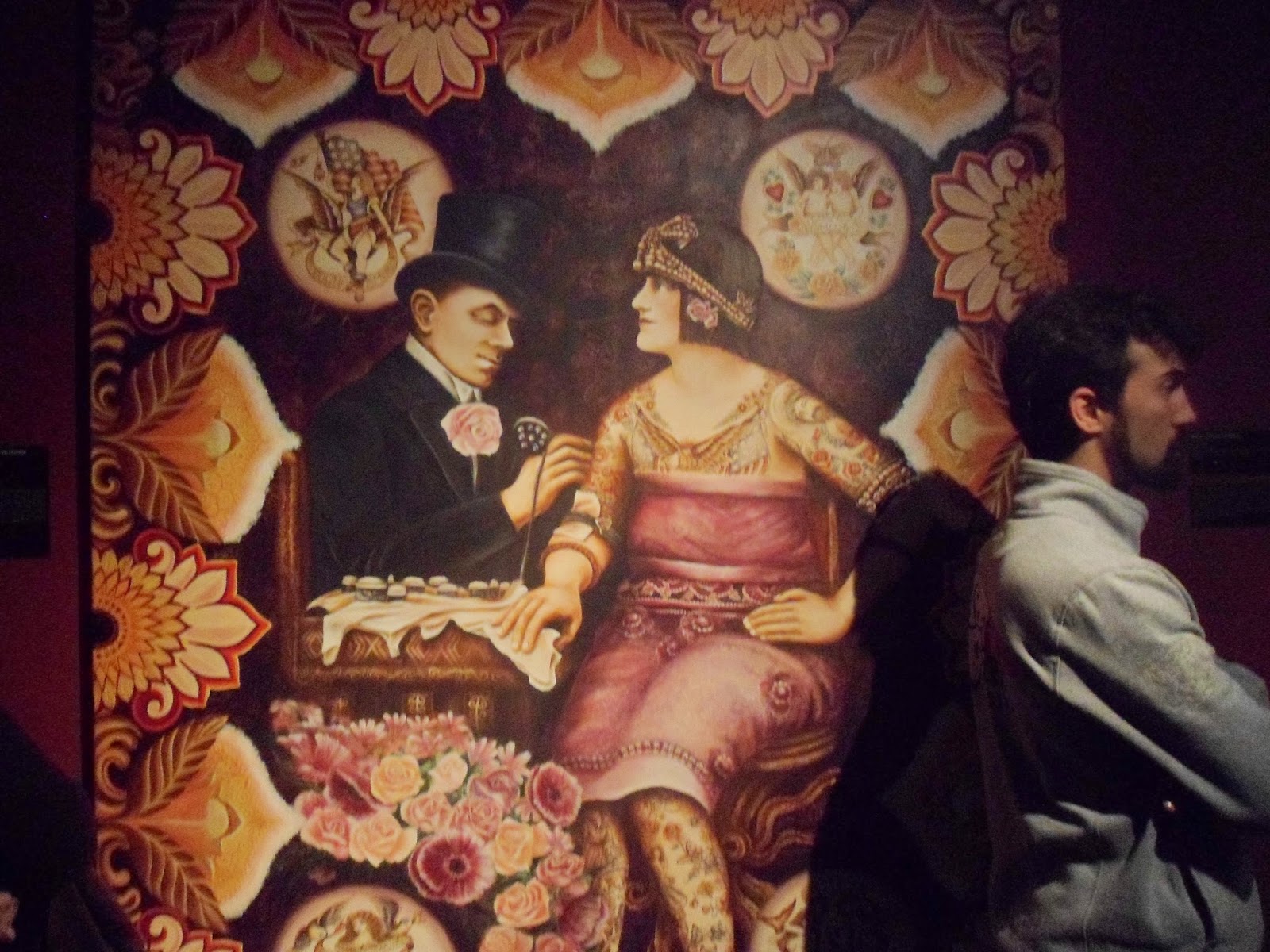 "Tatoueurs, tatoués" is organized chronologically, with subsections according to theme (militarymen, prisons/prison camps, side shows) geographical location, cultural group, or tattooing style (Japan, Europe, North America, Polynesia, Chicanos/Latinos, etc.). On display are paintings, drawings, photos, videos, and artifacts that have to do with tattoos. What I appreciated most about this exhibit is that it makes clear that tattooing isn't just some enduring heathen activity that won't go away, but is a cultural practice (forced or voluntary) that predates history itself. Furthermore, tattoos have functioned in various ways: as punishment, as a mark of social status, as body art, as a means of telling ones story or paying homage to a person/event, as self-expression, as resistance. And on top of that, there are sooo many different styles and methods of applying tattoos! I had no idea! 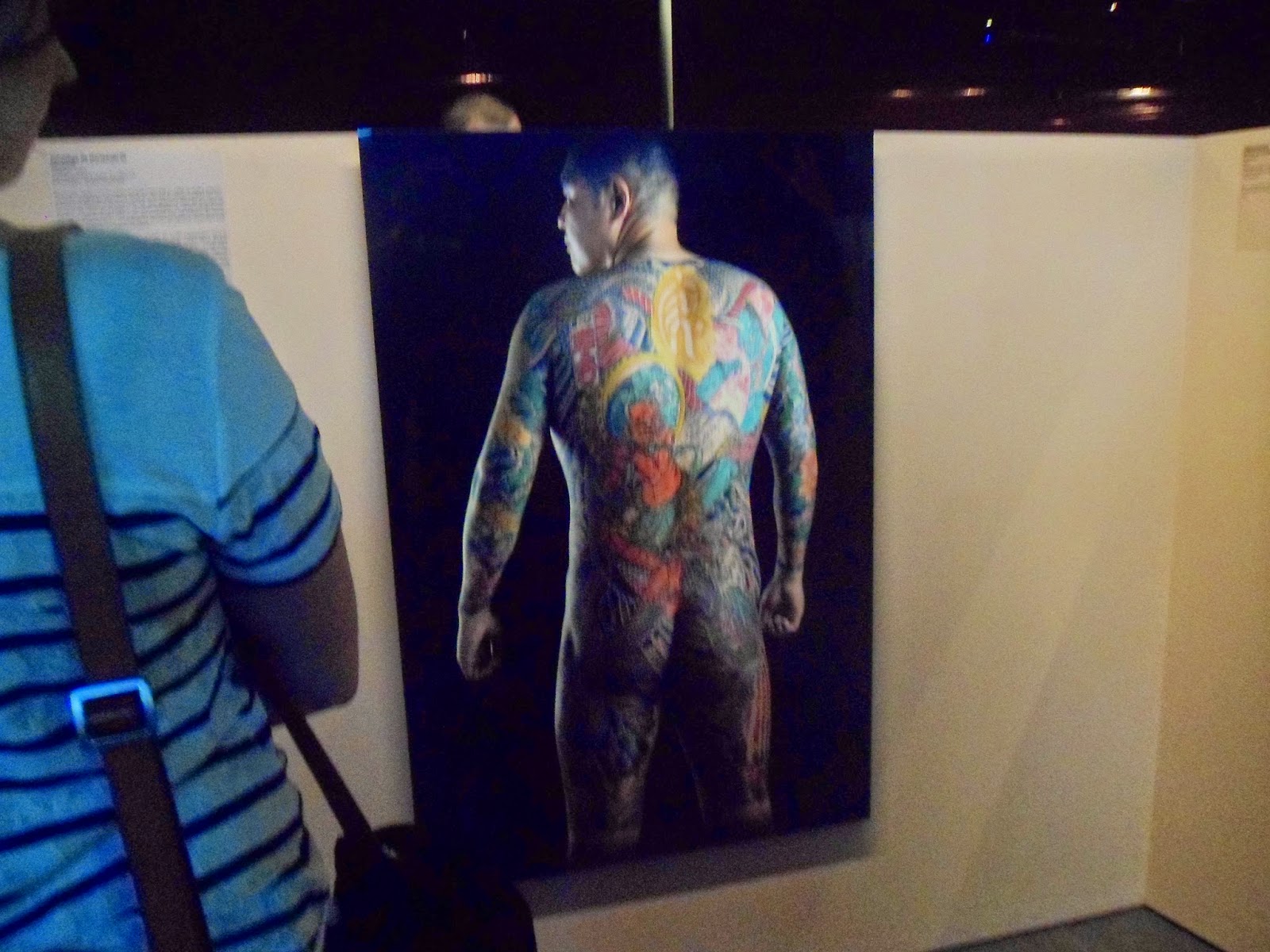 The only thing I didn't too much like about the exhibit was that they had tattooed body parts (either real or silicon molds) on display throughout. There were portions of real tattooed skin and there was even a real, shriveled, tattooed arm! I understand why showing these items is necessary when discussing tattoos; in fact I applaud the  organizers for covering all bases to make sure the exhibit was thorough. But I just couldn't look at the body parts for more than a few seconds. Don't expect to find any photos of them because I didn't take any. Also, I just realized while writing this that Africa is pretty much absent. Don't know what that's about, but I highly doubt that populations in Africa haven't participated and don't currently participate in a practice as hold as tattooing.

The exhibit "Tatoueurs, tatoués" will be at le Musée du quai Branly until October 2015, so if you'll be going to Paris within the next year and a half, I highly recommend this exhibit. I'll have to go back sometime so I can experience the rest of the museum.