Saturday was such a great day! I was out for about 12 hours and I came back in such a good mood! 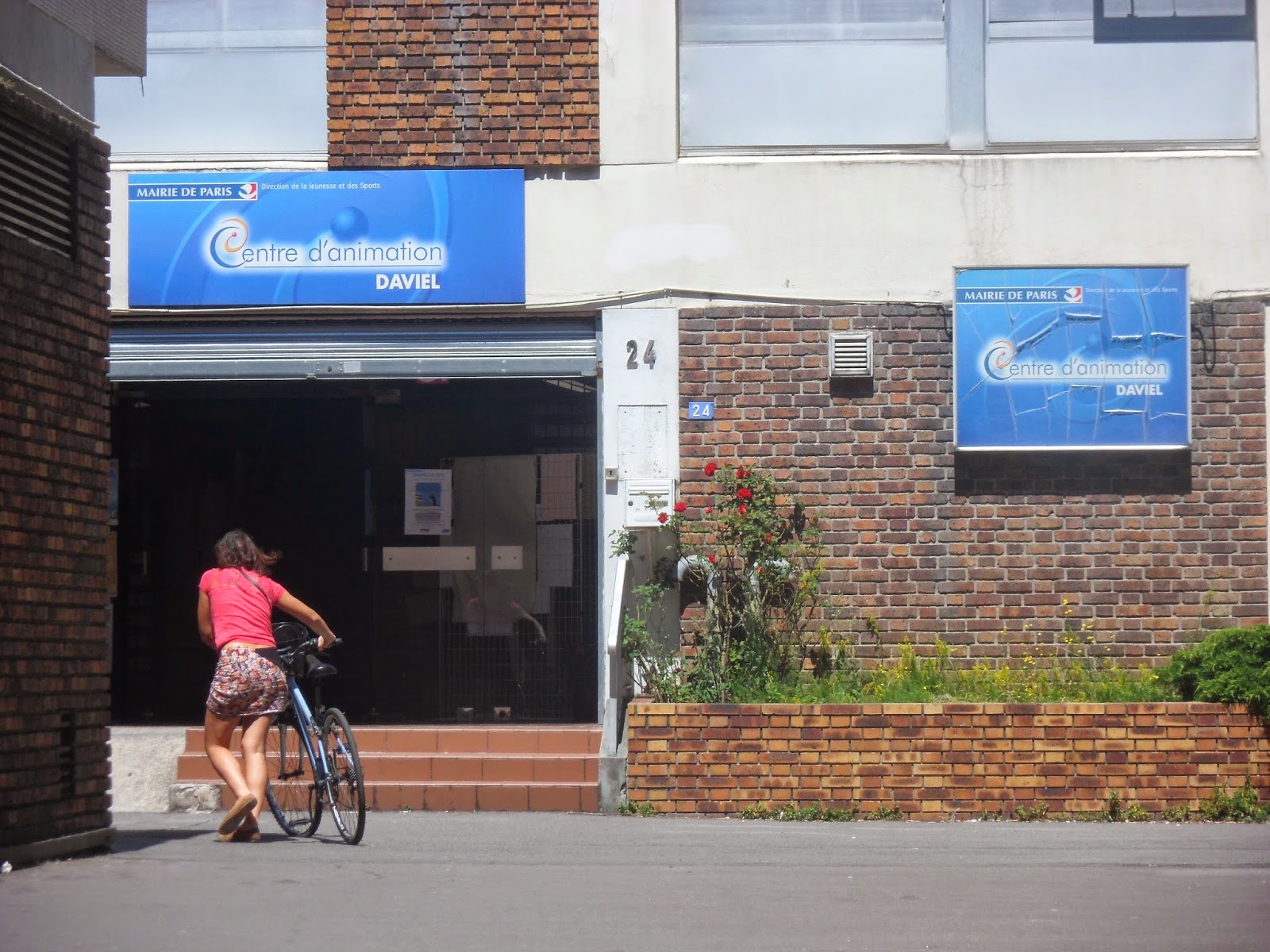 My host mom's daughter (let's call her T) takes singing lessons, and all the people in her class were participating in a recital this past weekend. She sang Sunday, but she was going on Saturday to support her friends and invited me to come along!

The recital was at Centre d'Animation Daviel, which is in the 13th arrondissement (the south eastern edge of Paris, not too far from Chinatown). It ended up being a lot longer than I expected (about 3 hours), and every solo, duet, and trio performed classical songs that I wasn't familiar with. But it'd been a while since I'd gone to listen to people sing, so I enjoyed the recital nonetheless. 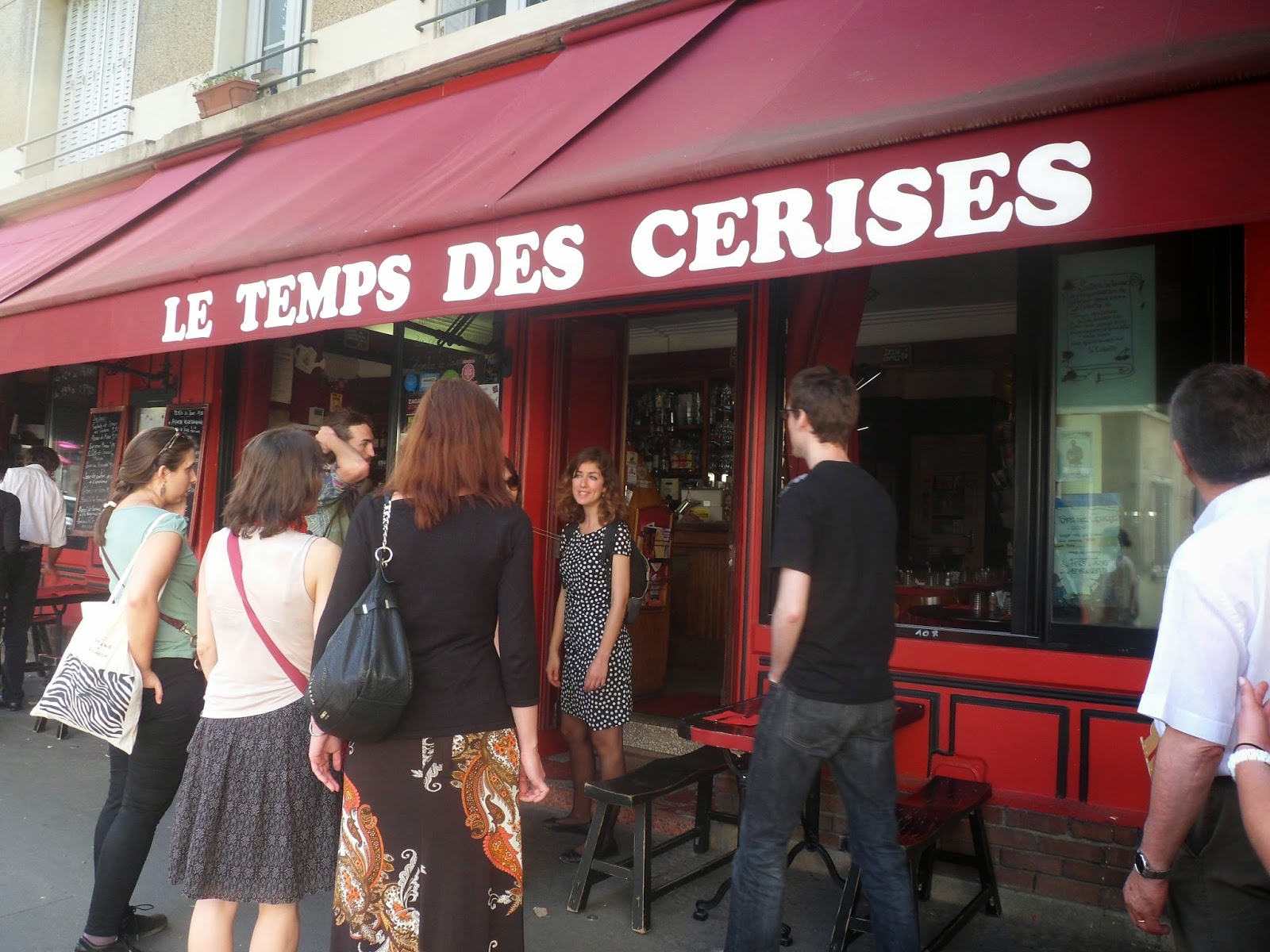 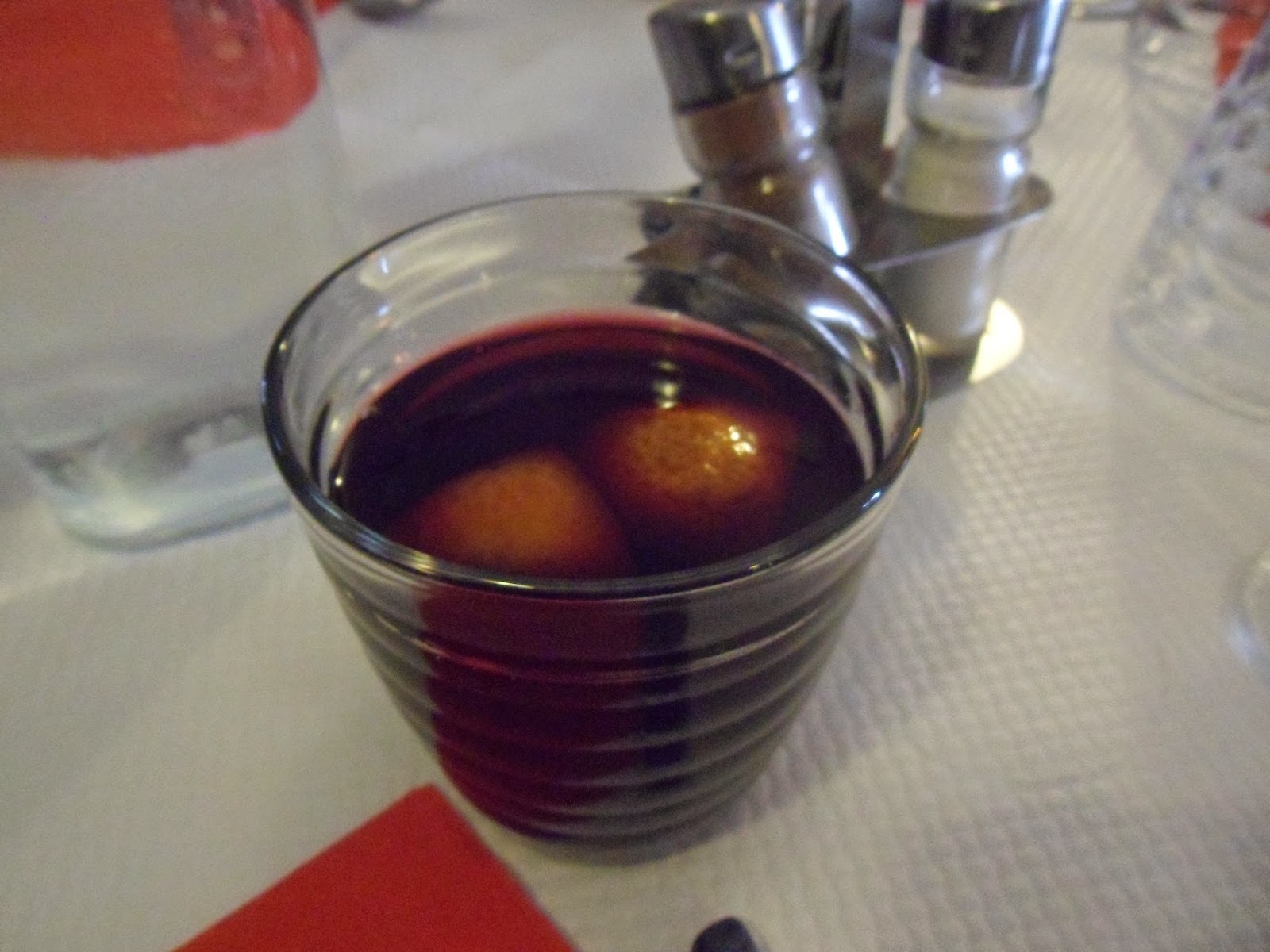 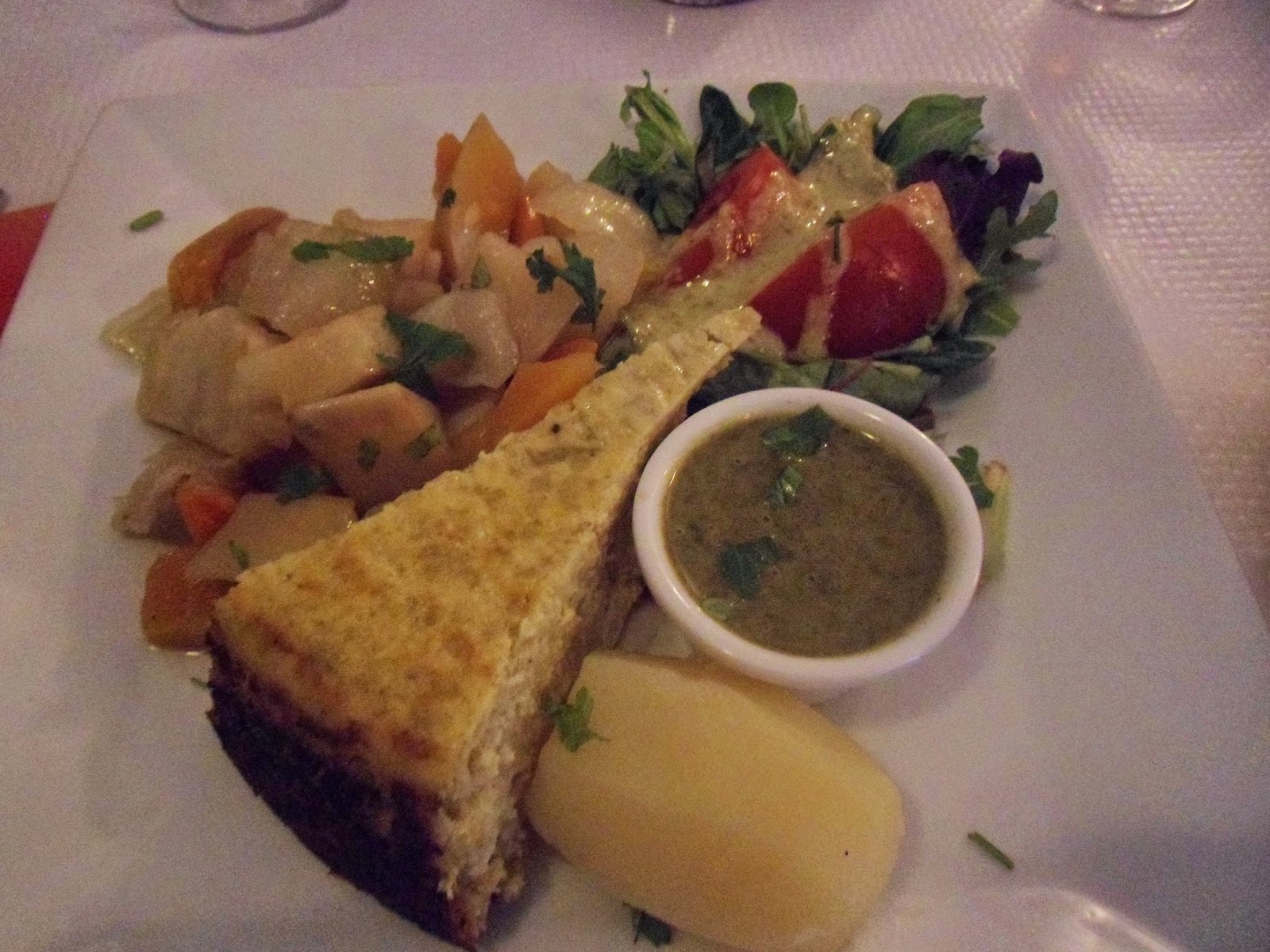 Once the recital ended there were some refreshments and mingling, and then from the recital T, T's friend Clem, and I went to go meet four other friends of Clem's. So when we set out for the evening there were seven of us in total. Our first stop was a restaurant called Le Temps des Cerises. I ordered l'assiette vegetarienne, which included a bunch of stuff I don't know the name of and a salad. Not everyone at our table seemed to be too impressed with what they ordered, but I enjoyed my food. It was filling, it had plenty of vegetables (finally!), and it was something different. T and Clem also talked me into trying Sangria, which wasn't terrible (still don't like alcohol though). The only potentially negative things I noticed about this restaurant are that it's not very chic and the menu is a little difficult to understand. (But really that's typical of French restaurants. You'll find that they often dress menu items up with fancy names and descriptions, rather than just calling a thing a thing). But I found it to be very cozy, and they have a pretty interesting workers/Communist movement theme going on that I hadn't seen in a restaurant before. 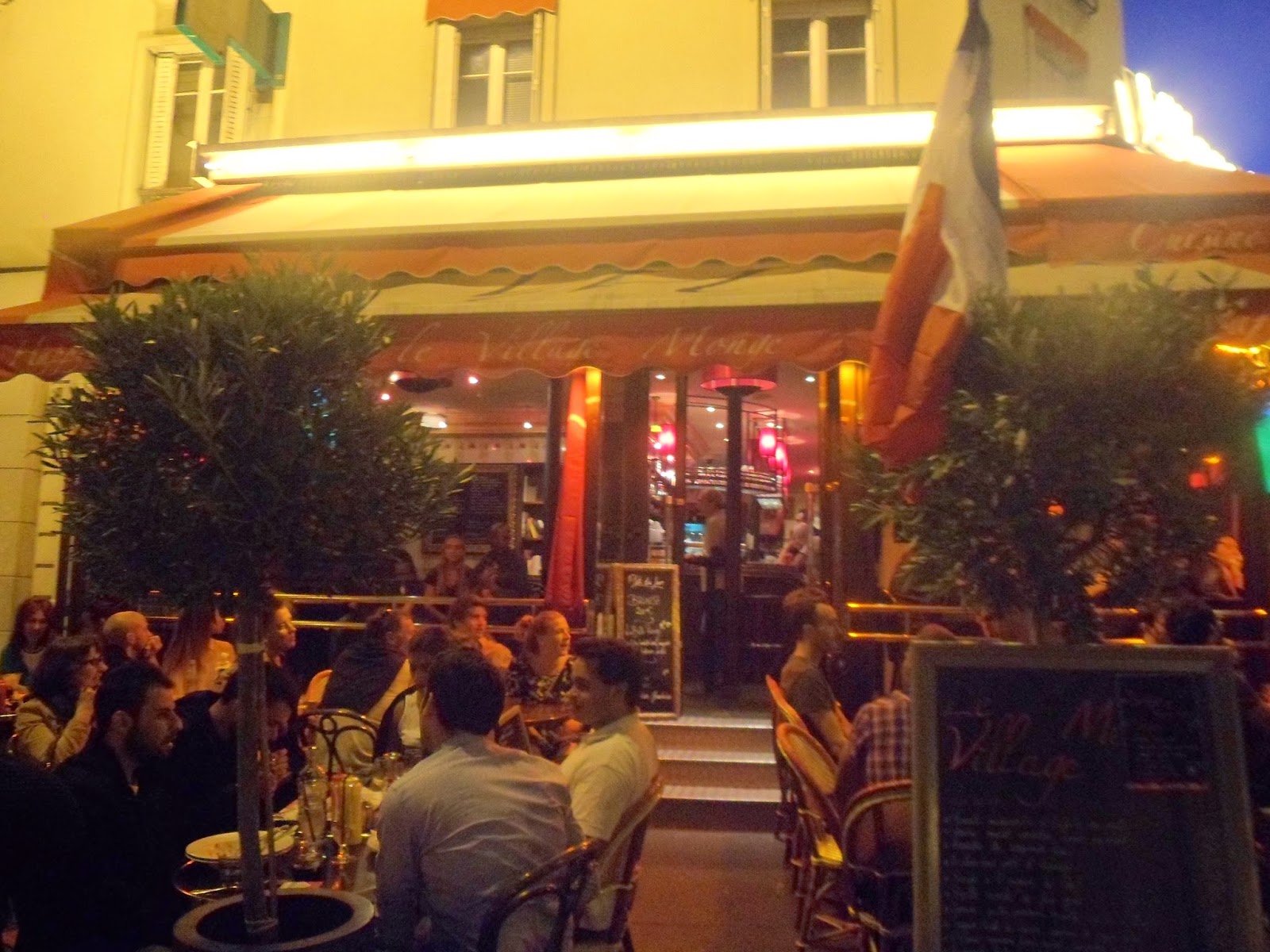 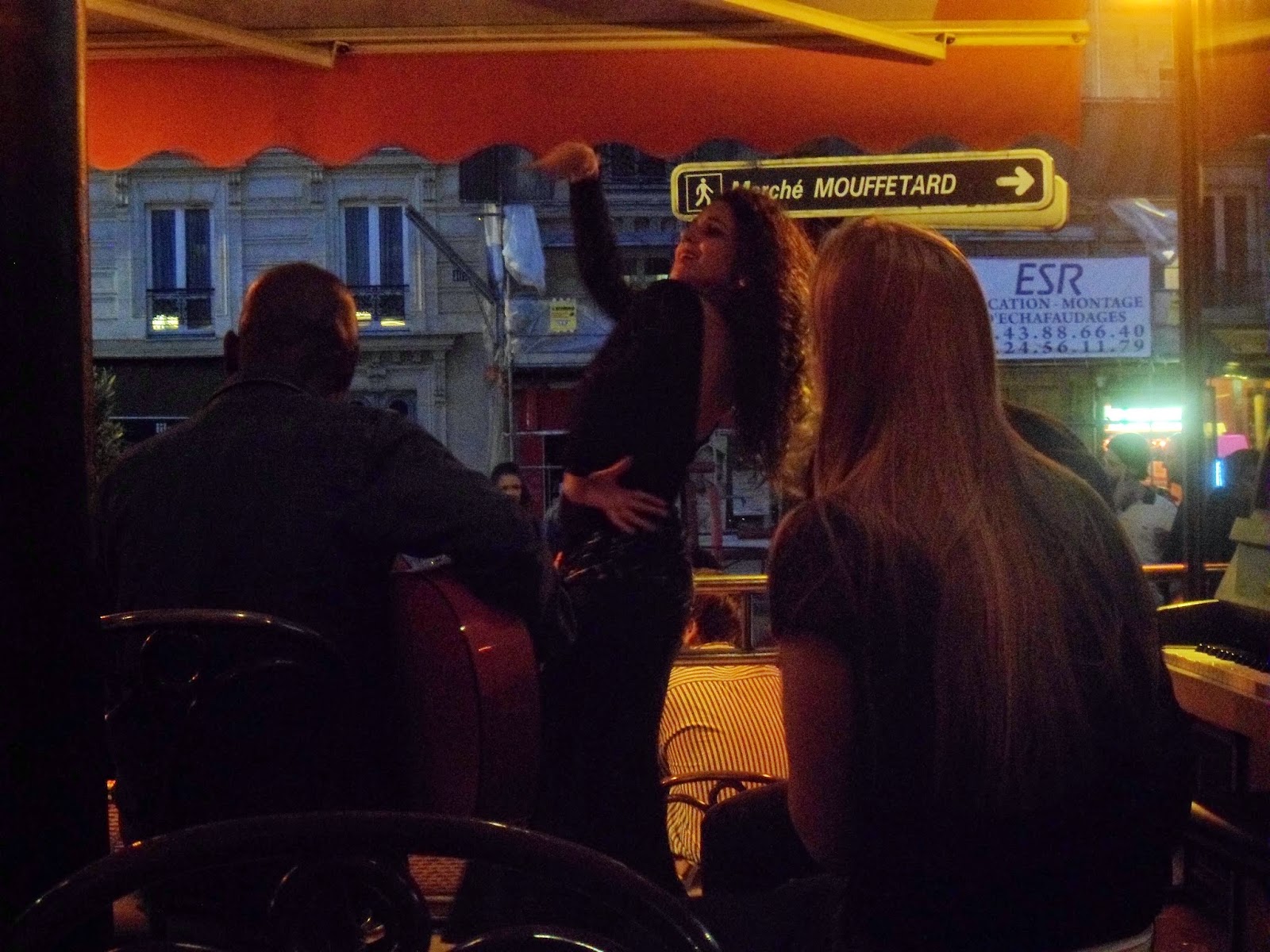 In addition to being the first day of summer, this day (June 21) was La Fête de la Musique in Paris. As T and Clem explained it to me, this annual festival was started to "démocratiser la musique", or make music accessible to everyone. You have to pay a fee or get some sort of licence to do gigs here (especially in public places), and many artists can't pay or don't feel like they should have to pay to share their music. La Fête de la Musique is a chance for artists to peform with much fewer restrictions, primarily on street corners, in parks, in plazas, and in or in front of restaurants/cafes. Meanwhile everyone else has a plethora of options to spend a night on the town listening, grooving, dancing, or singing along to various genres of music. From Le Temps des Cerises we passed through Place d'Italie, where an Italian band called Medea got the crowd and passersby moving with some reggae-influenced rock. Then we passed by Le Comptoir des Arts (restaurant/cafe) were a jazz band was playing out front. We were actually on our way to enjoy some flamenco music and dancing... but we got to the location and there was nothing there. One of Clem's friends even joked, "Out of the three options we had, we chose the one that didn't exist!" So we settled for Le Village Monge (restaurant/cafe) where flamenco dancer Aurelia Bottero was doing her thing
accompanied by a two-man band. 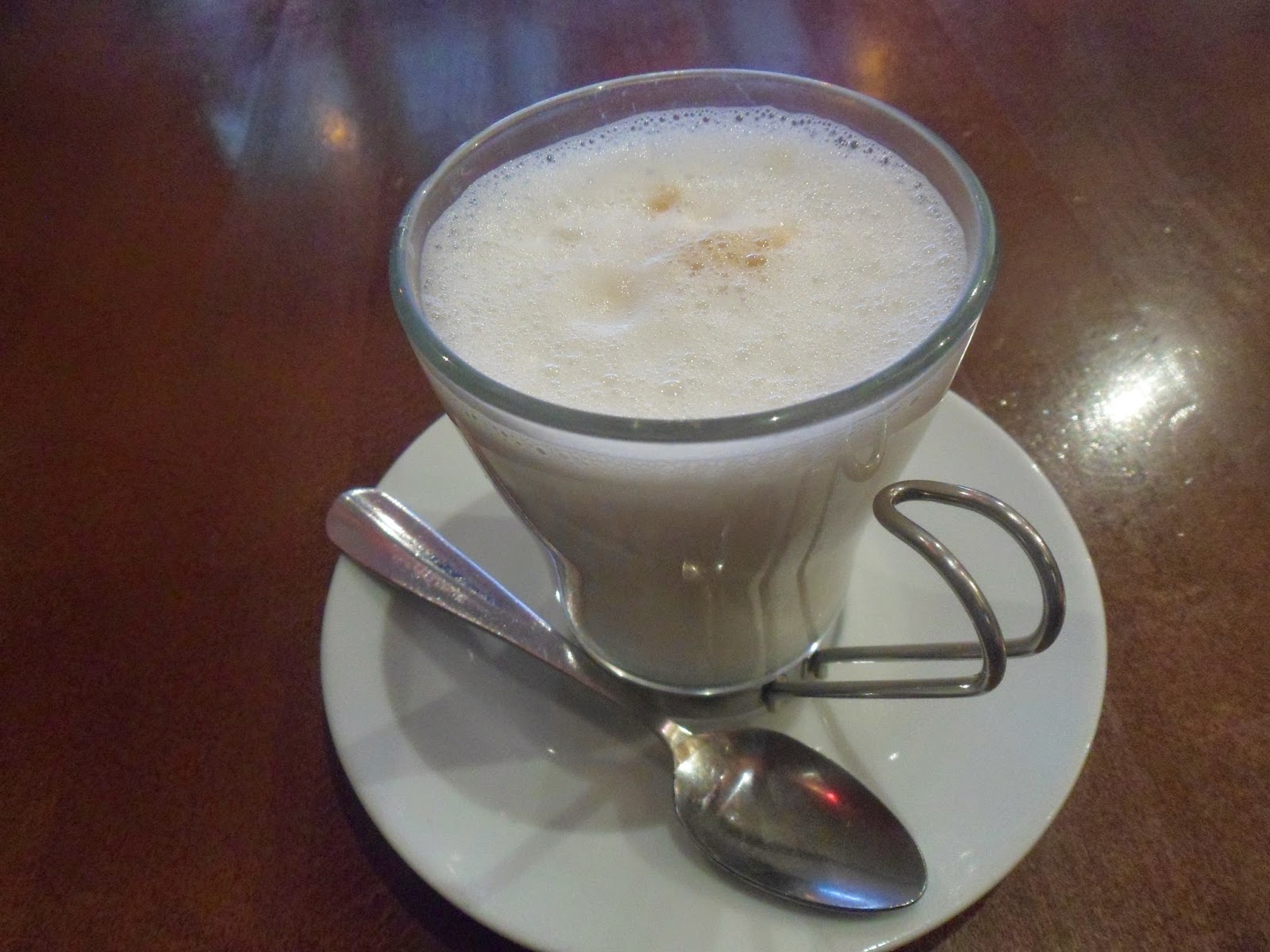 We sat there for a couple of hours drinking (hot milk with vanilla for yours truly) and talking . Something I've noticed that Parisians like to do is spend hours at a cafe or a restaurant conversing, people-watching, and taking in the atmosphere around them. That always seemed like a boring and inefficient use of time to me, someone who always has to being doing something. But after sitting there with the girls on Saturday, I think I'm starting to understand the appeal.

After it got dark we left and headed back to catch the metro at Place d'Italie. Along the way we passed by CASA France Espagne (restaurant) where El Hacha y Machete was playing salsa music and people were clapping and dancing... and all this was happening on the sidewalk! The place was on fire and we could feel it just by watching from across the street. I think that's the kind of setting we'd originally been looking for and didn't find. But hey, at least we got a glimpse of it before calling it a night.

To sum things up Saturday was a pretty chill day, with lots of walking and head-bobbing and laughing and getting to know new people. I might not ever see Clem and her friends again, but that's okay. During the few hours that we shared each other's company, we all got along and had a pleasant time. And besides, a valuable lesson I've learned recently is that you don't have to file everyone you meet away in your list of contacts or FB friends. Much thanks to T for inviting me!