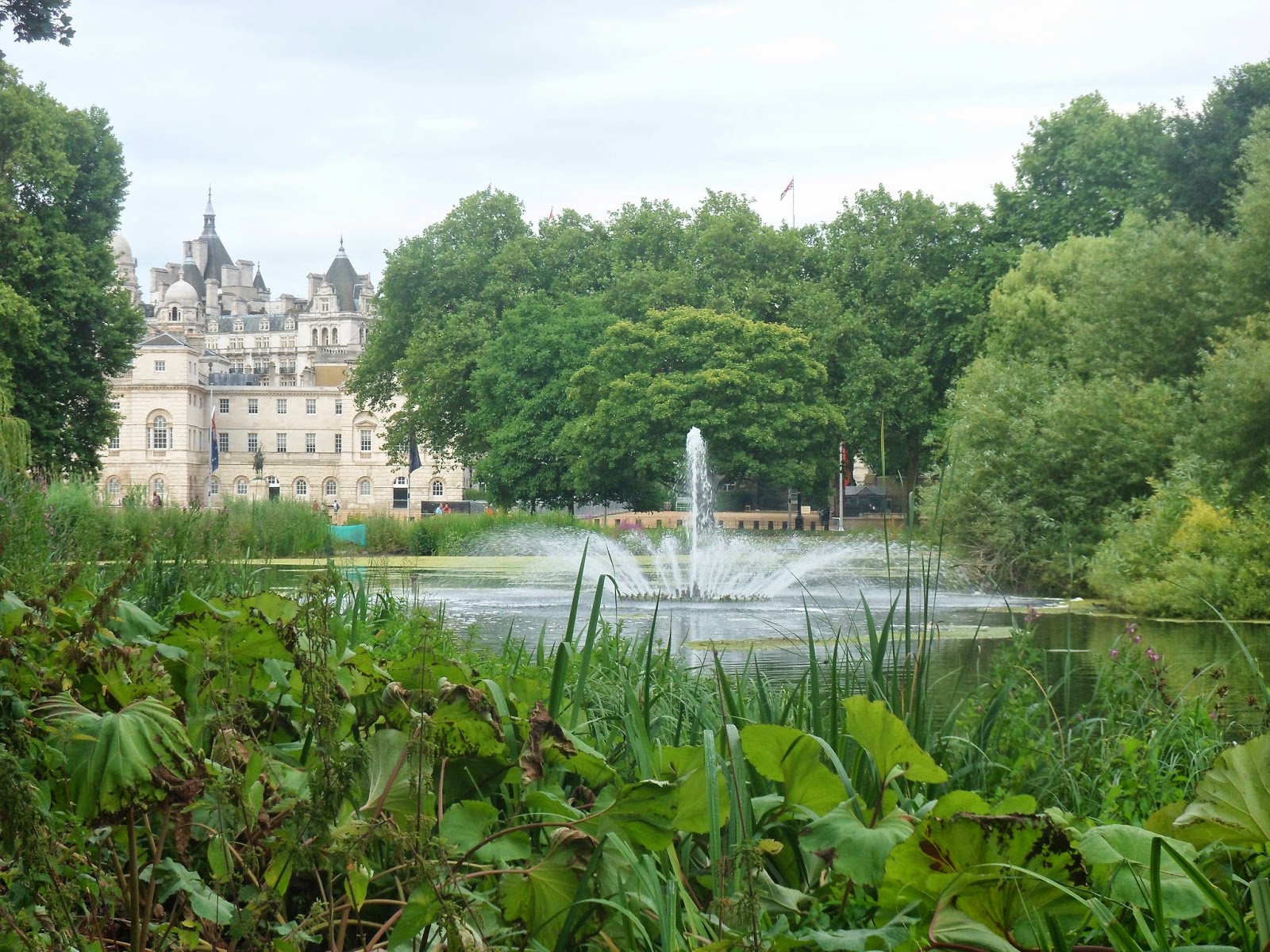 As I'd mentioned, we were going to  go see Big Ben after leaving Traflagar square, but as we were walking Anna realized we were in close enough proximity to make a detour toward... Buckingham Palace! So we went there instead.

We took a nice stroll through St. James's Park to get there. We walked along the lake, admiring the beautiful scenery and observing the ducks, geese, and various other birds as they went about their business. 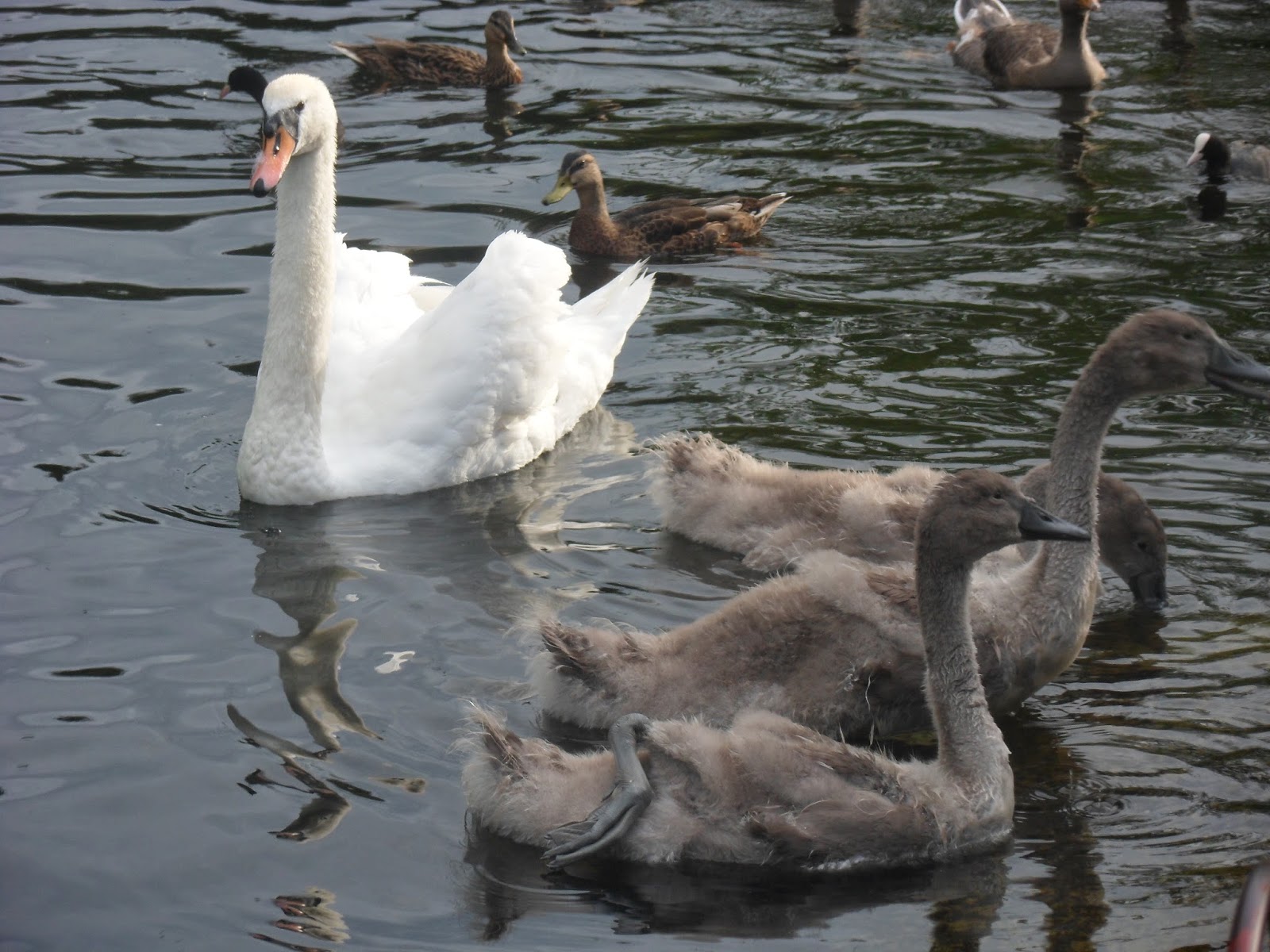 There were even a couple incredibly gorgeous swans! One of whom was watching over his/her cygnets as people approached to feed them and get a closer look. Everything was just so green and serene and picturesque, with so many waterfowl. Being there reminded me very much of walking along Avon River in Stratford, Ontario. 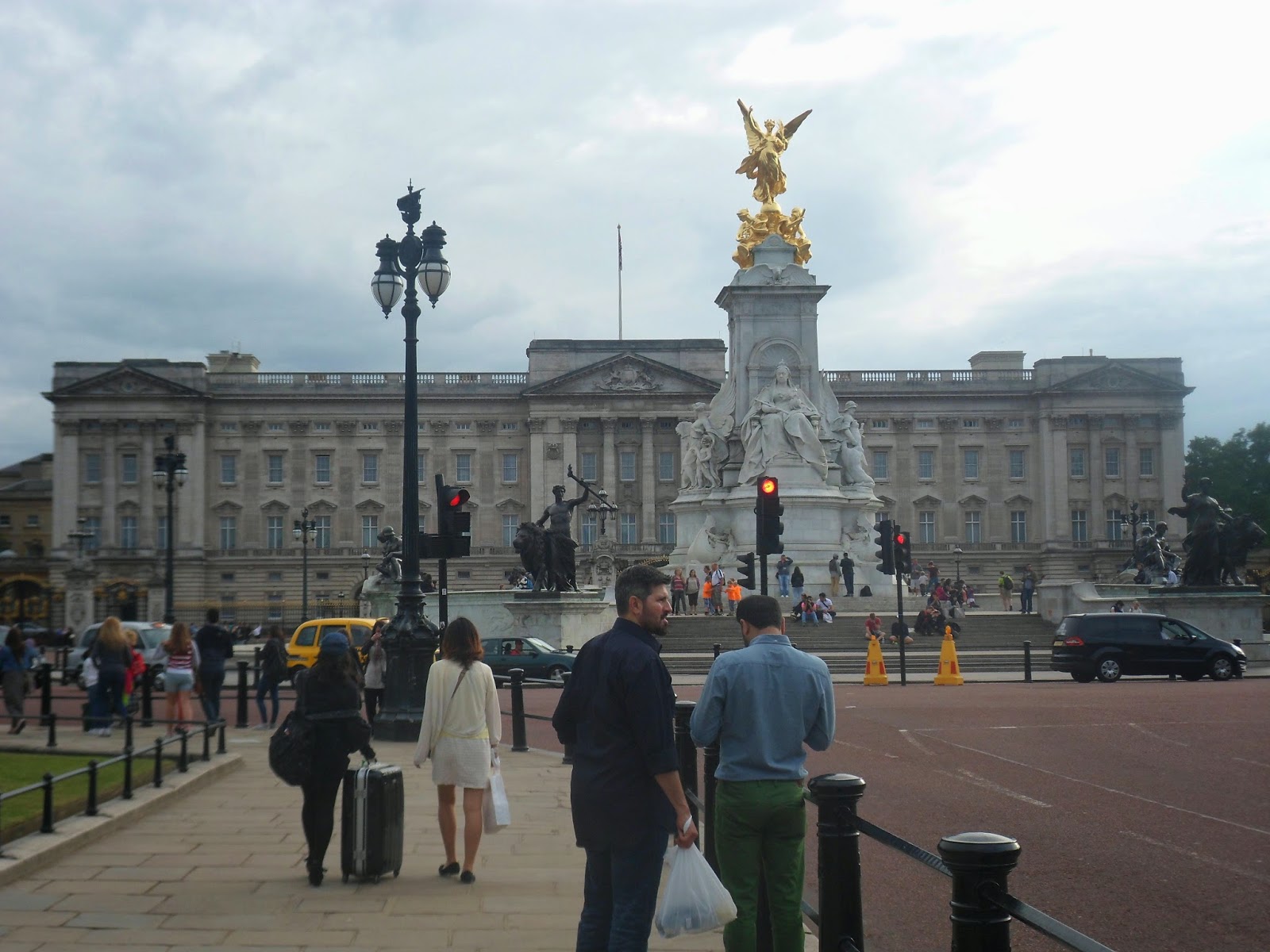 After taking our time passing through St. James's Park we arrived at Buckingham Palace at the other end. In case you were wondering, no, we did not catch a glimpse of Queen Elizabeth II. In fact, the palace isn't the Queen's official residence and she's often not there. So for the most part, it's safe to say that unless it's been announced or otherwise indicated, the people who stand outside the gates expecting to see her or someone else who's really important are wasting their time. 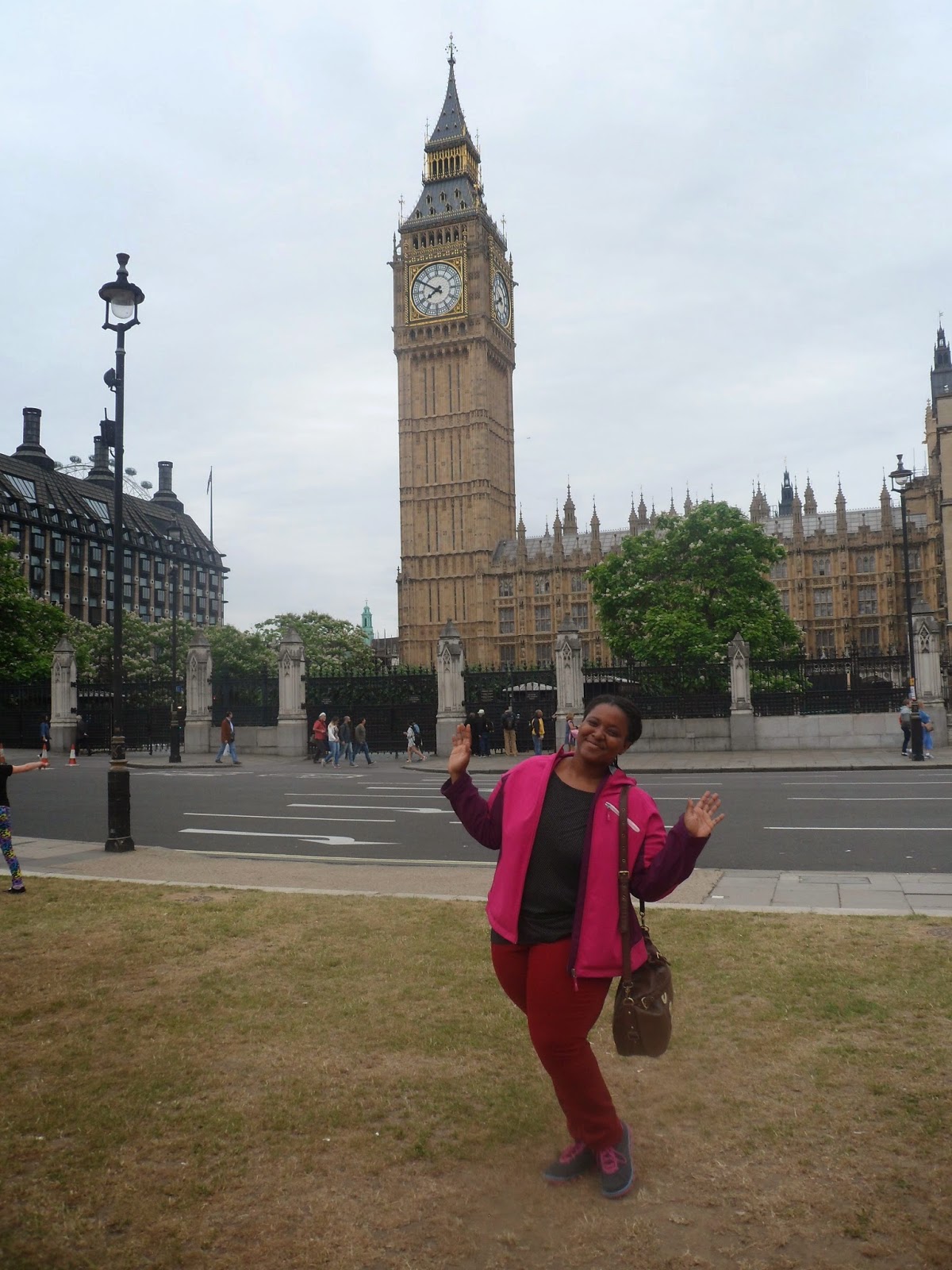 From there we passed through Green Park and hopped on the tube, getting off at Westminster. We came up the steps from underground and there he was! Big Ben! Right across the street! I was busy taking it all in when Anna casually mentioned that I hadn't posed for a picture in London yet... and this would be a great spot to take one... I explained to her that I prefer being behind the camera, but she wasn't having it. Uggh. So I reluctantly handed her my camera and made the first pose that came to my head. This picture only exists because I knew Ma would want to see it. So there you go Ma. I hope this makes you happy. 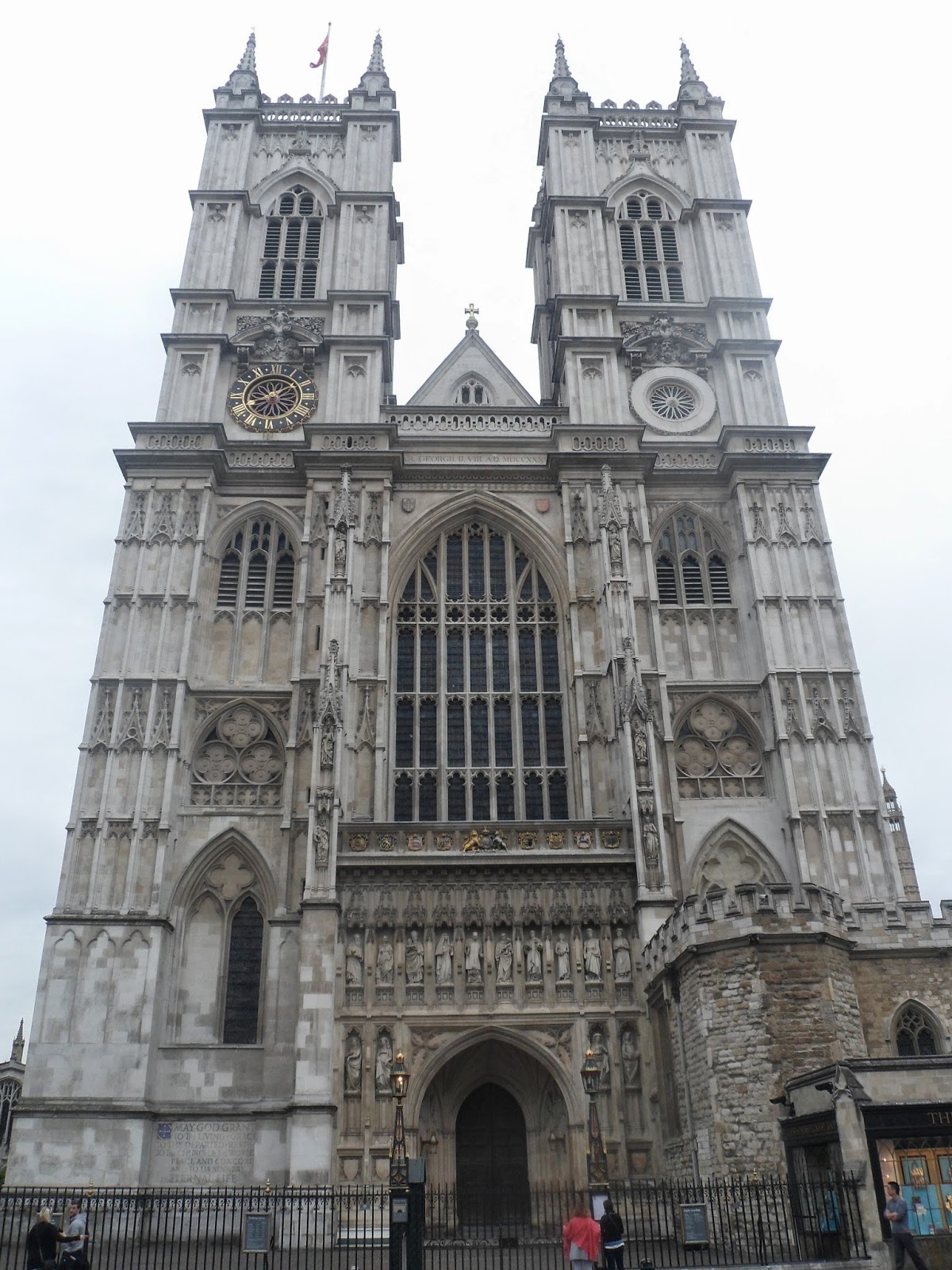 Next we walked around the adjoining square to pay respects to the Nelson Mandela statue before crossing the next street over to get an up-close look at Westminster Abbey. For those of you not familiar, this is the church where Prince William and Catherine Duchess of Cambridge (William and Kate) got married. It's also over 1,000 years old (founded in 960) and is the coronation and burial site of numerous English and British monarchs. It was closed when we got there, so we just stood in front of it for a few minutes taking pictures and standing in awe of its magnificence.

Then we walked back the way we came and crossed Westminster Bridge, taking in spectacular views of the River Thames, Big Ben, Houses of Parliament, the London Eye, and the London Aquarium all at the same time. We took a break to sit and enjoy all that was going on around us as the sun was setting. 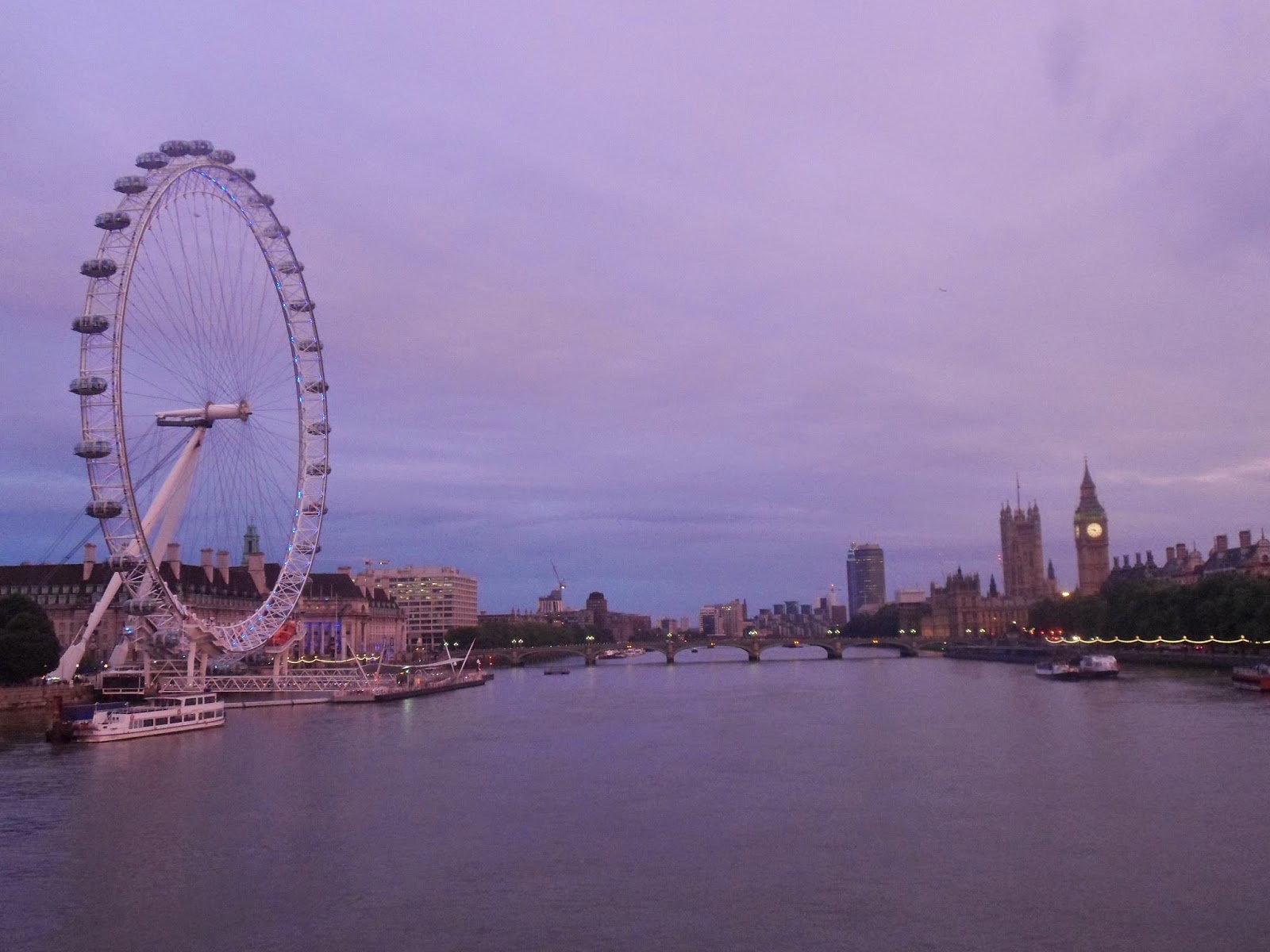 From the bridge we continued along the Thames passing the Eye, Jubilee Gardens, and the Udderbelly Festival before climbing the steps of Hungerford Bridge to start making our way back to Anna's place. We crossed this bridge slowly, taking one last long look at all the wonderful sites we'd just passed by. Lights on the bridges and along the water flickered on, and Big Ben lit up just as we left.