After having such a wonderful time spending spring break in San Francisco last year, Ma and I decided to embark on our 2nd annual mother-daughter trip. Our destination: New Orleans! 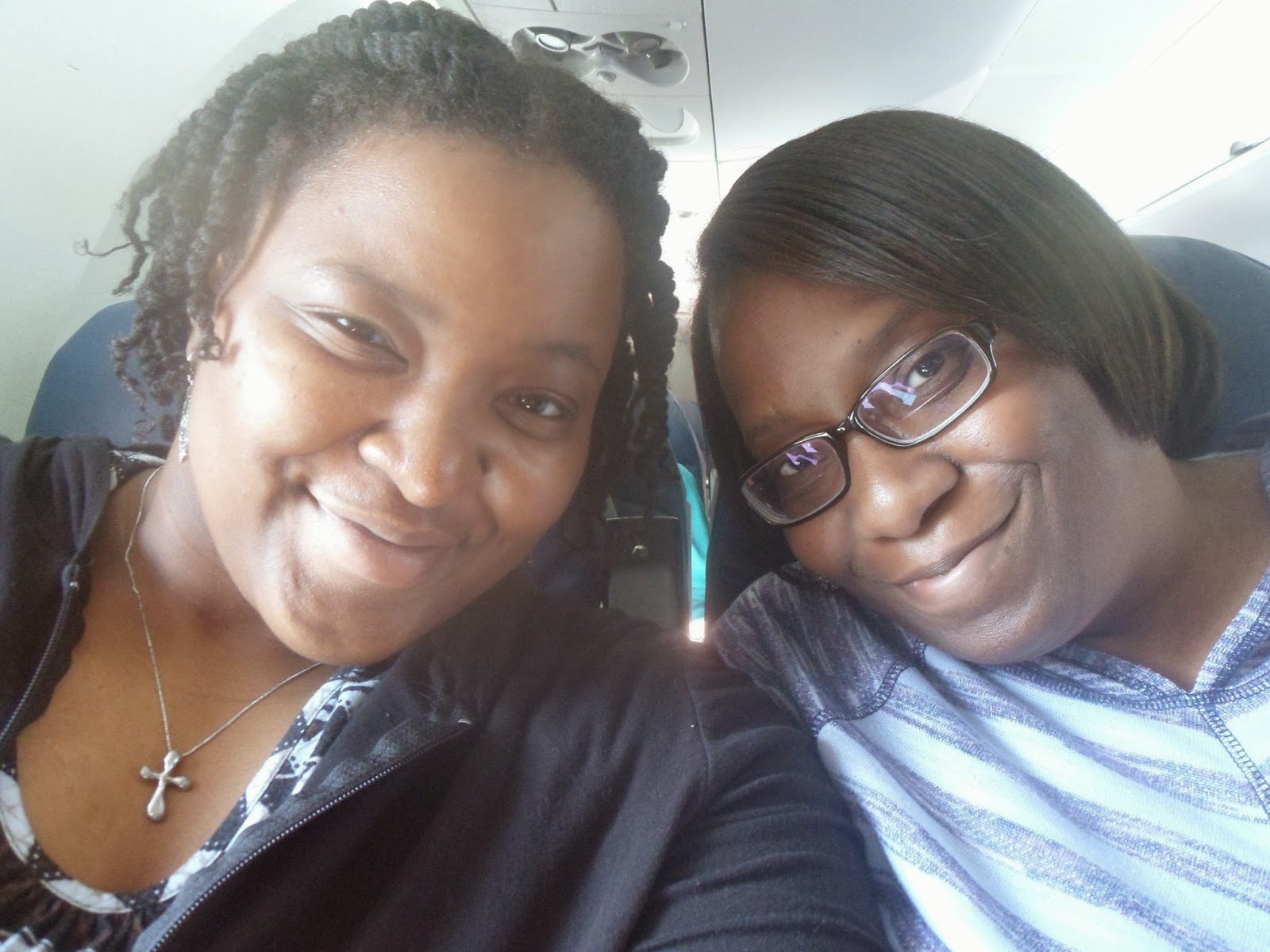 We'd actually planned on going to NOLA last year, but my spring break coincided with Mardi Gras and Ma wasn't about to deal with all that. So we went to San Francisco instead. Since Mardi Gras would take place two weeks before spring break this year, we decided to go for it. Us not being the partying type, we figured it'd be more doable since the craziness would've gone down to its normal level by now. So we'd hoped... 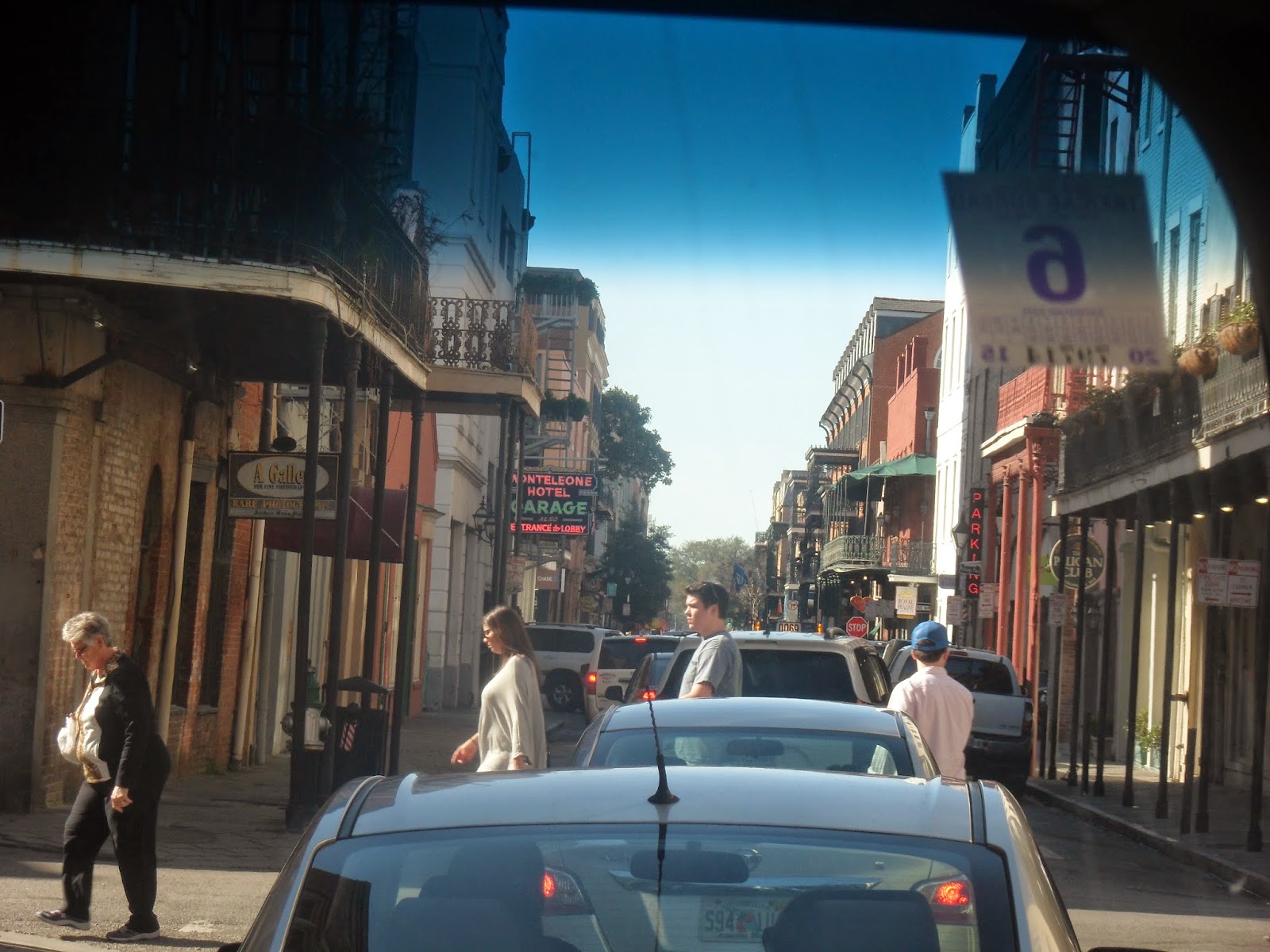 After a rather short two-hour flight from Detroit to New Orleans yesterday afternoon, we headed to our hotel by shuttle along with 15 other travelers. We were the second to last group to be dropped off, so we got a nice impromptu tour of the French Quarter (or simply, "the Quarter") as the driver was dropping off everyone else. Bienville, Dauphine, Iberville, Decatur, Canal, St. Ann, Royal, Orleans, Toulouse, Bourbon... we rode through all of these streets, and in that order. It was a little unsettling at first because it wasn't even 4pm and hordes of people were already sauntering up and down the streets with their vim, their noise, and their open containers. But then you remember you're in the French Quarter, so you just have to get with it. Oh... okay. Folks don't get down like that back home, but alright then. Carry on. 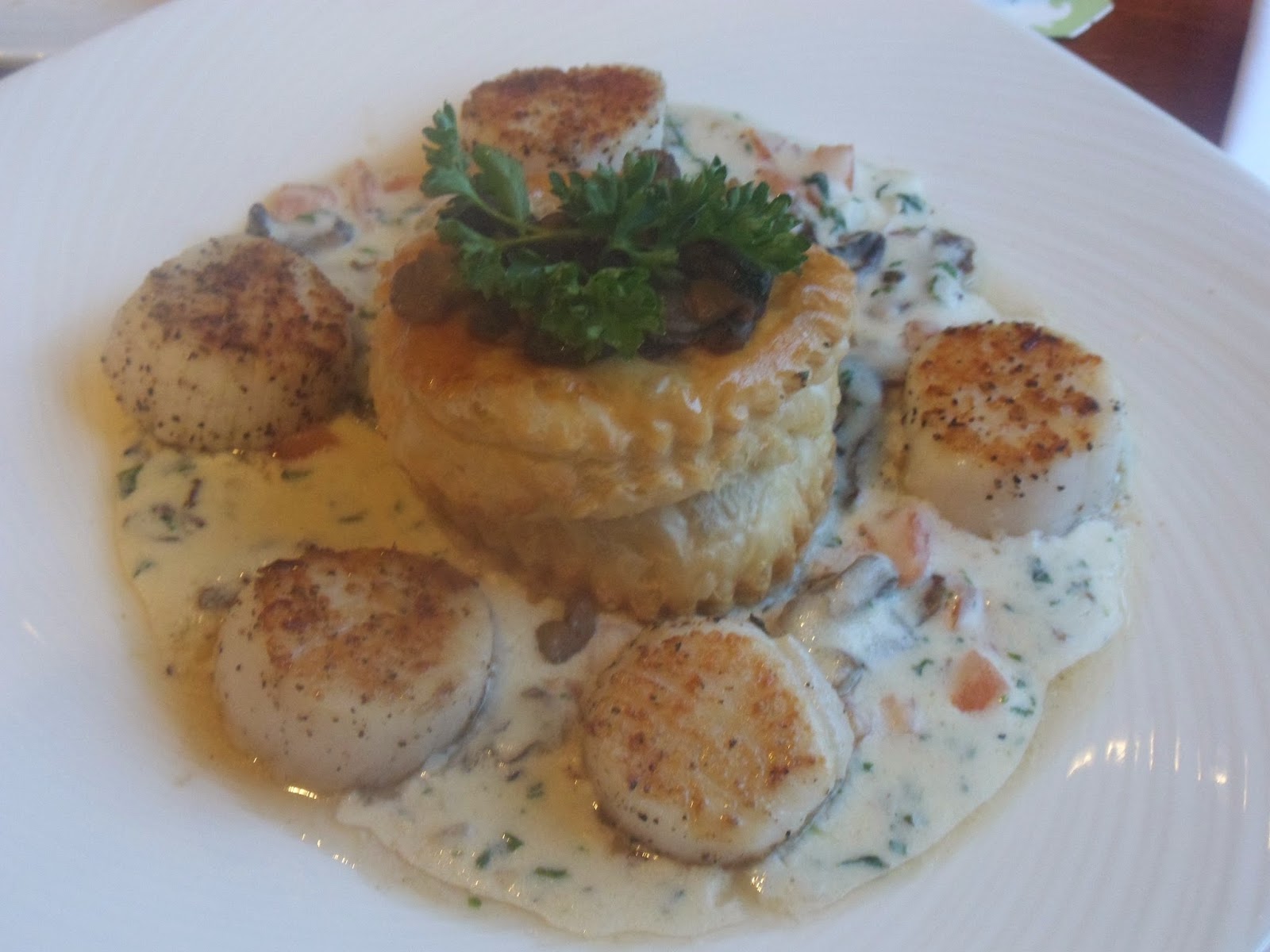 Our hotel happens to be on Bourbon Street, which means we're smack dab in the middle of the action. But up on our floor you can't hear anything from the streets, so we managed to get the central location without the disturbed peace. Nice going, Ma! Our hotel also happens to be at the site of the old French Opera House (Théâtre de l'Opéra), which existed from 1859 to 1919 as a staple of New Orleans high society and the elite arts scene. For dinner we opted for the hotel restaurant Café Opéra, a French restaurant named for the building's past. Ma had the special, which was some sort of crab something, while I had the scallops vol au vent.The presentation was excellent but the food itself was just okay. However the service was pleasant, and the chef even stopped by our table to greet us. Not a bad start for our first meal in New Orleans, but also not a very impressive one. 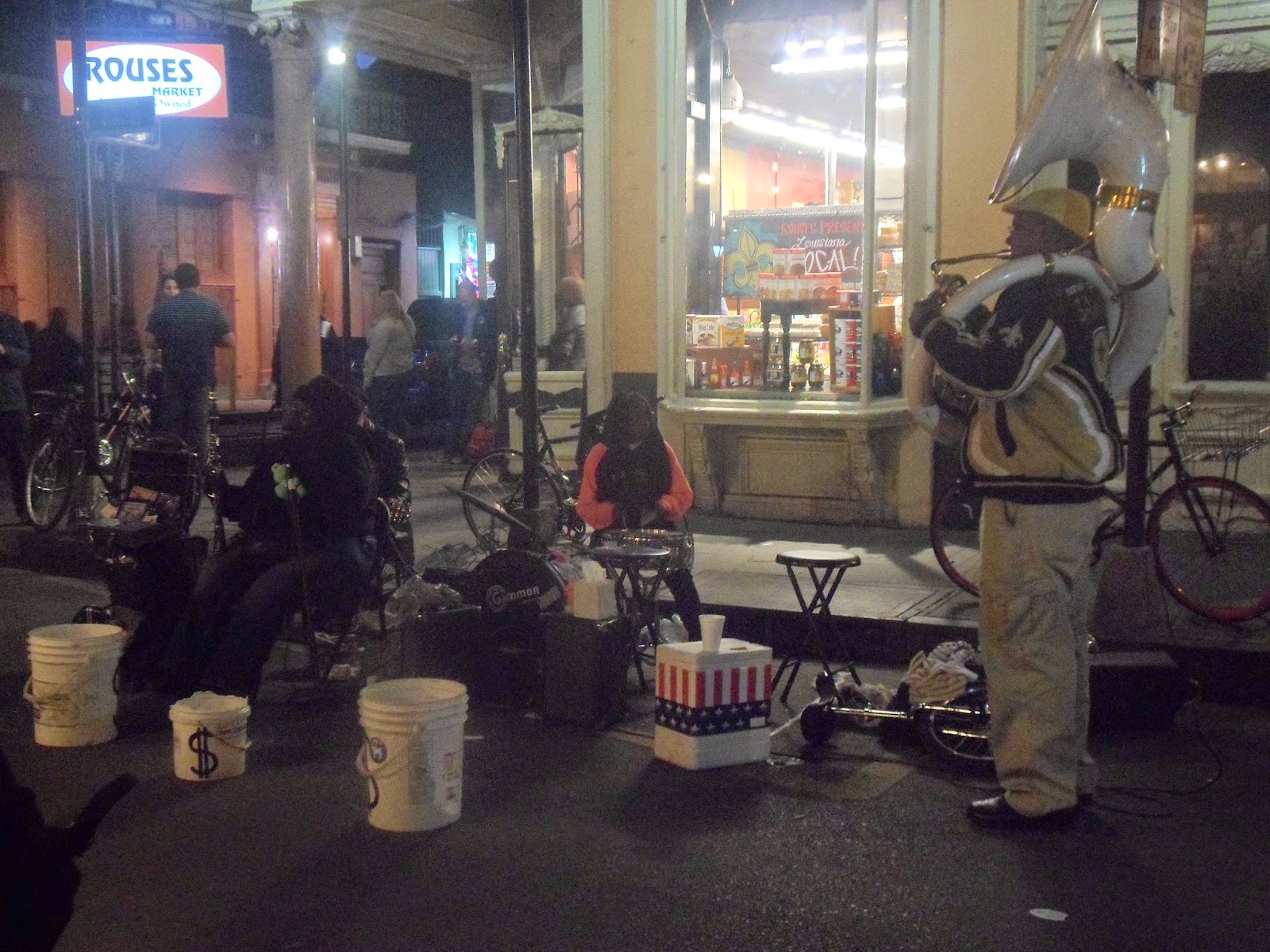 From there we meandered through The Quarter heading toward  Café du Monde, a restaurant known for its famous beignets and café au lait. Along the way we passed two of many musical acts who were out making magic in the streets last night for passersby to enjoy (and to show their appreciation monetarily, of course). People playing music out in public is such a natural thing in this city that it's more than mere spectacle. It's more like an essential part of life here, and audience participation is often encouraged! 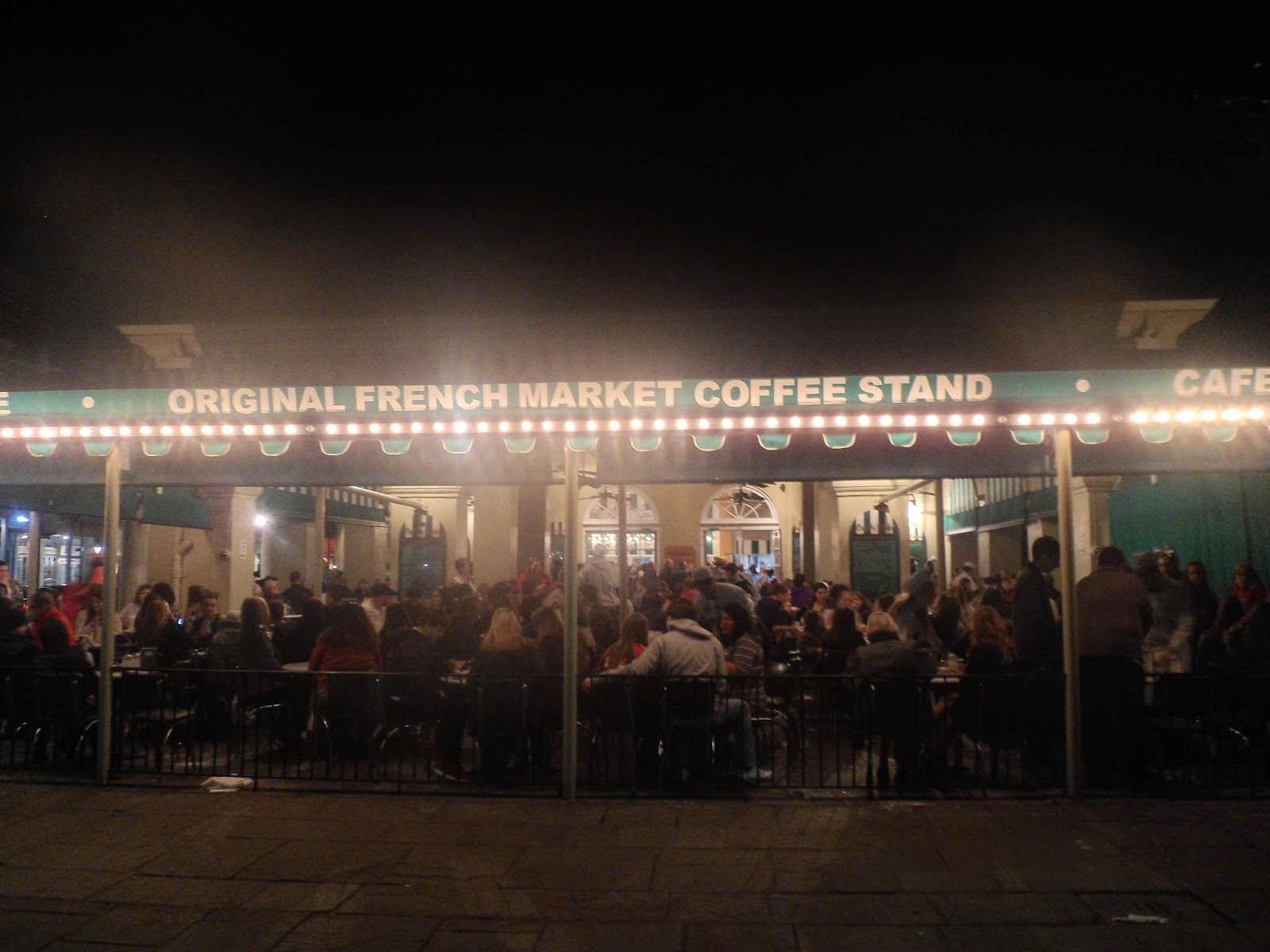 In no time we came around from behind St. Louis Cathedral and along Jackson Square to the O.G.
location of Café du Monde, which is on Decatur Street. This is where the fried, powdery goodness all began, back in 1862. You can order to-go from the window or seat yourself for table service. Only problem was, everyone and their mama was there! The to-go line was a mile long and there were no empty tables. We wanted to sit and enjoy the food since we had plenty of time, so Ma and I split up searching for place to sit. I just stood around watching people for a few minutes, until I got the hang of it. 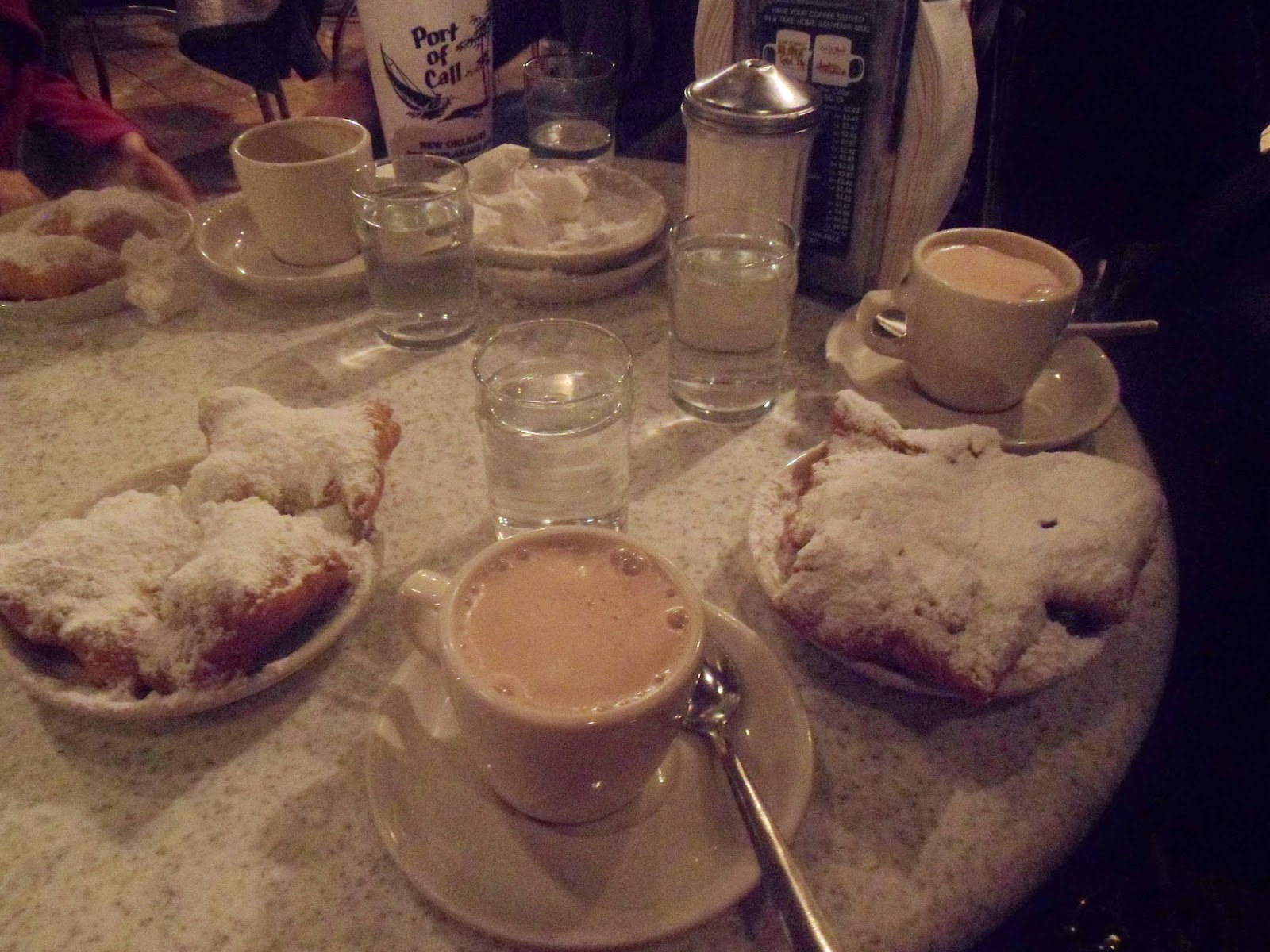 The key is to rush to a table as soon as you see people getting up from it, and sit right there before anyone else does. Dirty dishes, trash, germs, warm seats, and all. Then the servers will come to you, clear the table, and take your order. I snagged a table this way, beating a young couple from Alabama to it. But since it was just me there at the time, they asked to share and I obliged. When Ma finally found us, she wasn't bothered by it either. The damage? Two orders of beignets (3 each) and two small hot chocolates for the both of us, all for just $10.60. So fluffy, and sweet, and gooey, and messy, and delectable, and so bad for you! I probably won't eat that stuff ever again because I know I don't need it, but I'm so glad that I was able to enjoy it, just once, in the restaurant where it originated. 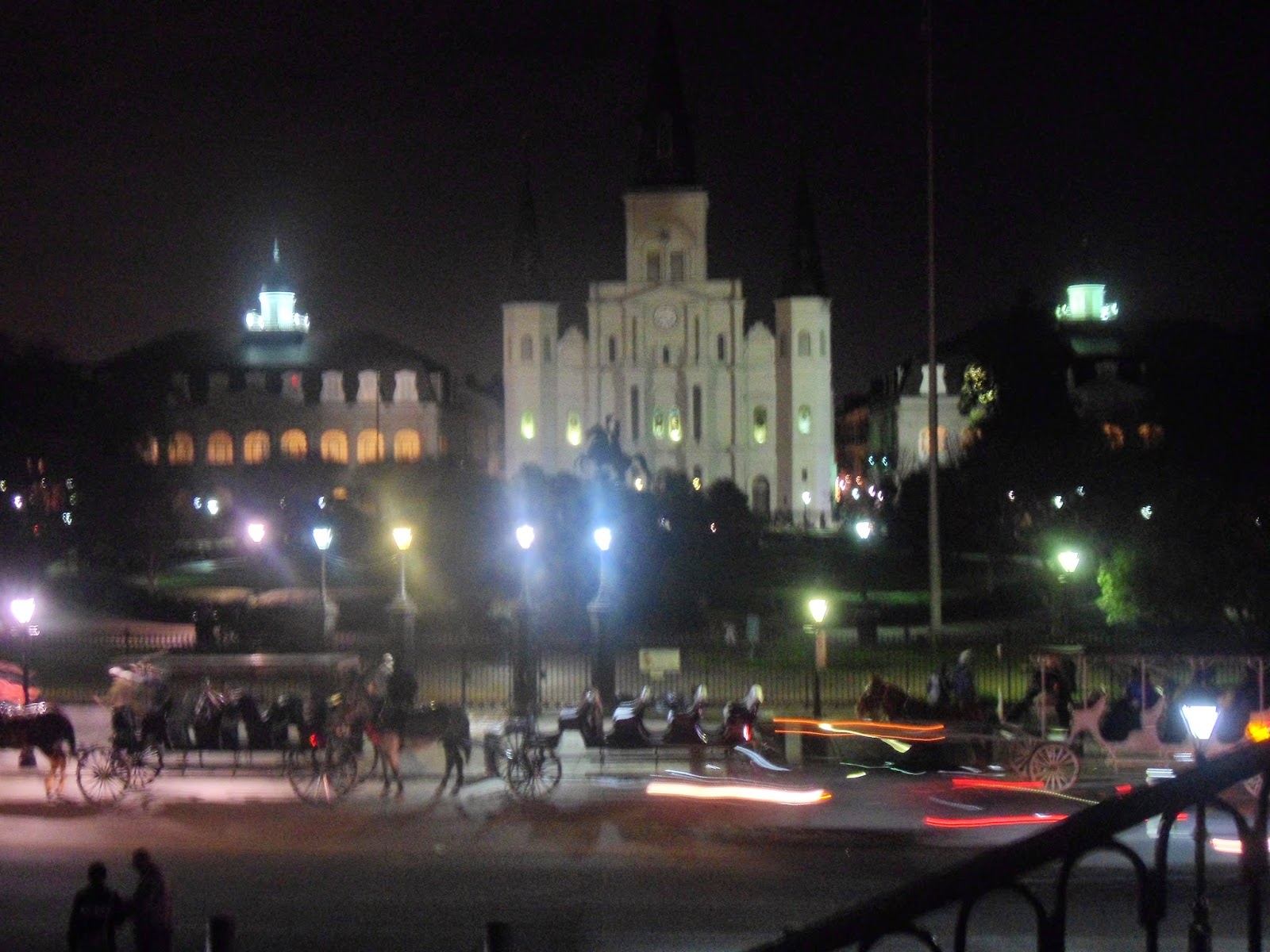 From there we admired the night view of Jackson Square, and then walked up and down Decatur Street before returning to the hotel. Ma napped while I wrote this post. We were exhausted and were almost tempted to stay in. But even with the mounting madness outside, I insisted we venture back out since there was one more place that I wanted to visit...

Be sure to check out part 2! Click the link below for more photos!