I spotted this book in the "mystery" section while shelving at the store a couple months ago. Set in San Francisco, starting in the Japantown neighborhood. The setting spreads out to multiple locations in Japan. Main character is an American born-and-raised in Japan up until his teenaged years. The book's written by an American expat who's been living in Japan for over two decades. Tidbits of Japanese language, history, and "Japan Inc." scandal are included here and there. The title, cover design, back cover synopsis and reviews work together to scream "San Francisco! Japan! Considerable ounce of credibility!" And thus I was seduced into reading a mystery novel for the first time in Idontknowwhen.

Japantown: A Thriller by Barry Lancet 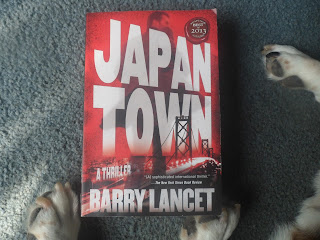 Jim Brodie is a single dad and art dealer who runs an antiques and art shop by trade. But since he also lived in Japan up until age 17, has aggressively practiced martial arts most of his life, and also holds a stake in his father's Tokyo-based P.I./securities firm, he also periodically serves as a consultant for the SFPD on all Asia-related cases. One night, a family of five is murdered in Japantown and Jim Brodie is called in to get to the bottom of it. At the crime scene Brodie notices a piece of paper with a curious kanji character written on it. This same kanji was found spray-painted in the driveway when his wife and her immediate family died in a fire in L.A., as well as at the scenes of other "accidental deaths" in Japan. As Brodie stubbornly investigates the truth behind these murders, he finds himself the target of Soga, an international kill-for-hire organization that's been making people disappear at the request of high-profile and high-power clients for over 300 years. Soga's trying to erase all traces of their deeds, and Brodie's nosing around is holding up their procedure. All  of this is narrated in past tense by Jim Brodie himself.

Basically Japantown is an extremely violent story of how a consultant becomes the middle man, and how this small fish ends up fighting sharks head on while the untouchable big fish behind the whole scheme are too busy running the world in the shadows and using subordinates as pawns. It reads like a movie of dubious quality. Uncondensed, the plot's too thick and outlandish to keep straight on film,  has too much going on, and relies on too much betrayal and backstabbing, too many hidden secrets, and too many (in)convenient coincidences.

But! As a book it's quite the fun guessing game. That's the one aspect regarding mystery novels that I'd forgotten about but have developed a new appreciation for due to reading Japantown. When you read a mystery novel, you're not only reading a book, but you're also playing a movie in your head as you read, and you're trying to guess at all the hidden truths before novel's end. All at the same time! Who's behind Brodie's wife's murder? Who's behind the Japantown murders?  Why were these victims killed? Will Brodie and his daughter make it out alive? Who's really on their side? Barry Lancet spins an engaging and fast-paced web of intrigue and you probably won't guess who's who before he reveals everything at the end.

At first I was convinced of my disinterest in reading the other books in this Jim Brodie series (a second one already published, a third with a 2016 release date, and a fourth "waiting in the wings"). According to the FAQ page on his site, each book is independent of the one before it, so it's not like I'd be missing anything. Please don't misunderstand, this novel's concept is interesting, and the fight scenes are detailed and well-written. But for me, as someone who isn't usually drawn to mystery/suspense/high octane action thrillers,  Lancet's wild imagination overshadows the believability of this novel. What saved it at least a little bit for me is Lancet's passion for Japan and all things Japanese language, history,  culture, and art. He's done his research and uses Japantown as a conduit for sharing said passion with readers, which I acknowledge and appreciate. Japantown may not be the most believable,  but it's more than enough to keep you occupied during those long commutes or other periods of boredom. And for that, I just might give the second book a try. Not with any urgency, of course. But I might.


"Do you know what it's like to see your children go before you? It's a living death, Mr. Brodie. All your life's work wadded up like so much newsprint and thrown in your face. You know that your children and your children's children will not live beyond you, will not benefit from your achievements. When you die, all your work, all your accomplishments, die with you" (54).


"'You're telling me they sell death to grease business deals?'

'To 'smooth over' a buyout or merger, yes. Or to secure a promotion. Or protect their client's already lucrative position. Soga eliminates obstacles or threats when a carefully planned accident makes economic sense. Some would argue that such an idea is a logical extension of your American-style free market'" (213).