My initial acquaintance with Roxane Gay came by way of the Another Round podcast, where she was a guest on Heben and Tracy's first live show ("Episode 13: Another Round LIVE!"). A professor and writer, Gay sounded like a fun, straightforward, brilliant, and accomplished who-gon-check-me-boo woman who's just recently been starting to get the props that she's owed. Then I was walking around the store a few weeks later and came across Bad Feminist sitting on a display table. And I thought─Wait. Roxane Gay... Roxane?? That Roxane?! Oh for sure, I'll make space on my reading list for you! And here we are. 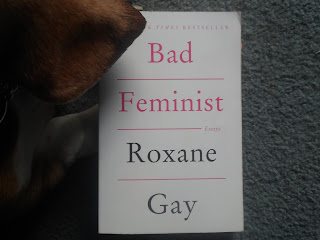 This collection of essays is Roxane Gay's third book, whose title refers to Gay acknowledging her limits and complexities as a human being. She clearly identifies as a a feminist, a definition of which she quotes from the book DIY Feminism as, "just women who don't want to be treated like shit" (303). But feminist practice and theory are actually so vast that Gay can't know it all, and she's aware that the ways in which she chooses to live her life and be herself may conflict with her feminist principles (what habits a feminist "should" have, what constitutes a "good feminist", and so on). Having recognized that feminism was never meant to be monolithic or fool-proof in her introduction, she proceeds to offer her knowledge and analyses of various topics that are organized into five categories: "Me", "Gender and Sexuality", "Race and Entertainment", "Politics, Gender & Race", and "Back to Me". It's funny, critical, and raises numerous necessary questions. Why do women─even fictional ones─have to be likable? Why must people of color contend with table scraps when it comes to media representation? Why is our society committed to making excuses for sexual violence? Is being a "bad feminist" really such a bad thing?

"Reaching for Catharsis: Getting Fat Right (or Wrong) and Diana Spechler's Skinny" is most relevant to my experience, for obvious reasons. But "The Solace of Preparing Fried Foods and Other Quaint Remembrances from 1960s Mississippi: Thoughts on The Help" is my absolute favorite! Gay takes a book and movie that I (used to) thoroughly enjoy and tears them to shreds, but with a solid argument and valid points. When I started to read the essay I was shocked and confused, then defensive, then I thought twice, and by the end I'd grudgingly changed my mind. I still don't abhor The Help to the degree she does, but she does call BS on a lot of aspects that I hadn't paid attention to before. (The gist: The Help is just one more in a long line of historical films about race in America that's meant to comfort white people more than to adequately address racial issues. It's such an egregious fantasy to Gay that she deems it "science fiction". She also touches on the fatigue and erasure Black people often feel watching films that remind us of our collective trauma and/or are supposed to be about us but aren't genuinely so). So I feel convicted but also am grateful for her bringing me up to speed.

I'd like to think there's an essay in this book for almost anybody; either something you know well from personal experience or a concept that's still fuzzy to you and that you need work on. What I appreciate most about Bad Feminist, however, is that Roxane Gay uses her book not only to sound off but also to inform readers about who she is. She begins and ends the collection by writing about herself, holding herself accountable for what she's written and explaining where she's coming from. In between, to some extent each essay reveals how Gay situates herself as a feminist, as an academic, as a black person, as a child of Haitian immigrants, as a woman, as a writer, as a competitive Scrabble player. She's not some talking head removed from the work that she's created; she's in it and she owns it. And I find that incredibly courteous and helpful!


"It makes perfect sense that many of us obsess over our bodies. There is nothing more inescapable. Our bodies move us through our lives. They bring pleasure and pain. Sometimes our bodies serve us well, and other times our bodies become terribly inconvenient. There are times when our bodies betray us or our bodies are betrayed by others.... Bodily obsession is, perhaps, a human condition because of its inescapability" (113).

"Men refuse to allow their bodies to become a legislative matter because they have that inalienable right. The drug industry has no real motivation to develop a reversible method of male birth control because forcing this burden on women is so damn profitable... There are exceptions, bright shining exceptions, but most men don't seem to want the responsibility for birth control. Why would they? They see what the responsibility continues to cost women, publicly and privately" (276).