As mentioned in my last review, this is the second of two books that I was able to buy for $2.91. Not only that, but it's also a translation of a hugely popular French novel published in 2012, which got me so excited that I barely needed to examine what it was about (as much as I usually do) before buying it. I didn't even know that the lottery was that big of a thing in France, and coincidentally I ended up reading this novel right in the midst of all that hubbub about the $1.6 billion Powerball that was going on a couple weeks ago here in the States. So this ended up being a timely story that did not disappoint! 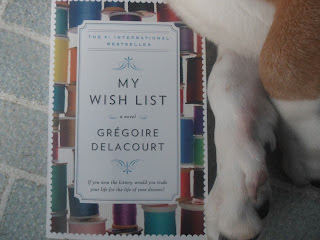 Jocelyne is French woman in her late forties who is bored with her life, having settled after enduring much heartbreak and abandonment. She lost her mom at 17. Her dad began succumbing to dementia when she 18. She married the first man who expressed interest in her, who'd initially only wanted sex but became her husband when their tryst led to pregnancy. She had two children before giving birth to a stillborn child, which she never got to mourn properly because her husband blamed and abused her for the loss. When she was younger, Jocelyne had dreamed of being in deep love with a man who was passionate about her, of being beautiful, of being a fashion designer, of being happy and free. Instead, she's living in the small and slow-going town of Arras, running a fabric shop, working next to a twin pair of frenemy shop-owners, married to a man who only loves her to a certain extent, and the mother of twenty-something children who have long left home and are hardly bothered.

Over time, Jocelyne has learned to be resignedly content. But two events interrupt that contentment. She starts a knitting blog that surprisingly generates a following, and later on she wins the lottery. Jocelyne starts tengoldfingers on a whim, figuring she'll pass the time by taking up something that everyone else seems to be doing these days. Her writings about stitches, techniques, patterns, fabrics, and the items offered in her shop actually amass a sizable readership of women that turns into an unexpected and off-putting community for Jocelyne─a community that looks to her for answers to life questions, but also offers her tremendous support when, say, her husband is ill. The blog might be the first instance in her adulthood where she feels like she means something significant to others. People want to hear her voice and appreciate her for being herself, without her having to convince them to do so.

The second event, which is the major event of the novel, is Jocelyne's lottery win. She follows the advice of her twin shop-owner neighbors and absentmindedly buys a ticket just for the heck of it, and ends up with 18 547 301,28 € (equivalent to $20,084,872.56 as of this post's publishing). After receiving a hefty orientation from the lottery organization's in-house psychologist, Jocelyn decides that she doesn't want anything to change too much. Though her pre-lottery life may not be the life she dreamed of, she appreciates her life because it is hers; it's stable and she's worked hard to maintain it. She may be bored, but she's not completely unhappy. So she doesn't want to sacrifice what she has for money, and is loath to pursue the multiple "wish" and "need" lists that she makes while contemplating her new secret fortune. Unfortunately (or fortunately?), that resolution comes to naught when someone else makes the decision for her.

My Wish List is a fairly quick read; I read it in two days and probably could've read it in one if I was in a hurry. Generally it's relatable to women and moms, or anyone who's wanted more out of life and just hasn't gotten it yet. I mean, who doesn't fantasize about having the means to do whatever they want when they want? Who doesn't yearn for a do-over in life? My Wish List's cover poses this question to all of us, "If you won the lottery, would you trade your life for the life of your dreams?" Take this book as an opportunity to see how you would answer that question.

"Because our needs are our little daily dreams. The little things to be done that project us into tomorrow, the day after tomorrow, the future; trivial things that we plan to buy next week, allowing us to think that next week we'll still be alive... You can spend your life filling a house, and when it's full you break things so that you can replace them and have something to do the next day. You can even go so far as to break up a relationship in order to project yourself into another story, another future, another house. Another life to fill" (111-112).