I'm so happy. Could you tell?

Obviously my being Black is no news to me, but thanks to AncestryDNA I now have some quantitative clues as to where my particular Blackness comes from geographically. I sent for the kit on April 11th, I got the kit, sent it back, and they received my sample on April 22nd, they started lab processing on May 10th, and my results became available this afternoon. That makes 6 weeks from the time I ordered the kit, and out of that time only 2 weeks to get my results (normally they tell you to give it 6-8 weeks from the time the lab receives your sample).

Before I spill the beans, I acknowledge that what AncestryDNA has provided is only an estimate; no such test is 100% accurate and I'll likely never know the complete breakdown of my ethnicity. And of course, being a product of the Trans-Atlantic slave trade with roots in the Deep South on both my mom's side and my dad's side, the results are no colossal surprise.

But it's something. I know something, or at least I've got an idea. And I'm excited! So without further ado, according to AncestryDNA: 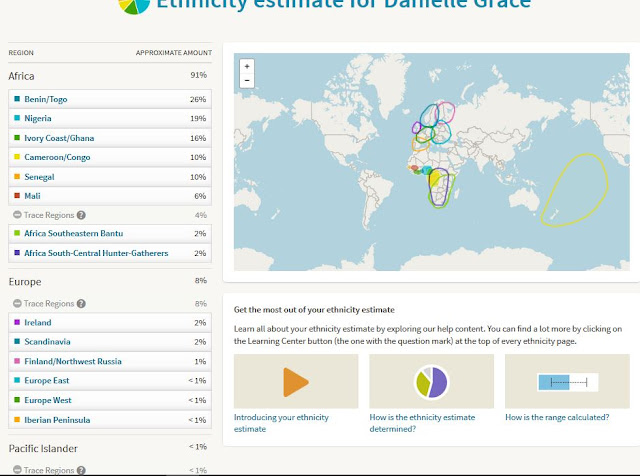 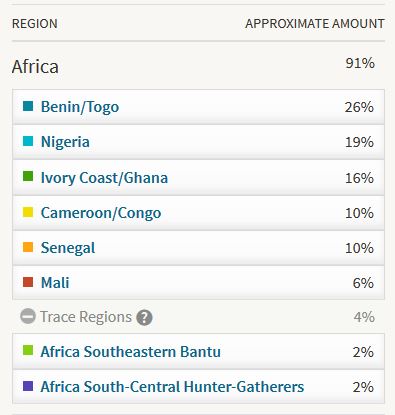 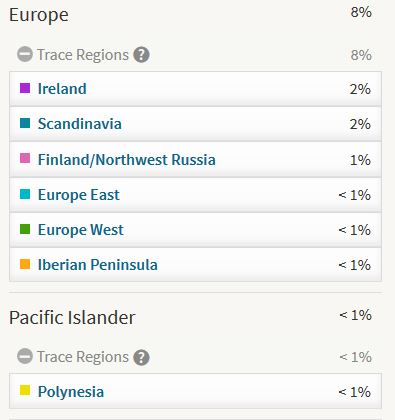 Yes, you read the list right. 2% Scandinavian. You remember that dream I had last month that prompted me to send for the DNA kit in the first place, that dream where I found out I was 50% Scandinavian and was devastated that I wasn't Blackity BlackBlackBlackBlack? Well look what we have here, come full circle. Now mind you, that percentage and the other European and Polynesian percentages listed are trace regions. There's a very small amount of evidence linking me to those places, so they could mean something or nothing at all. (Whoa, does that mean up to 9% of me could be unaccounted for?) Either way, you know what this tells me? That God's got jokes.

Since this is only an estimate and only one test, I could question or even reject the results as I please if I were so inclined. While researching this whole thing, I found that a lot of genealogy buffs poo-pooed AncestryDNA because it wasn't comprehensive enough, saying that the results 23andMe offers at $199 are more thorough and useful. Facebook also caught on to what I was doing and has been bombarding me with ads for AfricanAncestry.com, which offers a composite for $199, or for $299 they claim to trace your paternal or maternal side all the way back to the tribes of your ancestors. But AncestryDNA's the cheapest on the market right now, and I'm not so deep into this thing that I want to obsess over the details just yet. So for the $108.95 total that I spent, I am more than satisfied for the time being. Maybe I'll try a different test next year. Ohmygoodness but y'all I am so happy right now! I'm Black, y'all! Like for real, the Motherland's got me!
Posted by Deela (Danielle G.) at 8:31 PM No comments:

Yo, I know I'm mad late, but have y'all seen 'Good Will Hunting'?

I had to let Madison out to pee so I was randomly up at 7:30 this morning watching it for the first time, and it is so good! That scene where Matt Damon read the NSA for filth is everything!

Oh, there's so much relevant stuff going on here. The trouble of being gifted and not knowing what to do with it/being too stubbornly afraid to do something with it, the simultaneous desperation to feel "real" and yet hide from the world, the question of what measures success or failure, the wonders of therapy when it actually works, recovering from childhood abuse and trauma, the fear of giving people the power and proximity to let you down.

While at work today, I was typing away while listening to a podcast as I regularly do now, and I had a thought. Since I haven't written on here in a while, and I'm currently having an indecisive moment when it comes to books (no reviews coming anytime soon), why not write about the type of art that's engaging me the most right now? Since my last roundup I've latched onto about 13 podcasts that I listen to both actively for entertainment or information and passively for welcome distraction or background noise to help me focus, and I'd like to share them with you. Here they are, in no particular order.

2 Guys and a Girl (Xavier, Jade, and Jay): Three friends in NYC talk about current events, Black music, personal stories, and whatever else comes to mind. Highlights include "Cocktail of the Week", "Say No to Co-Workers", and "Fucked Up Song of the Week".

Bodega Boys (Desus Nice and The Kid Mero): Two comedians and TV personalities from the Bronx shoot the 'ish. Intelligent content with satisfyingly ignint delivery. Highlights include "the art", Desus' Ben Carson impressions, and pretty much everything else.

Black Girls Talking (Fatima, Aurelia, Ramou, and Alesia): Four 20-somethings from different parts of North America come together to talk pop culture, media representation, self-care, variations of Blackness, and other topics that concern them as Black millennial women. Highlights include their "Bonus" episodes, which tend to be more specialized and often include interviews with special guests.

Jinjja Cha (Girl Davis and April): Flaunting a made-up phrase meaning "real tea" in Korean, two Black women from opposite sides of the pond (Girl Davis in London, April in Kansas City) spill all the tea about Korean music and culture, K-pop gossip, and all things related to Korea and the expat life. Highlights include 2-hour episodes (as of late), the listener letter segment "Anonymous", song reviews, and Girl Davis' exquisitely impassioned and informative tangents.

Melanin Millenials (Imrie and Satia): A pair of 20-somethings in London of Jamaican and Guinea Bissauan descent (respectively) discuss current events, politics, identity, and Twitter happenings from a British perspective. Highlights include "Your Comment Should Not Be Free" and "Afrobate".

We Just Got Back/WJGB (Tam, King Cam, and Boj): After having spent time studying/working in the UK and the US in particular, these three friends discuss their lives in Lagos since returning to Nigeria. Think UPN's 'Girlfriends', except more unabashed, with lovely Naija accents, and in podcast form. Highlights include their embarrassing stories, occasionally bizarre sex talk, and insights on dealing with Nigerian men's expectations.

Mostly Lit (Reckless Rai and Alex Reads/AJ): A cousin podcast of Melanin Millenials, Rai and Alex are British book nerds who discuss literature within the context of current culture and society, especially as it pertains to colonialism, trends, and POC experiences. Highlights include Alex's voice,  their  book recommendations, and their most recent Disney episode.

Your Black Friends (Eric Vincent, Martin Weiss, and Camille Johnson): For melanated and non-melanated people with no Black friends, this trio of  Detroit area residents and UofM grads volunteer to explain topics related to Black culture, hip-hop, current events, the Metro Detroit area, and Twitter/Instagram/Snapchat happenings. Highlights include their occasional shouting matches; hard to listen to but it's impressive that they leave them in the finished product anyway.

Sisterly Love (Shaina and Candice): Two sisters from Mississippi chat while offering tidbits of wisdom to get you through the day, flecked with Bible verses and Christ-centered inspirational thinking. Highlights include short episodes (under 30 minutes), and delivering a Word that is easily applicable to everyday life.

My Brother, My Brother and Me/MBMBaM (Justin, Travis and Griffin McElroy): Three brothers take random questions from Yahoo! Answers and their own inbox and answer them as if the askers of those questions are actually listening. A mostly irreverent, mostly phony advice show that has some hilarious moments. Highlights include custom jingles in the "Money Zone", and the last question of every episode, which always goes unanswered.

RISK! (Kevin Allison): Curated and edited recordings from RISK! storytelling events around the country, with the occasional radio-style recording thrown in for good measure. Each episode and event is themed, and featured speakers have the freedom to talk about whatever they want. Lots of honesty, vulgarity, laughs, and occasional crying. Also astonishingly sex, kink, body, and LGBT positive. Can't pick a highlight because all of the episodes are excellent in their own way.

Beautiful Stories From Anonymous People, a.k.a. Beautiful/Anonymous (Chris Gethard): Comedian Chris Gethard allows anyone to call him, talk about whatever they want, and keep up a conversation for up to an hour. The only rules: Chris can't hang up, the caller can't tell him their name, and the phone cuts off exactly at the 1-hour mark. Like RISK! this one's all about connecting with people, but the spontaneity of it and the way that Chris' kindness and humor get people to keep talking make it truly special. Highlights include "The Most Amazing Destruction", which I'm listening to as I write this list.

2 Dope Queens (Phoebe Robinson and Jessica Williams): A hybrid storytelling event and stand-up comedy show in which comedian friends Phoebe and Jessica perform their podcast live in Brooklyn, often joined by their various comedian friends. Highlights include the freedom with which the hosts display their friendship and the candid stories they tell during their opening sets.

All of these podcasts come highly recommended from yours truly. I wouldn't be surprised if my podcast diet expands even more during the remainder of the year, and if so I'll definitely have another list coming up for you. Happy listening!
Posted by Deela (Danielle G.) at 9:28 PM No comments: