BOOKS! (The Stones Cry Out + Who Will Cry for the Little Boy?)

I think I've got something good going with this doubling-up approach to reviews. Perhaps I'll keep this up until year's end and return to longer reviews after the new year (new reading goal, more time, less presure). We'll see. Both of today's books passed through someone else's hands before getting to me; I bought one at a local used book sale, and I borrowed the other from my mom.

The Stones Cry Out by Hikaru Okuizumi 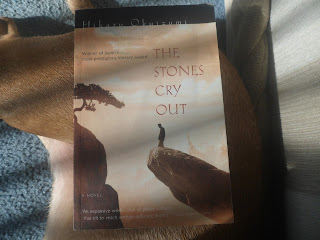 This Akutagawa Prize-winning novel is relatively short and yet manages to breeze through three decades from the ending stages of World War II to the 1960s/70s wave of student activism in Japan. The Stones Cry Out is told from the point of view of Tsuyoshi Manase, a bookshop owner who starts collecting, analyzing, cleaning and categorizing rocks as a hobby following WW2. The man who had inspired this hobby was an ailing lance corporal in Manase's ramshackle unit in the Philippines during the war, whom Manase actually killed as an order from their sword-happy captain to drop dead weight. Said lance corporal's last words were mostly hysterical babbling about rocks, and it is unclear whether Manase is genuinely inspired by this information, or if taking up the hobby is an act of penance that turned into a passion. Either way, Manase's passion for rock collecting earns him considerable renown as an amateur geologist. But as a consequence of this hobby which brings him such a strong sense of importance and fulfillment, his firstborn son dies, his wife has a mental breakdown, his marriage is rendered unsalvageable, and his connection with his younger son is almost nonexistent to the point that Manase is helpless in the wake of said son's violent rebellion as a university student. Rather than rock-collecting itself, however, what's largely at play is Manase's general disengagement from social and familial aspects of life. (We do not learn enough about his pre-war life to know if this has always been his personality or if this internal shutdown is a consequence of him not properly addressing his sordid war memories and stifled guilt.) The Stones Cry Out's title is a reference to Luke 19:40, but also happens to echo Genesis 4:10, in that often sites of violence, bloodshed, or psychological distress maintain a remnant of those events that will always make itself known. And Manase must contend with his memories before his past takes more from him than it already has.

"Manase tried to imagine what it must be like to die together with his commander, to fall under the fire of the recognizable enemy, hearing in his ears the voice that had ordained his death, spurred by the whistling of naked steel. He imagined himself in a field shrouded in a lilac haze, an infinitely tragic figure; the bullets piercing his flesh seemed to give more pleasure than pain. To shed tears because now he was about to die for the Great Cause he had heard so much about, at the same time yearning for a swift death―" (26-27).

Who Will Cry for the Little Boy? by Antwone Fisher 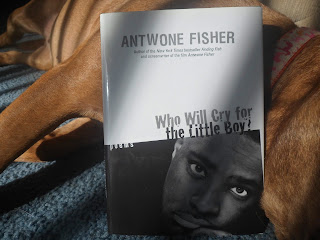 A man with many hats, Antwone Fisher is best known for his autobiography Finding Fish and the film that it inspired, Antwone Fisher, which was helmed by Derek Luke and Denzel Washington. He is also a poet. Fisher writes in the forward of this book of poems that poetry is a cherished pastime of his that has always brought him peace and a sense of security in himself. Most of the collection is comprised of love/relationship poems he wrote in his spare time or per his Navy friends' requests, and... it shows. Perhaps it's just me, but I wasn't really feeling any of them. There were some memorable lines, though! Maybe these poems would be well-suited for a poetry slam or an open mic; they might not do anything for me just reading them off the page, but when read aloud with the right intonation, emotion and rhythm, maybe they could be quite engaging.

"I must have painted you with me, more than one hundred times. I love you more than life itself, on this canvas called my mind" (37).

"Lightning strikes and thunder rolls, my eyes are damp, your heart is cold" (47).