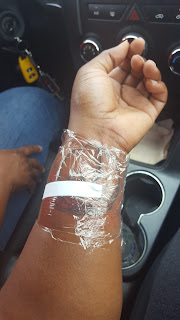 A little over a month ago, literally right before we hit the road for Michigan after our family reunion weekend, on the day that also happened to be my natural hair anniversary... I got my first tattoo.

It's something I'd half-heartedly considered ever since I was old enough to legally get one, but I never had an idea that I'd be willing to commit to for the rest of my life. Until this summer. I was in Louisville for Father's Day weekend and was chatting with my cousin, admiring her tattoos. She said I should get one and I balked at first. Not cool or daring enough for that. But then I changed my mind.


I was just coming off of a major personal disappointment, having accepted that despite my diligent and occasionally frantic efforts, my one big life-changing goal for the year was not going to come to fruition; time had run out. I was feeling more and more despondent about myself (self-loathing is a heckuva drug), my life (not moving forward) and my current job (dead from the moment I started there, nowhere to move in that place but in circles). I was just over everything. I've lost, and if these two post-college years are any indication, I'm liable to keep losing, and if I'm going to lose at life anyway, what does it matter? So I get a tattoo, so what? Might as well. Why the heck not? 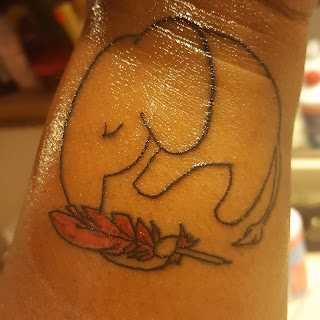 So my cousin and I agreed that when I came back to Louisville three weeks later for the family reunion, we'd get tattooed together. An initiation for me, a seventh (eighth? ninth?) go-round for her, and a bonding experience for us both. She'd arrange everything. In the meantime, I turned to my college friend Irene Li to draw a design for me. I had an idea for the tattoo and knew where I wanted it to be, but didn't have the skills to actually put it together. Irene's in the Bay and I'm in Michigan, so we went back and forth for a week through FB messenger, going over ideas and reviewing sketches that she came up with. And in the end she came up with something perfect! 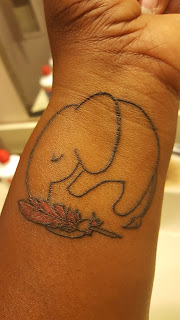 Cut to Monday morning after family reunion weekend when my cousin, my mom, and I went to Committed Ink Studios to do the deed. My cousin had already decided not to get another tattoo after all, but I was so committed (teehee, puns) to the design now that I was determined to go through with it. Lou, the owner of the shop, was focused, quick, and extremely affordable. A talented man and a true artist! Ma and my cousin watched. It hurt, my palms got sweaty, but I only winced inwardly and I didn't cry. And again, the result was perfect! 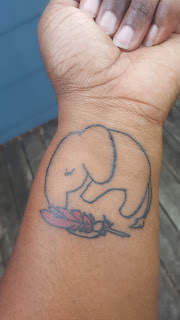 I'd done something that I couldn't take back, and I hit the road for home feeling more grateful and satisfied than I had in a long time. Even now I still stare at my arm in wonder multiple times a day. At first I was awed by the fact that this part of my skin is forever changed, like Wow, did I really do this? But after that wore off, a different feeling began to surface. Pride. I'm proud of my tattoo. Nearly my whole life I've gotten through the day by dissociating myself from my body as much as possible. This isn't the real me. This is how my body happens to look now, but once I finally manage to look different, then I'll really be my true self. The self I was meant to be all along. I've realized that getting this tattoo was an act of acknowledging and claiming ownership of my body in a way that I've never done before. This isn't a provisional me. I am what I am at this moment. And this image carved into my skin is forever. (Shoutout to my friend Dany at The Dear Body Project for inspiring me to reflect on myself this way). To be honest, the enthusiasm doesn't really extend past my left wrist, but it's a start. And now I have a personal, custom-designed, permanent reminder.

Oh, and what does the tattoo mean, you ask? Well. I've loved elephants since I was little. It's holding a quill, which is a reminder to me to keep creating things, even if I don't have the courage to share my stuff. The feather is red to represent the city of Louisville where my mom and her family are from. Coincidentally (totally unplanned!) the shape and lines are reminiscent of Rafiki's painting of baby Simba, and The Lion King is my favorite movie of all time.