Spent 13 hours doing my hair last night and didn't finish until 8:30am this morning, slept most of the day (fatigue and dehydration, lawdhammercy!), and didn't have special plans for today anyway, so I'm spending what's left of Halloween at home writing this review. I started both of these shorter books early in the year, but for some reason didn't finish either of them until last month. Let's get to it! 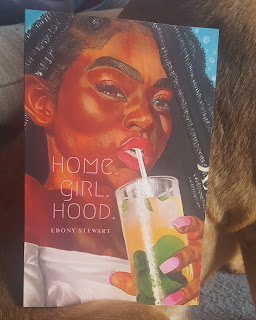 I know I've mentioned this before, but I've been a fan of Ebony Stewart ever since I witnessed her perform at the MSU Union back when I was a college student. Ebony is a spoken word poet and former sex ed teacher (she's a full-time artist now!). I bought her previous book of poetry Love Letters to Balled Fists  three years ago, and when I found out she'd be releasing a new book this year and that the painting of the fly girl rocking faux locs and a drink in her hand would be a limited edition cover, I didn't even have to think about ordering my copy right away.

Much like Love Letters to Balled Fists, Home. Girl. Hood. features poems about love and heartbreak, which are familiar themes in Ebony's work. But it also addresses Ebony's southern roots, the women and ancestors who made her who she is, the marvels and trials of being a Black woman (or "womyn"/"womxn") in America, Ebony's autonomy as a sexual being, bucking prescribed norms and expectations, and the duality of women's bodies being both sacred entities and sites of trauma. There's also some commentary about how white people appropriate our ish while also contrasting themselves from us in order to define themselves as "white", and how even the natural hair movement hasn't escaped being influenced by aspirations toward whiteness/lightness.

My favorites this time around include: "Hairitage" where hair-braiding is a form of communication, with mothers and grandmothers transferring information to us black girls with their hands. "How to Properly Flirt with Someone You're Attracted to and Want to Be Your Boo", which includes some strikingly brilliant, silly, and even gross declarations of love. "Happy Father's Day: the child gets it wrong", where Ebony expresses all the bitter hurt and biting sarcasm toward her inactive father that I wish I had the audacity to express toward mine. "Perhaps we should go back" which lists all the things we'd be taking with us (and the pitifully little that would be left behind) if all Black people in America decided to return to Africa. And "I Love Mondays", which cleverly explores people's hate for Mondays and then connects that to how it feels to be an outcast, underappreciated person in this world.

If you love your mom, care about what Black women have to say, and support women artists who are multifaceted and aren't ashamed of where they come from, then read this book!


"weaving... mistakes, to
remind me that there will always be a hair out of place and there
will never be enough time to fix it, so tread lightly, braid carefully.

[...] She says, when your
hair's a mess they think your life is too. And I shouldn't give them the
satisfaction of knowing my business better than me." (from "Hairitage", p. 6)

"Crumble under pressure, only slapbox those they know they can beat
by bringing a knife or a gun to a fight that only requires the use of hands.
Name a coward that didn't break the rules, make a fist, a bomb, a "law",
and hit a nigga hard enough for the ground to open up and fit a
whole body in. Or at the very least, didn't send the police mob
to our neighborhoods with maximum power and chains.


A Greater Music by Bae Suah
(Translated by Deborah Smith) 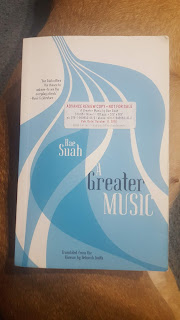 I heard about this book from Julia Megumi, a writer and academic who's my favorite book blogger on Instagram, recommending mostly Japanese, Korean, and Asian-American literature. She also has a pretty cool website with long form pieces as well. I can't remember why I decided to order this novel other than because of its unique combination of character, setting, and subject matter (young Korean woman living in Germany, musing about music). Ordered my copy from ThriftBooks and what arrived was an advanced review copy from 2016 with perfumed pages. I was delighted!

A Greater Music is narrated by a Korean writer staying in Germany. Her name is never given. Within the first 15 pages we learn of an incident where the main character was walking her friend's dog and somehow slipped and fell into a frozen pond.  We know that she survives (the book is framed as a sort of memoir, written by the main character after she has already returned to South Korea), but never find out how. Anyway, this passage is significant because as she thinks she's dying, we're introduced to the narrator's way of thinking about death, denial, humiliation, and her German-tutor-turned-lover, M. Through the narrator's voice, Bae Suah writes that time and memories are not linear, so it makes sense that the events of the book aren't relayed in a linear fashion. The retelling of a past event is interrupted by the recollection of an event that took place even further in the past, before returning to where the initial retelling left off. A memory triggers other memories, which invoke ideas and sensations, which transition to other seemingly (but only seemingly) unrelated memories. I'll do my best to recap the bare bones of  the novel's chronology.

The narrator originally comes to Berlin to study, and during that time she becomes friends with a fellow university student named Joachim. Joachim introduces her to M, a sickly but independent woman who serves as her German teacher for a time before she and M become romantically involved. M is also the one who helps the narrator learn about and appreciate classical music.  For some reason (not going to spoil it for you), the narrator and M lose contact and the narrator has to return to South Korea once her visa's expired. She then returns three years later during the Christmas holiday and stays with Joachim during that time, reading, wandering around Berlin, walking Joachim's dog, and thinking and dreaming a lot about M but not making an effort to get back in contact with her. Essentially, being severed from M has been such a devastating loss that the narrator isn't able to think about anything the same way again, or approach anything akin to a stable sense of happiness. (I promise it's not as depressing as I'm making it sound!)

If you don't like listening to people discuss music history, literature, love, or human behavior just for discussion's sake, then this book might seem dry. Aside from the plot of the story and the narrator's feelings about M, much of the book is just the main character thinking really deeply and abstractly about those other topics. Luckily that sort of thing is right up my alley, so such passages read more like the book was meandering with a purpose. If you're seeking closure for a certain relationship, are interested in reading about Korean expats, enjoy classical music, or are just in the mood to read something set in Germany, then read this book!


"Music transcends its so-called 'creator,' rising above whatever motivation—whether individual fame, avarice, or even pure egoism—lay behind its so-called 'creation.' Music is itself that spirit of artistic creation that can't be compassed by the human, which simply chooses the body of an individual as its temporary vessel... dedicating their 'own' music to a given individual would be beyond the power of the composer" (102-103).

"M wasn't someone whose entire being could be summed up in a snappy slogan or TV debate. Rather, she was like a book without any pictures. In other words, the kind of person who, unless you brought your whole soul to bear in reading them, would remain forever unknowable" (116).