I had every intention of writing two book reviews in May, but I guess that goal will just have to be shuffled to June. No worries. At least I've kept up with writing a review every month so far in 2019. Well, except for January, but you know... January is a transitional grace period, a practice month until the year starts for real in February. So as far as I'm concerned, I'm still on track. Anywho. Today, I've got a memoir that one of my podcast guests wrote (check out her appearance on Young, Gifted and Abroad episode 34: "Kinky Gazpacho, Melting Pot"), and a novel that I found at Target along with Where'd You Go, Bernadette. 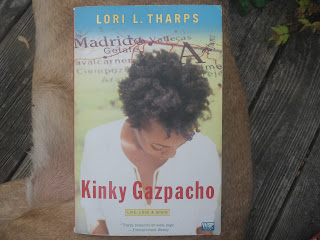 As detailed as this memoir is, it's also very succinct. Each chapter neatly contains a significant phase or event, the book's written in an honest and down-to-earth tone, and it's a relatively quick read if you want it to be. I felt like I got a decently thorough grasp of who Lori is as a person in just 207 pages. Granted, I probably had an advantage in that Lori's student years were so similar to mine. She grew up as a middle class Black girl in the Midwest (check). She became enamored with languages and latched onto Spanish when she was younger (for me it was French, plus Japanese later on). She was passionate about gaining cultural and linguistic fluency in all things Spanish, and dreamed that moving to Spain would transform her into her fullest and freest self, in the tradition of Josephine Baker (I can't lie, the expat and/or location-independent life is still my dream). She grew up being told that she "talked white" by other kids and tried but failed to develop a sisterhood of close Black friends in college (my sisterhood unfortunately fizzled out post-graduation). And she finally got to be immersed in her target country once she got to college (check).

As Lori admits, time and more nuanced exposure to Spanish culture actually made her fall out of love with Spain. It will always be a part of her life, since her husband is Spanish, her in-laws are Spanish, and her kids are half Spanish. However, due to the anti-Black racism she's experienced there and the widely-held limited concept of who counts as "Spanish" and who doesn't, Lori no longer romanticizes the country like she used to. Sensing there was more beneath the surface, for a magazine story she spent a few weeks researching any possible evidence of Black people being part of Spain's history, and she made some amazing discoveries (namely that Black people were enslaved in Spain too, not just in overseas colonies, and a few churches have statues of Black saints and even a Black Jesus).  Learning this part of history that most Spanish people are unaware of helped her make peace with her disappointment; she could see herself there even when others did not. If you're interested in memoirs, travel, love stories, coming-of-age stories about Black girls that aren't tragedy porn, learning another language, or what in the world "kinky gazpacho" means, then read this book! 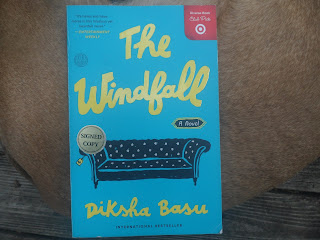 As I mentioned when writing about Where'd You Go, Bernadette, I was in a book-buying mood at Target and was looking for something light and funny but also slightly cerebral, and The Windfall was another one of my selections that day. I'd actually never heard of this novel before. But I saw that it was a book about an Indian family in Delhi written by an Indian American woman, that it had two references to Crazy Rich Asians on the back cover (including a blurb of approval from CRA author Kevin Kwan), and that all the Target copies were signed by Diksha Basu herself. So I bought it.


Starting in East Delhi in the 1990s, the novel opens with the Jha family preparing to move from the cramped apartment complex they've lived in for 30 years, to an area of town cultivated exclusively for the super-rich. Anil Jha (Mr. Jha) has recently earned 20 million USD from the sale of a website he developed, so he and his wife Bindu (Mrs. Jha) are moving on up... away from the eastside. Their son Rupak, who wants to be a filmmaker but is pursuing an MBA in America because he thinks it will please his parents, also reaps the benefits of his father's luck by making expensive purchases and not worrying about paying for school. Meanwhile, Mrs. Jha is weary of what it means to be "starting over" at her age. She confides in her supportive neighbor and friend Reema (Mrs. Ray), a relatively young 42-year-old widow whose new lease on life feels muted because she can't afford to escape her nosy and judgemental neighbors like the Jhas can. The novel follows the Jhas' transition out of the middle class as they finally move into their new home and adjust to their new neighborhood.

I particularly enjoyed Reema as a character, because as a perceived transgressor who has opted not to devote the rest of her life to mourning her late husband, she questions the labels and expectations projected upon women more than anyone else does. Her hesitant but earnest determination to live for herself is incredibly endearing. Conversely, much of the book focuses on Mr. Jha's nouveau riche mentality and behavior, and I just didn't find him all that interesting. Once he and his wife relocate, Mr. Jha and his new neighbor Mr. Chopra become obsessed with one-upping each other, displaying their insecurities in the process. But during every passage I read with them in it, I was always wondering when the novel would switch focus back to the other characters. I also couldn't help but notice that Mr. Jha and Rupak idealize white women in an unnerving way. Rupak has a secret white girlfriend whom he loves more for what she represents than for who she is as a person. Meanwhile, unaware of Rupak's boo, Mr. Jha fantasizes about having a white American daughter-in-law to show off to his new neighbors like a trophy that screams, "I'm richer than you!" I got the feeling that this is meant to comment on how some Indian people overvalue whiteness, but I would have liked the novel to dig deeper into this. Like if the women in their lives had thoroughly called them out on their Becky fixations, that would have been incredibly satisfying.