I spent much of last weekend feeling lonely and reading poetry; I can't remember which precipitated the other.

On Saturday night I took a break to scroll through Twitter and saw that one of the writers I follow had retweeted info about something called Pen Pal Palooza. Another writer named Rachel Syme organized this pen pal exchange, where anyone in the world can sign up and be randomly matched with two pen pals at once. One pen pal gets your info so that they can write you first, and unless they message you directly then I guess you don't know who or where they are until you receive their letter in the mail. For the second pen pal, you get their info so you can write them first. And because I was already up late, feeling lonely, and the fierceness of my introversion had been compromised by fatigue, I took a chance and signed up for #penpalooza too. 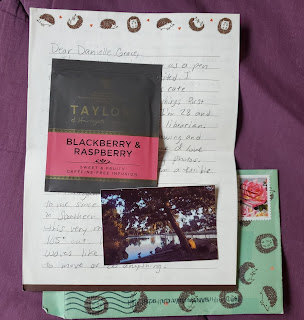 The next day, Sunday, I got an email notifying me that I'd been matched with a woman in London! I wrote her a letter and sent it on Tuesday. Cut to today, Friday, and I've just received my first letter from my other pen pal! On hedgehog stationery! From a California librarian who's only a year older than me, likes to bake, asked me for podcast recommendations, and enclosed a tea packet and a nature photo that she took herself. This is someone I was randomly matched with, but we have so much in common already! Also, how kind and thoughtful is it that she sent me actual stuff? The letter would've been plenty on its own!

I know I don't tend to write life/personal/online diary posts on this blog anymore, and that was a conscious decision. But I was really excited to receive mail from one of my new pen pals today, and so I wanted to post something about it here. This is my first time being pen pals with a stranger, and also my first time doing this as a so-called "adult".

(P.S. - Rachel is keeping Pen Pal Palooza open for the rest of the year. So if you're reading this and it's still 2020, then sign yourself up so you can start exchanging letters with new friends! Links above.)