I made my first book purchases of 2021 earlier this month (stepped foot inside a B&N and everything), and fittingly, those purchases are the focus of this review! In addition to being two of the first three new books I bought this year, today's selections were both translated into English from other languages and published in 2020, and they're also books which I wasn't altogether blown away by but still appreciate for existing. First up is an international bestselling novel about a South Korean woman's debilitating lifelong experiences with sexism and misogyny. Then, a winding novel about an Angolan-Portuguese woman in Lisbon grappling with her curly hair and family history. And coincidentally, both of the protagonists of these novels were born in the year 1982!
Kim Jiyoung, Born 1982 by Cho Nam-joo
(Translated from Korean by Jamie Chang) 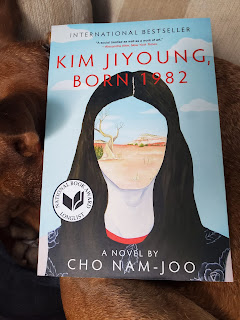 "Besides, I don't know if I'm going to get married, or if I'm going to have children. Or maybe I'll die before I get to do any of that. Why do I have to deny myself something I want right now to prepare for a future that may or may not come?" (60).
"Disappointment collected between them like dust on top of the refrigerator or medicine cabinet—spots clearly visible but neglected... Onto the feelings left unsaid for so long that they were desiccated and crackling, a tiny spark of a flame fell and instantly reduced the most shining romance of youth to ashes" (107-8).
"The world had changed a great deal, but the little rules, contracts, and customs had not, which meant the world hadn't actually changed at all" (119).
"Help out? What is it with you and 'helping out'? You're going to 'help out' with chores. 'Help out' with raising our baby. 'Help out' with finding me a new job. Isn't this your house, too? Your home? Your child? And if I work, don't you spend my pay, too? Why do you keep saying 'help out' like you're volunteering to pitch in on someone else's work?" (131).

That Hair by Djaimilia Pereira de Almeida
(translated from Portuguese by Eric M. B. Becker) 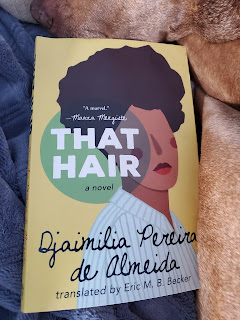 Same with Kim Jiyoung, Born 1982, I have no recollection of how or when I first heard about this book. I just know that I decided to buy it at some point—probably because I wanted to learn about Angola and Portugal from the perspective of the Black woman who wrote it, plus the only other novel I've read about Portugal is Alentejo Blue—and it was on my book list for many months. Fun fact: This is the first book I've ever read whose translator I've actually met! When I was in the running for an editorial fellowship with an international literary magazine last year, Eric M. B. Becker was one of the people who interviewed me. That interaction had absolutely no influence on my desire to read this novel, since I knew about That Hair before I knew that Becker existed, but it's a funny little coincidence that I was looking forward to sharing in this review.
Situated on the west coast of south-central Africa, what's known today as Angola was colonized by Portugal for 400 years until independence in 1975, and the impact of colonization is embedded in main character Mila's family history and physical features. Her most visible and commented-on feature being her naturally curly hair, which sticks out and up rather than flowing downward. She's a biracial woman with an Angolan (Black) mom and a Portuguese (white) dad, who was born in Luanda (the capital of Angola) and then raised in Lisbon (the capital of Portugal) from the age of three. Colonial relations are what makes it conceivable that both of her parents are "from" Africa: her dad was born in Mozambique when that was also still a Portuguese colony, was raised by Portuguese parents who considered Africa to be their home, and he met Mila's mom after moving to Luanda as a young adult. Mila moves to Portugal with her dad in 1985, and by the mid-1990s most of her family on both sides—including her Angolan grandparents but not including her mother—are living in or around Lisbon. Mila mostly grows up with her Portuguese relatives, though she has a tender fondness for both sides, especially all four of her grandparents. She sees her mom during summers when either she visits Angola or her mom visits her in Portugal. (No mention is made regarding the circumstances of her parents' divorce or her mom's decision to remain in Angola.) In this novel that's framed as Mila's attempt at autobiography, her yearning to know more about her Angolan roots and her desire to make sense of her hair journey feed into each other.
It's not that I wanted this to be exactly like, for example, 'Nappily Ever After' (of which I've only seen the Netflix movie adaptation and haven't read the book it's based on). But I suppose I was expecting That Hair to be its own version of that now-quintessential, heartfelt, even humorous story of a Black woman learning to embrace herself through her hair, albeit written in a more sophisticated way and in a Portuguese context. And while Mila does pepper in anecdotes about unsuccessful at-home and in-salon attempts to style her hair, the comments she fields from relatives and strangers alike, and how frustrations with her tresses affect her sense of self... this book doesn't actually center around Mila's hair. It's more about her family and how she memorializes the people in her life (including her ancestors and herself), with frequent mention of her hair as a guiding motif. Reading That Hair actually reminded me a lot of Michael Ondaatje's fictionalized memoir Running in the Family, which also features multiple generations of a mixed family connected to a formerly-colonized country of Brown people (Sri Lanka).
I'll just make it plain and say that I wanted to enjoy this book more than I did. Something about the writing took me out of it. Though I do appreciate that Becker's translator's note at the beginning provides a heads-up about this, explaining how Portuguese writing "is many times more permissive of and malleable to discursive detours, repeated pivots, and elliptical flights of lyrical fancy, all in the same phrase" (xiii). Knowing what to expect did make the book smoother to get through. And while I was impressed by much of the novel's poetic phrasing, I'd venture to say that That Hair probably wouldn't be a good choice for someone who gets lost when reading heavily-descriptive or winding sentences. It feels like something I would've been assigned to read in one of my James Madison College classes back at MSU, classes in which I still distinctly remember tackling community and identity-related questions like: What is a symbol, what is a sign, and what is the real? What is memory and what is forgetting? What is history, what isn't history but functions as history, and what's the difference? What does everything mean? If you enjoy reading philosophical, theoretical, or even slightly abstract thought processes like these, then you'll probably appreciate this book. Or maybe if you're someone who is fond of and has a solid grasp of comprehending poetry (even though the book is written in prose). But if none of that applies to you, the reflective passages that are interspersed with the more relatable quotidian snapshots within the book might read as slightly dry or confusing.
Personally, past a certain point I felt like I was reading this book primarily because I'd assigned myself to read it. And as insightful as it is about the cultures and geopolitics between Angola and Portugal, I finished it mostly because I'd already committed to the idea of finishing it (and I had a review to write!), not necessarily because I was enthralled by it. In a nutshell, I really wanted to connect with That Hair on an emotional level, but I couldn't. And that's okay. I'm still glad that Djaimilia Pereira de Almeida has gotten some shine for writing it.
Favorite quotes:

"They were part of her, like an elastic band around her wrist meant to remind her of something she'd unwittingly thrown away before its time, forgetting what had brought her there in the first place" (29).
"She never got caught up in the mechanics of prayer, the way those who don't know how to pray do. Prayer was, above all, fertile terrain for improvisation, where she didn't trouble herself with vain questions of whether we have a duty to restrain ourselves when we ask something of God" (74).
"Visiting salons has been a way of visiting different countries and learning to distinguish the features and manners of each, giving new fuel to prejudices. Senegal is a pair of moisturized hands; Angola a certain casualness, a brutal grace; Zaire a disaster; Portugal a burn from a hair dryer, the flesh wound left by a brush. I remember Tina, from Guinea-Conakry, a girl who did my hair in Mercês and shared a similar distrust of the Portuguese; but I can color in this map with the angel from another day, Lena, the Angolan girl who saved me one afternoon" (114).
"What is found reconfigures what was sought... A person finds herself only by chance" (133).