BOOKS! (Love in the Time of Cholera)

August 2018 to June 2022. It took me nearly four years to finish this book (after re-starting it from the beginning last summer), which is why I'm writing about it on its own. May and June have been bananas as I wrapped up my podcast for the year (100 episodes! 4 years! go me!), but now I can finally write a new book review. I was in Indiana for my cousin's high school graduation festivities when I finished this book, so instead of my pibble Julia, I used my cousin's goldendoodle Cooper as the book model this time.
I initially started Love in the Time of Cholera when I went to the Bay Area to visit my friend Irene in August 2018, remembering how she'd told me beforehand that some book club within her campus neighborhood at Stanford would be discussing it. (I ended up flying back home before I could attend the book club meeting.) I can't remember exactly when this novel came into my possession; presumably I bought a copy in 2015 when I worked at a bookstore and then let it sit for a while. But I do remember that I bought it because it's considered a literary "classic", and because I'd greatly enjoyed One Hundred Years of Solitude (Nobel Prize-winning Colombian author Gabriel García Márquez's hit from 1967). So I was expecting to enjoy Love in the Time of Cholera (his hit from 1985) to at least a similar extent, and I gotta say... I don't understand the hype. I don't regret taking the time to finish it, and I'm glad to know how the novel ends for myself. But as the grand love story it's been made out to be, I wasn't really feeling it. More on that in a bit.
Love in the Time of Cholera by Gabriel García Márquez 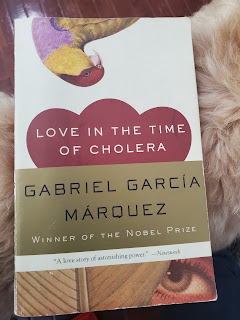 "Fermina Daza did not look at him, she did not interrupt her embroidering, but her decision opened the door a crack, wide enough for the entire world to pass through" (60).
"In this way he learned that she did not want to marry him, but did feel joined to his life because of her immense gratitude to him for having corrupted her. She often said to him:
'I adore you because you made me a whore.'
[...] He had taught her that nothing one does in bed is immoral if it helps to perpetuate love" (151).
"Without intending to, without even knowing it, he demonstrated with his life that his father had been right when he repeated until his dying day that there was no one with more common sense, no stonecutter more obstinate, no manager more lucid or dangerous, than a poet" (168).
"It is better to arrive in time than to be invited" (254).
"With her Florentino Ariza learned what he had already experienced many times without realizing it: that one can be in love with several people at the same time, feel the same sorrow with each, and not betray any of them... 'My heart has more rooms than a whorehouse'" (270).