Best: What the show lacks in fast pacing, it makes up for in vulnerability and emotional maturity, especially from episode 5 onward! My goodness! So many conversations, with such carefully-written dialogue, addressing such difficult and sensitive subjects, with the characters displaying emotional maturity that I only wish more people had in real life. The two instances that stand out to me most are when Satsuki's mom meets Shinji for the first time (while visiting her ex-husband in the hospital) in episode 5, and the highly-charged confrontation that Satsuki, Riku, and Yuuma have together in episode 8 when Satsuki insists they all get their intentions out in the open. I don't want to spoil the details of those conversations since they're among the choicest moments of the entire series. But I will say that in both scenes, the woman expresses her pain and frustration without being homophobic, and the men express their sincere desire to cause no further harm without apologizing for loving who they love. Given the circumstances it feels like a fine line to tread, but 'Prism' pulls it off in spades.
Alright, so the quartet of summer dramas I watched this time around were pretty aight across the board; lots of intentionality, but nothing altogether earth-shattering. With that said, my favorite of the four is 'One Night Morning'. It's creative, it's short, it's vivid, it's romantic, it's empathetic, it's full of food, and I still can't stop thinking about the purple episode (episode 7) because it's just that good. Now that I'm all caught up, I'm curious to see what the fall 2022 J-dramas have in store. Best believe I'll be back to tell y'all all about it!
Posted by Deela (Danielle G.) at 11:52 PM No comments:

Listen. When I said in my last review that I'm locked in to this trilogy now? I meant it! I am LOCKED IN! It took me nine months to realize what a feat of brilliance I had on my hands with The Fifth Season (book 1 of N.K. Jemisin's Broken Earth trilogy) enough to finish it, and only three weeks to finish its sequel, The Obelisk Gate, which I'm writing about today.
Before I dig into my spoilerific review—like I said last time, I'm explaining this series to y'all as I'm explaining it to myself, and this review will be as long as it wants to be—I must give another shout-out to my marvelous friend Sho, who bought me the Broken Earth box set in the first place. After I messaged them about finishing The Fifth Season, they sent me some fascinating articles about Jemisin's writing process (including why she chose second-person narration, how she approached creating races in this universe, and why she chose to "trick" readers into accepting Essun by presenting her as three different people). I am SHOCKED that Jemisin thought readers would hate Essun for being unlikable. Unlikable why? Because she's 40-something, a woman of color, a mom, has killed many, and is hard with people? Psshh! I've loved Essun in all her iterations so far, I refuse to be deterred by her supposedly-sordid details, and I refuse to judge any of her choices, especially when I can see through her hardness to grasp how loving and sensitive she truly is. That's my traumatized, cynical, messed up on the inside, don't trust nobody, prone to shame spirals, Black woman kindred spirit right there. And I'mma stick beside her!
The Obelisk Gate by N.K. Jemisin 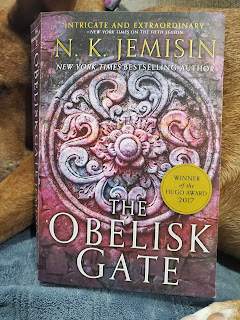 "I'd been looking at diagrams of the obelisks, trying to understand what their builders intended. My head hurt. I knew you were alive, and I missed you so much I was sick with it. I had this sudden, wild, half-rusted thought: Maybe, through the hole, I could get back to you" (168).
"It takes all of herself, and the confidence that comes of delight, to engage with the earth to her fullest" (188).
"You'd almost forgotten this part of him: the dreamer, the rebel, always reconsidering the way things have always been because maybe they should never have been that way in the first place. He's right, too... There's a reason Alabaster was the magnetic core of your little family, back when you were together.
Damn, you're nostalgic today. It prompts you to say, 'I think you're not just a ten-ringer... You're always thinking. You're a genius, too—it's just that your genius is in a subject area that no one respects'" (204).
"No vote... Leave. Go join Rennanis if they'll have you. But if you stay, no part of this comm gets to decide that any other part of this comm is expendable. No voting on who gets to be people" (334-35).
"I wish you could love me anyway, even though I'm bad... I tried to keep loving you, but it was too hard" (387).