The sun shone beautifully today, Easter is upon us, overall spring has been off to a pretty calm and gentle start. So before I start looking for dramas to watch during this spring season, I wanted to sum up the dramas that provided me welcome distractions during the winter. This time around I watched 'Wakamonotachi' and 'Dr. Rintaro' with English subs. Since I watched 'Naomi to Kanako' as it aired in Japan, I caught it with Japanese subs. 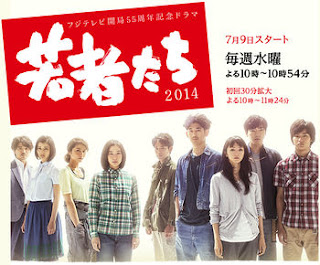 Much like 'Shinya Shokudo', 'Wakamonotachi' has a very folksy and infectious theme song that evokes nostalgia, wandering, and feelings of home. Each episode of 'Wakamonotachi' starts with a lengthy montage of Tokyo life set to said theme song, which is Moriyama Naotaro's "Wakamonotachi". The titular young people are a family of five siblings who grew up and still live together in the same house in Shitamachi, Tokyo. Asahi, the workhorse and eldest brother, dropped out of high school to raise his siblings when their parents passed away. He tries to play both brother and father to his siblings, which not only stresses him out but also causes contention between them. Satoru, the second oldest brother (played by Eita from 'Saikou no Rikon'), re-enters the family after having spent some years in jail. Hikari (played by Mitsushima Hikari from 'Woman'), is the only sister in the family and the only person so far to successfully go to college and start a professional career. She's passionate about her work as a NICU nurse, but is suspiciously involved with her supervisor. Haru, the second youngest, runs a young adult theatre troupe whose actors don't always appreciate his style of leadership. And baby brother Tadashi is a somewhat aimless high school student.
'Wakamonotachi' isn't a topical drama per se, but through examining out how these siblings survive as a family while contending with each other's personalities, dreams, and secrets, the show manages to touch on various current issues. These include unemployment, shotgun weddings, affairs, abortion, raising special needs children, stealing from the elderly, having a convicted felon in the family, and revenge porn. But no matter what they face or how much they want to strangle each other sometimes, what remains is that the Sato family loves hard. This drama teaches viewers that when you're struggling, or if you've really messed up, don't try to handle it alone. Family is there to call you out on BS and straighten you out, but they're also there to cry with you and help you persevere through trying times. They help bear your burdens, and not letting them stand by your side and share your pain is like spitting in their faces. 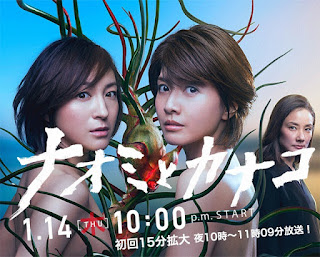 Naomi (Hirosue Ryoko from 'STARMAN') is a luxury brand salesperson and Kanako is a housewife. They've been best friends since college, and one day Naomi discovers that Kanako's husband Tatsuro has been beating her up. However, Kanako's reluctant to report him, so Naomi comes up with the idea to kill him so that Kanako can be free. No, this is not a joke and yes, they do go through with this plan. Through her job, Naomi becomes acquainted with a Chinese undocumented immigrant named Li who's the spitting image of Kanako's husband, and so they do a switcheroo. They dress him up, teach him how to sign his name like Tatsuro, give him a copy of Tatsuro's passport, and have him take tons of money out of the bank to make it look like Tatsuro had been embezzling funds from his workplace before escaping to China. Once Li is off to his homeland, Naomi and Kanako strangle Tatsuro to death and bury his body in the boonies. Though the police let the case sit idle, Tatsuro's older sister and Naomi's work superior Yoko (Yoshida Yo from 'Koinaka'), is relentless once she realizes that something's not quite right about her brother's disappearance or Naomi and Kanako's behavior.

And who could blame her? The duo makes it so annoyingly easy for Yoko to be suspicious of them, because they repeatedly make rookie mistakes! Like happily going on a trip together right after being questioned by the police and Tatsuro's workplace, instead of laying low. Or like forgetting that security cameras exist and not trying to avoid them or get possession of the footage after having done the deed. Murder and clumsiness aside, this show hammers at the value of self-sacrifice and loyalty in friendships. Naomi and Kanako might not be skilled assassins but they are women who support each other, ride-or-die besties no matter how mired the mess gets. This show also emphasizes how important it is for people to get out of situations that hinder their well-being. Such is the content of the theme song "No More" by EXILE ATSUSHI + AI, which is JAMMIN'! Originally Hirosue Ryoko and the premise of 'Naomi to Kanako' are what hooked me, but a couple plot devices felt really cheap, and I'm still not sure how I feel about the phony Chinese accents (Chinese characters played by Japanese actors). I'd say watch it just to hear "No More" over and over again and to see how the scenario plays out. 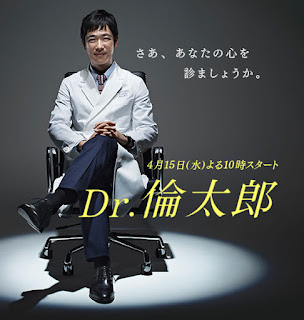 I actually finished 'Wakamonotachi' before 'Naomi to Kanako' had finished airing, so I picked up another older drama to fill in the gap. As a psychiatrist, Dr. Hino Rintaro's (Sakai Masato from 'Legal High') mission is to help the figurative lost sheep of this world find their way. He's sincere and sometimes uses unpopular methods, which is why most of his male colleagues don't care for him and why he hasn't been promoted despite a stellar performance record, published books, and TV persona as a trustworthy and friendly mental health professional. The show mentions various disorders caused by prevalent triggers in Japanese society and modern life, but again I wouldn't call it a topical drama. Workplace bullying, stress-induced sleepwalking, grief, gambling addiction, communicating with savants/children on the autism spectrum, and eating disorders among men are all vehicles used to display the progress of patients rather than to take stock of society as a whole. The standout patient is Aizawa Akira (Yuu Aoi), a woman with dissociative identity disorder who works nights as a geisha hustling guests out of their money. Her mom extorts her to pay her own gambling debts, and Akira obliges in hopes of finally earning her mom's love. Dr. Rintaro also has mommy issues, and no love life. That is, until he meets Akira. Maybe.

I must say that after watching him go from an obnoxiously petty but brilliant lawyer in 'Legal High', to a brilliantly compassionate psychiatrist in 'Dr. Rintaro', I am all the more impressed by Sakai Masato's skill as an actor. And at least one factor in the original broadcast's rating success is clear to me, because EVERYBODY'S in this drama. Granted, some of the dramas I'm about to list aired after 'Dr. Rinaro', but still.You've got Yuu Aoi from Hula Girls and 'Wakamonotachi'. Kichise Michiko from 'Hirugao' and 'Otona Joshi'. Uchida Yuki from 'Naomi to Kanako'. Takashashi Rin from '5-ji kara 9-ji made'. Takahata Atsuko from 'Naomi to Kanako'. Yo Kimiko from 'FIRST CLASS 2' and 'Wakamonotachi'. Kenichi Endo from 'Kekkonshiki no Zenjitsu ni'. Chances are, if you've been watching J-drama for a while, you'll recognize a few faces.

This round's best pick is a tie between 'Wakamonotachi' and 'Dr. Rintaro'. The former was intriguing to me as a family-oriented only child, and the latter added to the little that I understand about mental health in Japan. However, as usual I would recommend all three. Until next time!
Posted by Deela (Danielle G.) at 8:01 PM