Now that I've FINALLY finished 'Starman', I'll share my favorite from the last round before moving on to the current one. (I know, it's almost winter and I'm still evaluating dramas that I watched during the summer, but as usual schoolhasdevouredmylife so cut me some slack.) Now, as for the dramas I actually finished: 'Juui Dolittle' was great but a little corny at times. 'Gekiryuu' ended with nearly all the mysteries solved, and all the characters having endured challenging changes, learned life lessons, reconciled with their pasts and decided to move on. 'Starman' shifted its emphasis from science fiction to family/friend relationships and got a little sappy and silly toward the end, but overall the drama was still fantastic! So 'Starman' wins.

The following are dramas that I started either toward the end of summer or during this semester. This time around is going to be a little different, because I've already finished all the dramas below. I'll select the "winner" at the end. 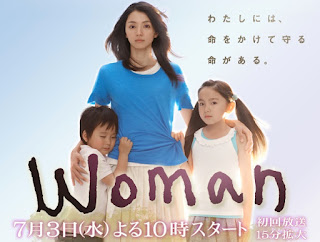 I honestly can't remember why I started watching this drama, other than because I read that its ratings were high and that Oguri Shun ('Juui Dolittle') was in it. 'Woman' is a heart-wrenching drama centered upon a single mother's struggle to come to terms with her husband's death, make ends meet, and raise two children with little help. She constantly puts herself last and endures one hardship after another, but she makes sure to put on a cheerful face in front of her children so that they don't worry. This drama is also about family, as the woman (named Koharu) reluctantly reconnects with her estranged mother, stepmother, and half-sister. The process of reconciliation incurs a number of setbacks, as Koharu learns some ugly truths about her father, discovers how her husband really died, and learns that she has cancer. It all sounds like a lot to handle, but what I loved about this show is that none of the dramatic moments or events are overdone. The acting is superb and the story is laid out in a realistic manner, putting the spotlight on a sector of the population (single moms) that doesn't tend to get as much attention in Japanese society. 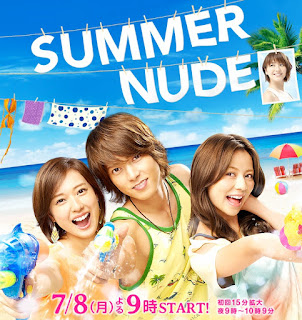 Literally, the only reason I started watching this drama was because Karina is in it. She's a very recognizable actress and she's one of my favorites. I really didn't know or care what the drama was about until I watched the first episode. After watching I realized that the show featured Yamashita Tomohisa ("Yamapi") as its male lead, whom I vaguely recognized as a popular singer-songwriter/idol-turned-actor. So basically, given its cast (which includes another favorite actress of mine named Itaya Yuka),  'Summer Nude' was expected to be a summer hit. The show is a light-hearted romantic comedy about love and friendship. Karina plays Natsuki, a chef who quits her career to become a wife, but is left by her groom on her wedding day. Asahi (Yamashita), a photographer, snaps a photo of her at the worst moment of her life. Afterwards, Natsuki retreats to a beachside town to run an old friend's restaurant for the summer and sort her life out. Asahi also lives there, and the two become acquainted through their shared group of friends. What follows amongst this group of young friends is a number of love triangles, confessions of unrequited love, an inability to move on from past relationships or failures, and some determined steps taken by each character toward following their dreams. Moving along at a steady pace, this drama is very easy to watch and features a number of storylines that help you feel connected to each character in some way. The only thing I don't get is the show's title. What in the world is 'Summer Nude' supposed to mean? Maybe because summer is a time for letting go of inhibitions and exploring possibilities, "nude" is supposed to represent being free, open, and vulnerable? That's just a guess, but I really have no clue. 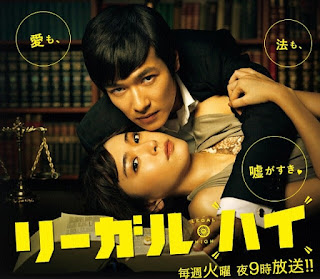 Last but not least is this fun legal drama/comedy. I read the hype about this drama when it first came out. But the lead actress (Aragaki Yui) had also played a lawyer a couple dramas before this one, and since I'd just watched that show, I didn't want to see what I thought would be the same role played over again. Oh, was I wrong! Rather than a domineering career woman, Aragaki plays a rookie lawyer who has high ideals concerning justice and morality. After leaving her first law firm, Mayuzumi Machiko ends up becoming the associate of Komikado-sensei, known as Tokyo's top lawyer who has never lost a case. Though he is an excellent lawyer, he's also a petty, rude, conceited, insufferable know-it-all who's not above tricking people or paying bribes to win his cases. He also only takes on cases from which he knows he'll receive an exorbitant fee to fund his wealthy lifestyle. The two constantly bicker while battling against their mutual enemy, the firm for whom both Mayuzumi and Komikado used to work. This drama is refreshing because not only is a different societal issue addressed in each episode, but this comedy is actually funny! I don't remember watching any other Japanese drama that's made me laugh so much.  I will definitely be watching this show's second season, which actually just ended yesterday.

It's tough to pick my favorite this time around because all of these shows were wonderful in their own way. In terms of which drama held my attention most, I'd have to go with 'Legal High'. But because it reminded me of my mom and her struggles as a single mom, 'Woman' comes at a close second.
Posted by Deela (Danielle G.) at 1:22 PM