This is my 50th book review, Women's History Month has just begun, and coincidentally The Handmaid's Tale is my most recent read. During my time at the store, a handful of high school customers repeatedly recommended this book to me with particularly earnest enthusiasm, so I bit. The girls pressed it upon me as if it would be in the interest of my future safety and well-being to read it; I needed to arm myself with it, just in case. Which sounds silly, but now I understand why they were so passionate and serious about this book. Apparently this offering from Canadian writer and activist Margaret Atwood is a staple in feminist literature and high school English/language arts curricula.

The Handmaid's Tale by Margaret Atwood 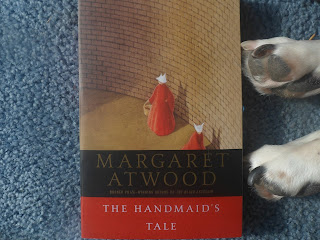 Men in the United States are bored and dissatisfied with modern times (not too long after the 1980s), feeling like there weren't enough structures in place for women to make them feel manly and stroke their egos. So a militarized Christian fundamentalist entity called the Sons of Jacob trashes everything and creates a totalitarian, paternalistic, woman-hating "utopia" called the Republic of Gilead, initiating a civil war at the same time. Within the first few weeks they assassinate the people in power, take over the US government, order that all women be relieved of their jobs, and eliminate their access to their own bank accounts, making them dependent on the men around them from the jump. And that's only the beginning.

Gileadean society is organized so that women are allowed only severely limited roles, which revolve around the interests of men and are color-coded by dress. Women are either Commanders' Wives in the new ruling class (blue), said Wives' daughters (white), widows (black), Marthas (cooks, housekeepers, servants; green), rotating Handmaids assigned to each household as concubines to produce children for the Commanders and their Wives (red), the Aunts who train the Handmaids before they're dispatched to their two-year posts (brown),  or prostitutes in secret government-run brothels. Women who are too incorrigible or of negligible use to be incorporated into society at large are deemed Unwomen (grey), relegated to cleaning up bodies and toxic waste in Colonies where they eventually die from exposure. The threat of being killed or sent to the Colonies constantly looms over Handmaids' heads especially, because if they can't produce a healthy baby within six years, they are discarded. (Infertility is solely the women's fault under Gileadean law. Three strikes, you're out.) This society is founded upon an ingrained and institutionalized mistrust of women, under the guise of protecting their virtue, removing distractions, and making life less complicated for them.

All of this is explained to us by Offred, the Handmaid who narrates the novel. She has lost her career, her home, her husband, her child, her mother, her best friend, and her name, and in order to survive imprisonment and retain her sense of self, she tells her story to a non-existent listener. She knows that things weren't always this way, and holding onto that knowledge is one of numerous forms of her quiet resistance. Offred's determined to survive this. As such, the conscious act of remembering who she was and what the world was like before gives her the resilience to hope that this nightmare will end within her lifetime. Though a supposedly new and improved structure, women here are still forced to perform the same roles as before: wife, maid, mistress, whore, chaste vessel, silent companion, mother, mother-to-be, mother-to-be-eventually or else. The world of this novel is extreme, but the expectations and perceptions placed on women aren't altogether different from the ones women have faced today, in the '80s, and long before then. The Republic of Gilead just makes it so everything is done strictly and overzealously according to men's whims, militarizing the operation and calling it Nature's norm, under which women either comply or die.


Another aspect that's not altogether unfamiliar is the fact that men in The Handmaid's Tale are consistently, pitifully, dedicatedly clueless about women's suffering, assuming that better for men means better for all, or simply not deigning to care about how the women around them feel. Like, why would you try to run away or kill yourself? Sure you're locked in your room all the time except for when you have permission to run errands, or when you're required to have sex with the Commander of the house while his Wife watches, and you're not allowed to read or write or wear what you want or go where you want or converse freely with other women, and your sole value to society is being able to produce children that will be seized from you. But hey, you've got a nice house to live in, you don't have to work, and you don't have to desperately vy for male attention anymore, so what do you really have to complain about? You get to focus on praying and making babies all day! What's the problem?

Atwood makes a chilling point in the epilogue that, "no new system can impose itself upon a previous one without incorporating many of the elements to be found in the latter" (305). This is one of the ideas that stands out to me the most in this book. The point of this novel isn't "Men suck! Women, beware and be ready!" (Although, if that's what you take from it... you know, stay woke by any means.) Rather, I think what Atwood calls readers to do first and foremost is to contemplate what in the Republic of Gilead speaks true to our existence at present. What kind of seeds are being planted and codified into law? What's so dangerous and terrifying about women having agency over themselves or any kind of authority over others? What are we sacrificing, and who are we devaluing in the name of preserving men's egos? Why can't we just let people (and yes, women are people too) live?

Chile. Margaret Atwood is cold for this one. She calls out all the BS, and just when you don't think the conditions of this dystopia can get any worse, they do. The Handmaid's Tale is a brilliantly disturbing work with a strong sense of purpose. It's one of those classics that I wish I'd known about sooner. Would highly recommend this book to all people. Nolite te bastardes carborundorum.


"Tell, rather than write, because I have nothing to write with and writing is in any case forbidden. But if it's a story, even in my head, I must be telling it to someone. You don't tell a story only to yourself. There's always someone else. Even when there is no one. A story is like a letter. Dear You, I'll say. Just you, without a name. Attaching a name attaches you to the world of fact, which is riskier, more hazardous: who knows what the chances are out there, of survival, yours? I will say you, you, like an old love song. You can mean more than one. You can mean thousands. I'm not in any immediate danger, I'll say to you. I'll pretend you can hear me. But it's no good, because I know you can't" (39-40).

"I used to think of my body as an instrument, of pleasure, or a means of transportation, or an implement for the accomplishment of my will. I could use it to run, push buttons of one sort or another, make things happen. There were limits, but my body was nevertheless lithe, single, solid, one with me. Now the flesh arranges itself differently. I'm a cloud, congealed around a central object, the shape of a pear, which is hard and more real than I am and glows red within its translucent wrapping" (73-74).