Pretty simple motivations for reading this one. Spotted this novel on one of the display tables when I still worked at the store. I saw that it was well-esteemed and about North Korea, so I bought it. In high school I brought Liberty in North Korea (LiNK) to my school, I took a Korean history course as a college sophomore, around that same time I read Kim Young-Ha's Your Republic is Calling You, I was super into K-pop and K-drama from 2009-2013, and I have friends who study South Korea/North Korea relations. So while North Korea isn't a particularly passionate interest of mine, I can't help but be curious about it. And I won't say that this book ended up being one of my favorites ever, but my reading experience was very similar to when I read One Hundred Years of Solitude; once I cracked it open, I was hooked. It's full of action and suffering and hidden desires and deceit, and I always had to know what would happen next. To the point of cancelling plans, I spent most of this week with my nose buried in this book, and I regret nothing. 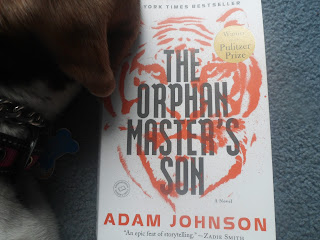 Part One gives us the third-person perspective of Jun Do, a North Korean boy who grows up in an eastern coastal town. After his mom was stolen away by the government to be an opera singer in Pyongyang, Jun Do was raised by a single father (the titular Orphan Master) who took up running an orphanage to protect what remained of his small family.

Ironically, Jun Do's work serving the fiercely proud and secluded North Korean regime increasingly exposes him to the outside world and what he might be missing. He spends his adolescence as a soldier in underground tunnels, going beneath the DMZ to resurface many times in Seoul, a city that seems to be in the future. He's then recruited to help kidnap people in the same way his mom was kidnapped, except his team steals people away from Japan. As a reward for turning in a fellow soldier who tried to stay in Japan, Jun Do is sent to an English language school before being posted on a fishing ship to intercept and record radio messages transmitted by other countries. He's even taken on a diplomatic trip to Texas as an interpreter. But even consistently following orders and repeatedly resisting the temptation to defect don't keep Jun Do safe, and Part 1 ends with him being deposited into a prison mining camp upon returning to North Korea. No one, not even the most devoted to the regime or the highest up in its elite ruling class, is safe from denunciation, torture, or erasure.

Part Two alternates between three voices. In addition to Jun Do's third-person narrative, we have national PA announcements (as introduced in Part One) which set the tone for the government's spin on current events and Jun Do's story. Lastly, we have the first-person reflections of a nameless torturer ("interrogator") who leads part of the division in Pyongyang that's assigned to question and punish Jun Do for impersonating Commander Ga, one of North Korea's most respected athletes and military personnel. This second part of the novel has the reader invested not only in Jun Do's fate, but also the fate of the "national actress" named Sun Moon. What started as a joke tattoo of her face on Jun Do's chest morphed into a desperate fandom, into an obsession, and finally into an indefatigable (and one-sided?) sincere love for her on Jun Do's part. Having projected his shortcomings and strife onto her, he idealizes her as both a maternal savior and as the woman of his dreams. He goes so far as to infiltrate her home and appoint himself as her replacement husband, determined to free her from the confinement of being Commander Ga's wife and Kim Jong Il's favorite female companion. I'll let you find out for yourself who makes it out alive, and in what fashion.

In the North Korea that Adam Johnson presents, stories are paramount. They sustain people's identities, they keep people alive, they apportion value to some and condemnation to others, they make it so certain things never happened and certain people never existed. And because people here survive by demonstrating complete harmony between themselves and the state, every character's story in The Orphan Master's Son is marked by some sort of loss, and everyone masks or stifles some part of their true selves. Jun Do desperately wants to know who he is and yearns for some sort of control over what happens to him. The interrogator craves sincere human connection and wants to know that his life story means something beyond the brutality he uses to piece his victims' biographies together. And Sun Moon, rather than being forced to appease and entertain the men around her, wants to be able to live a simple life and make art on her own terms. Each of these characters manages to reclaim power in their own way, but not before confronting their status as property of the state.

"I couldn't get that brand out of my mind. I saw it scalding red and bubbly across Commander Ga, I imagined its scars, ancient and discolored, running down the thick backs of all the old Pubyok, I saw Q-Kee's perfect body disfigured by it, a burn from neck to navel, splitting the breasts toward the sternum, the belly, and below. I didn't use my Pubyok badge to board the subway's priority seating car. I sat with the average citizens, and on all their bodies, I couldn't help but see 'Property of' in raised pink letters. The mark was on everyone, only now could I finally see it. It was the ultimate perversion of the communist dream I'd been taught since childhood" (401).