Concerning the last round, 'Daini Gakusho' got boring so I stopped watching. 'Kamo, Kyoto e Iku' was a fantastic show but the ending was rushed. 'Saikou no Rikon' was the best out of all three dramas, but the last two subbed episodes are still nowhere to be found on the internet. So the winner by default is... 'Kamo, Kyoto e Iku'.

My final week here in Japan is approaching, and before I leave I wanted to write about the dramas I've been able to watch during my free time this summer. Here they are, in the order that I started watching them in. 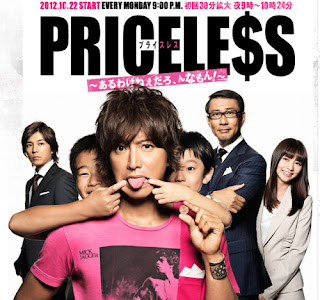 This drama stars Kimura Takuya, a popular actor/singer who's been around for a long time. I started watching it because of the hype it received and because it also stars Karina (far right), who's one of my favorite Japanese actresses. Kimura plays an ambitious and well-liked employee at Miracle Thermos who gets framed for leaking secret information by his secret half-brother so that he can't inherit the company. He loses his job, his apartment, everything. He ends up living in a house with other homeless people, and for the first time in his life he learns the value of money and experiences how truly difficult it is to earn a living. With the help of his friends, he starts his own company and makes a comeback, leading to a showdown with his secret half-brother. This drama was so much more entertaining than I thought it would be. With so many economies in horrible condition lately and so many people struggling to get by, this show has a real story that I think can resonate with many people. The pace and nature of the main character's journey from riches to rags to riches is more akin to fantasy than I would've liked, but overall it's a very inspiring story.

I honestly can't remember how I heard about this drama. But I found it and once I realized it was about animals, I was hooked. It depicts the harsh realities of a veterinarian's duties and the fierce competition that goes on between vets. In the words of the title character: "Veterinary medicine isn't charity, It's a business." Juui Dolittle can't actually talk to animals, but he's such a skilled veterinarian that it's as if he knows exactly what his furry patients want. Each episode has the same structure: someone has a problem with an animal, for some reason Juui Dolittle is the only vet in all of Tokyo who can or is willing to solve the problem, he charges an exorbitant price to do a really difficult surgery, and no one is sure how it'll turn out (except we really are, because Juui Dolittle almost always succeeds). Watching that scenario over and over gets a little old. The show tries to create these really dire situations to pull at people's heartstrings, but you can only dramatize a ferret having gallstones and dogs suffering from airborne contagious diseases so much, and then it just becomes silly. Still, it's a pretty interesting show, and Oguri Shun (who plays Dolittle) and Inoue Mao (who plays his assistant) lead this drama's seasoned cast. This show is great for animal-lovers who want an easy drama to watch.

Before this summer I'd had the same Japanese professor for 3 semesters in a row, and she always managed to mention actor/singer Fukuyama Masaharu in her lessons. He's her favorite celebrity and is immensely popular in Japan for his manly image and varied talents. 'Galileo' is one of his most famous works. Apparently it was a huge hit when it came out in 2007, so much so that a sequel started airing this year. After watching 'Juui Dolittle' I couldn't decide what to watch next, so I figured I'd see what the hype was all about and watch 'Galileo'. In it, Fukuyama plays a physicist who helps a rookie cop (played by Shibasaki Kou, another actor/singer) solve murder mysteries. Each episode features a gruesome and bizarre murder, and the solutions that the drama comes up with are so equally bizarre that I wonder what kind of person got paid to come up with such things. I can definitely understand why it was popular. Besides the fact that it features two pretty people, of course. But for some reason I couldn't get into it. Maybe it was because it's summer and I'm in the mood for something upbeat and not so dark, or maybe it's because 'Galileo' didn't end up being '"the best drama evarrr" like it was hyped up to be. Either way, while this drama did entertain me, I wasn't wowed enough to finish it. 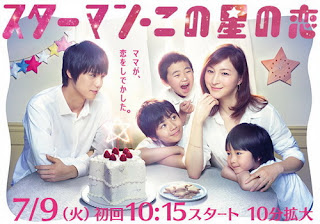 I love this show. It has the most unrealistic premise ever, but I love it. I started watching this drama because of its lead actress, Hirosue Ryoko. She only appeared in one episode of 'Galileo', but something about her made me want to see more of her work. And then, coincidentally, I found out she was starring in a new drama this summer and I was all in! Hirosue plays Sawa, a single mom who lives in the same small town she was born and raised in. Her husband ran off on her, and she struggles to work everyday and raise their 3 sons with the help of her grandmother. At the same time, a man with a mysterious past arrives in town, tries to kill himself, and fails. One day a star falls from the sky, and soon after this the man appears in front of Sawa during her drive home. It's as if he's fallen from the sky. (Like a star. See where this motif is going?). Because he's lost his memory and doesn't have a clue who he is, she decides to make him her husband so that she won't be so lonely and her children will have a father. She names him Hoshio (lit. "star man"). And everyone around her just goes along with it. They soon realize that he has super powers, which makes them wonder if he's an alien from outer space. Wacky, right? In addition to that, the drama has an incredibly touching and relatable theme of getting a second chance and starting your life over, and who hasn't wished for these things at least once in their life? Even though the premise is way out there, it's executed so well and it's a story I've never heard of before. This show is so fresh and interesting that I can't help but love it. Additionally, I find singer YUKI's rockin' theme song contribution "STARMANN" to be quite a chill yet mesmerizing. 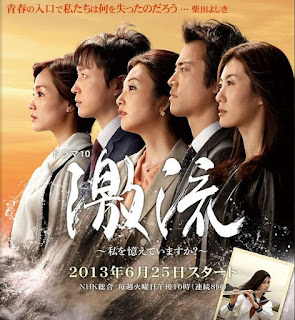 I started watching this drama because of Kuninaka Ryoko (far left), an actress who appeared in an episode of 'Juui Dolittle'. 20 years ago, a group of middle school friends went with their class on a field trip to Kyoto. On the way back one of them, a girl named Fuyuha, disappeared. In the present, the remaining friends are all experiencing some troubles in their lives. One woman is an editor at a publishing company whose career and marriage fall apart. One man is a cop investigating a strange high-profile murder case. One woman is a novelist making her comeback as a singer, who becomes implicated in said murder case. One man lost his job and his family as a result of an affair, and is stalked by his mistress when he kicks her to the curb. One woman has turned to prostitution in order to maintain her family's high-class lifestyle, and her relationship with her pimp turns violent. One day, all 5 of them receive an email from the girl who went missing: "Do you remember me?". Then weird things start happening and all of their lives get still more complicated. Who is doing this to them? Is Fuyuha still alive? I can't wait to find out!

My go-to Asian drama/movie site shut down for good, but all of these dramas can still be found at here. Check them out if you're interested!
Posted by Deela at 8:13 AM