Yesterday was a rough day, and after classes ended I was frustrated and exhausted. So I was delighted to find when I got on my computer that I had an email from... my grandpa! My grandpa's 75 years old, y'all. He knows how to use a computer and send emails, but he's NEVER emailed me before, so this was a big deal. He was just checking up on me, and his message was very sweet. But as usual Grandpa had something snarky to say at the end, "You will probably come back speaking only Japanese." Knowing him, he did not mean this as a compliment, like Your Japanese will have improved so much that you'll speak it all the time even after you leave Japan. What he meant was, You'll have forgotten your language and we're the ones who are going to have to deal with you. Gotta love Grandpa. 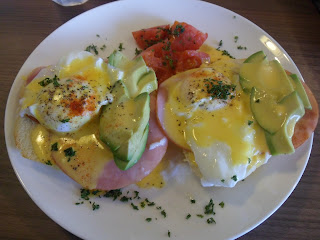 Later Ivy and I visited Café Gold Coast, a local café here in Hikone, for late lunch/early dinner. Bryen joined us after he got off work. The owner of the café lived in Australia for 6 years working as a chef, then returned to Japan and opened his own restaurant, thus the name "Café Gold Coast". His English is pretty good, and all of his staff seem to speak some English as well. (I don't know if that was a requirement or just pure coincidence, but either way I think it's pretty cool.) I ate ham and avocado eggs benedict, which was delicious! How ironic though, my first time eating such an American dish was in Japan. Ivy and Bryen just ordered ice cream because they were having some sort of food gathering in Bryen's room later. We left the café and parted ways; I came back to JCMU and they went to Beisia to buy ingredients. After I finished my Thursday Skype date with Ma I knew that I needed to do homework and study, but I didn't feel like it so I went down to Bryen's room to eat up whatever scraps they had left. We sat around talking and singing along to Japanese and Korean songs on Ivy's iTunes, and everything was cool. Then things got weird, thanks to me. Basically, I had a lot of pent-up energy and stress, something made me laugh too hard, and I lost it. Once I started cracking up I couldn't stop, and at some point I ended up on the floor.

While I was there I also tasted beer for the first time. No, that had nothing to do with me being on the floor. This happened afterward. I don't know if it actually counts as tasting, though. While I was snooping around Bryen's kitchen and eating his snacks I found this can of Kirin Beer. For some reason I decided to try it, but as soon as that putrid liquid touched my tongue I spit it out because it was so disgusting. I have no intention of touching alcohol. Ever. It's just not for me.

I hung around for a little while longer and then made myself get to work. I wasn't any more motivated to do it, but I was in a much better mood.