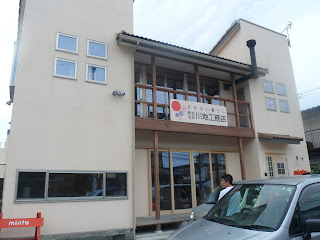 I spent the afternoon with Ivy and Bryen  again today. This time we went to minto, the real estate/contractor and lifestyle/wellness business that Ivy's host mom, Tanaka-san, works at. minto does a little bit of everything that has to do with the concept of "living well".  Apparently her boss,  the 社長 (shachou/company president or director) said that he wanted to meet American students and practice speaking English, so they planned a welcome party for us! Even though we've already been here a month, how sweet is that? 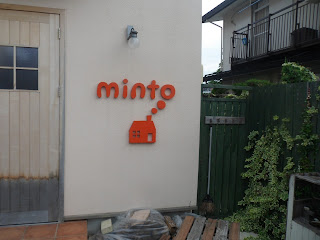 The minto building serves as a  model house, an office, and a lifestyle/wellness center. It's a splendidly-designed building, with a clever mixture of cozy and modern, business and home. It's one of the most interesting establishments I've ever visited.

Besides us 3, most of the attendees were women who work for minto. Two of them brought their children, so there were also 3 adorable babies there. And of course Ivy's host parents (the Tanakas) and  the shachou were also present. Excluding dem babies, there were about 13 people in total. 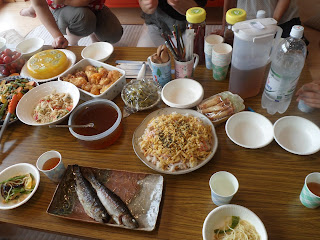 They prepared so much food! As usual I can't  even tell you exactly what I ate, but it was good and it was free and that's all that mattered. Ivy made a dish with quinoa and it was spectacular!

Conversation started with the questions we typically get: How long have you been studying Japanese, why do you want to study Japanese, have 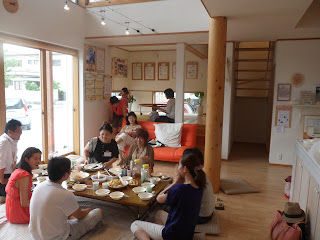 you been to Japan before, what's your favorite Japanese food, etc. But as people started getting more comfortable, we got more interesting questions: What's your dream for the future, would you ever marry a Japanese person, how has Japan differed from the image you had of it before you arrived?

Another topic we also kept returning to was language. Lately I've been disappointed in myself because I don't feel like my Japanese is improving enough. As a result, I've been putting a lot of pressure on  myself. But talking to the people at minto helped me understand that to some degree, everyone has difficulty learning a new language. While I struggle with Japanese, they have weaknesses when it comes to English. In fact, there are some aspects of Japanese that even Japanese people have trouble with, so I shouldn't expect to be perfect. Or ever become perfect, for that matter.

One woman who calls herself  ピコメグ (Picomegu) is a 落語 (rakugo) performer and a laughter yoga instructor, among other things. Basically, she helps people heal through laughter and alternative methods for a living. Rakugo is a traditonal Japanese art of one-man comedic storytelling. Since Bryen, Ivy, and I were there she was gracious enough to perform a short piece for us in English. It's called "People Often Pretend to Know Everything in a Museum".

In return for her sharing her talent, Ivy and I each sang a song for everyone. Bryen managed to get out of doing anything. This time.

Everyone was so kind and funny. We were shown nothing but warmth and hospitality, and I'm so glad we were invited to come. Though I've met some pretty cool Japanese college students since coming here, I've still had this stereotypical image of Japanese people (especially adults) as stoic, standoffish, and uptight. It was refreshing to meet adults who were so open and convivial. I mean if you think about it, interacting with most people is somewhat similar. You meet and it might be a little awkward at first, but once people warm up to each other everyone usually has a good time. Hopefully we'll go back before we leave next month. Thanks to the Tanaka family and the folks at minto! 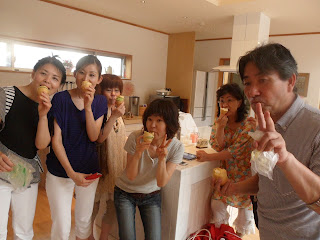