Hikone-jo and some other things

Classes ended, I had no other plans, the weather was perfect, Ivy was willing to go with me, and it was on! 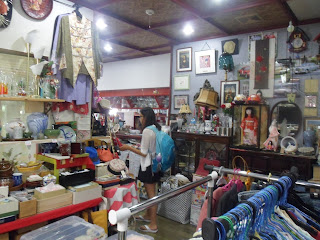 We made a few stops along the way. Today's Friday, so of course I had to stop at Vidal. Then we headed to an antique shop/café called Apple Jam that Ivy had wanted to visit. It was a small but incredibly well-organized place, and I found a souvenir for Ma there. All she wanted was something with Japanese writing on it, and I finally found something that was to my liking for her.

Speaking of souvenirs, when I asked people what they wanted me to buy them while I'm in Japan, most of them requested something "authentic-looking" "traditional Japanese style", etc. You'd be surprised to know how difficult that stuff is to find here. Many malls and stores try to be modern or have an international/Western appeal, so though their products might cater to Japanese tastes and sensibilities, they're not all that different from what you'd find in the States. And most of the merchandise I've seen with writing on it has English words and phrases. Sure, Japanese is written everywhere and some  shops are more traditional than others, but as far as gifts go, you have to go to really specific places to find the "authentic" and "traditional" things that foreigners want. Like souvenir shops or antique shops. 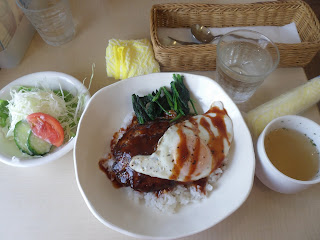 I've decided not to buy any souvenirs for people because I'm too cheap and lazy. First, I don't like spending money. Second, when I buy something for someone, I can't just go anywhere and buy anything. It has to be of decent quality, it has to be special, it has to mean something, and it can't be too expensive. My method of shopping for people takes thought, time, energy, and most importantly money that I'm not willing to spend. Sorry folks. But I can't say no to Ma; she gave me life so I made an exception for her.

Anyway, back to my day. After leaving Apple Jam we ate lunch at a café called Poemu. I ate loco moco, which consists of rice topped with a hamburger patty, fried egg, and gravy. It's a traditional Hawaiian dish, but oddly enough my first time eating it was here in Japan. 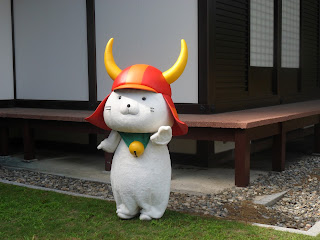 Onward to Hikone Castle! 彦根城 (Hikone-jō) was built in the early 17th century, and is considered to be Shiga Prefecture's most significant historical site. It's a Japanese national treasure and is even in the running to become a World Heritage site. In short, it's a very old and important place. We got there just in time to see ひこにゃん (Hikonyan), a samurai cat and Hikone Castle's mascot. Many castles in Japan have mascots, but Hikonyan is known as the most popular mascot in Japan. 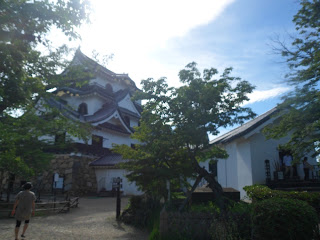 We walked up many steps and turned a few corners to reach the castle. The castle itself is small. It only has 4 floors and there are few museum-like displays. It hasn't been prettied up. Inside is all wood and white walls. It's simple. In my opinion, however, that's exactly what's special about Hikone Castle. It's not particularly refined or luxurious. It hasn't been remodeled to suit modern tastes or impress tourists. It's quiet. It is as it was. 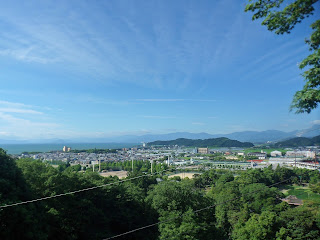 We went through the whole castle and enjoyed some spectacular views of Hikone from the top. Before heading back to JCMU I bought a Hikone-jō  pin for myself. There's a specific reason that I got a pin as opposed to some other trinket, but I'll explain that after I return to the States.

I should be shutting myself in this weekend to work on my final project that I have to present next Thursday, but I'm just fed up with class consuming all my time and I'm getting cabin fever. So I'm going to Nara with Ivy and Bryen and I refuse to feel bad about it. Of course, y'all will read all about it when I get back. 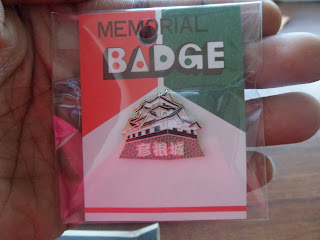