Before I even came to Japan I knew that I would definitely make two trips: one to Osaka to spend time with my friend Fumiko, and one to Kyoto to spend time with my friend Jenny. Yesterday, I went to Osaka! All I'd wanted to do was have a good time, not think about class, and eat okonomiyaki and takoyaki before leaving. I did so much more and had so much more fun than I had anticipated!

On the way to Osaka

I was really nervous when I got up in the morning because I'd never traveled alone in this country before, and I was just praying that all would go smoothly. To my relief, when I got to Hikone Station I found a fellow JCMU student named C waiting for the same train as me! We rode together, and along the way an American woman also boarded the train and sat with us. She's lived in Japan for 17 years, and she currently teaches at Tenri University. She even gave birth to and raised here son here, so even though he doesn't have a drop of Japanese blood in him he speaks the language like a native! How cool is that? As an expat, this woman could understand our position as foreigners in Japan and had a lot to say about her experiences. "How's it been interacting with Japanese people? You say two words and they tell you how good your Japanese is, don't they? It's annoying, right?" The truest and most remarkable thing she said was, "Japan is uglier, it's prettier, it's different from what people think it'll be like."  The three of us had a wonderful conversation, and I was at ease as she and C got off in Kyoto and I had to travel the rest of the way alone. 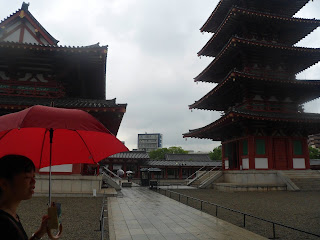 Once I arrived in Osaka and Kumiko met me at Tennoji station, we set off for Shitennō-ji! Shitennō-ji is known as Japan's oldest Buddhist temple, having been first built over 1400 years ago. We entered the building on the left to watch monks doing rites and conducting prayer. It was crowded because many Japanese people were gathered there to pray and be blessed by the monks.  I'm embarrassed to admit that I started to tear up during this. Watching those monks carry out practices that have been passed down for over 1000 years, standing amongst all those Japanese people gathered together seeking blessings and guidance... I felt honored that I was allowed to witness such a sacred moment. Afterward we entered the tower on the right and climbed the stairs halfway to the top. Each floor houses 4 statues of Buddha and hundreds of tiny statues engraved with the names of monks who have served at Shitennō-ji and passed away. 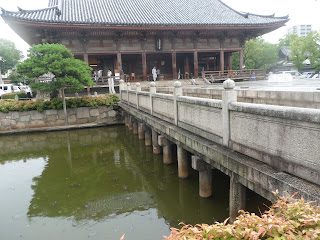 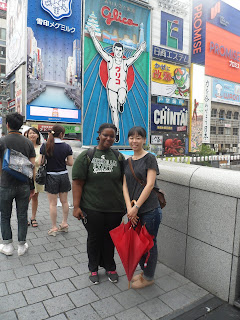 We looked at the rest of Shitennō-ji's temple buildings and then took a taxi from there to Dōtonbori. Dōtonbori is a huge shopping area with many shops, huge signs, and bright lights. It's one of the busiest areas and most popular tourist attractions in Osaka. As y'all know I'm not a person who likes to buy things; I just wanted to go there to see what it was like. While there Fumiko and I did the tourist-y thing and took a picture in front of the Glico running man sign, a highly-recognizable symbol of Dōtonbori. Then, before leaving we stopped at a popular okonomiyaki restaurant called Botejyu. Okonomiyaki is hard to describe, but it's basically a savory fried pancake that's stuffed with deliciousness. It's one of several foods that Osaka's famous for. We ordered one with negi (green onion) and a "modern" one with shrimp and shared them. 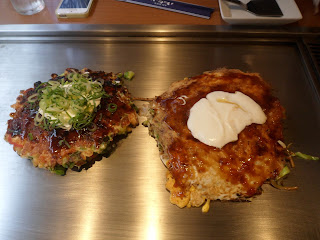 We took the subway and a train to get from Dōtonbori to Osaka Castle Park. This place is huge! It's not only a public park, but it also contains Osaka Castle, athletic fields and Osaka Castle Park Hall, where concerts are often held. In fact, while heading to the castle Fumiko and I passed droves of people waiting in line for a Mizuki Nana concert. 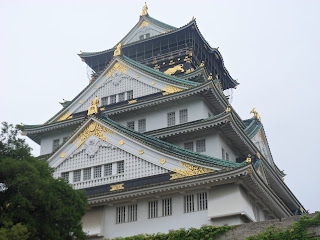 Japanese feudal lord Toyotomi Hideyoshi had Osaka Castle built in the late 16th century, and like Nagoya Castle it has been damaged and restored numerous times. Osaka Castle is much bigger and more refined-looking on the inside, but if I had to choose which one I liked more, it'd have to be Nagoya Castle. That was the first Japanese castle I ever went to, so maybe that's why I remember it so fondly. Also, instead of climbing all the stairs like I did at Nagoya Castle, Fumiko and I took the elevator up Osaka Castle then took the stairs down. There was no grueling character-building climb to add to the experience, so the whole thing went by really quickly. Also, though Osaka Castle has displays on each floor related to Hideyoshi and the history of the castle, Nagoya's floors are more like a real museum; its displays are more informative, more interactive, and more interesting in my opinion. However, I will say that the view from the top of Osaka Castle is way more impressive. It's abolutely stunning. I didn't realize until I got up there what an enormous and beautiful city Osaka is. After making our way down we took a break and ate green tea-flavored ice cream in the park before heading to our next stop...

Read part 2 to find out where we went!