Whew! This past weekend was busy! Hikone Castle on Friday, Nara on Saturday, and kabuki theater on Sunday. I'll just talk about my trip to Nara today. I went with the usual suspects (Ivy and Bryen), plus another JCMU student named Anna. 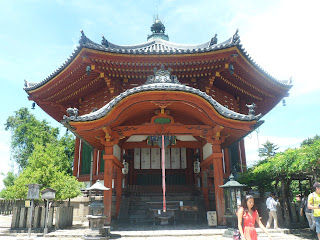 Nara is one of the more historically significant cities in Japan. It was the capital of Japan for about 75 years back in the 8th century, preceding Kyoto and the current capital, Tokyo. It is also home to many Buddhist temples, which apparently wielded a lot of power at one time and remain considerably important and influential today. 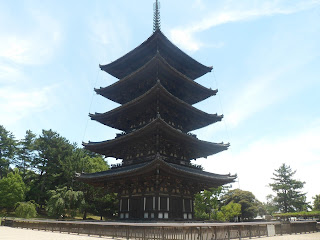 Our first stop was 興福寺, (Kōfuku-ji) which we stumbled upon by accident. Bryen, Ivy, and Anna saw some stairs lined with red banners, raced up them, and surprise! 1300-year-old Buddhist temple at the top. We entered at one end and walked to the other, where a 5-story pagoda stood. And guess who were chilling right in front of it? Deer! 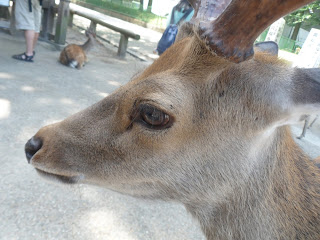 Nara is known for its shika (deer), because long ago they were believed to be messengers of certain Shinto gods, and were protected as sacred creatures. Today they are no longer considered sacred, but are still protected as national treasures. There are over 1,000 deer in Nara Park, which is accessible from many major Buddhist temples and tourist attractions in the city, so you'll see them roaming freely around those places too.

These deer aren't afraid of humans. They also aren't hostile, but they can be aggressive when it comes to food. Really, they just want to chill and get fed. They know that all of the humans around them are tourists. They know that these humans want to pet them. Most of all, they know that these humans have food. So they watch people buy deer senbei (rice crackers for deer) from the numerous senbei-selling stands that are around, then follow them until they give them up. I'm not kidding. Walk up to
the stand. Pay ¥150. Receive pack of senbei. Turn around. Deer right in your face. 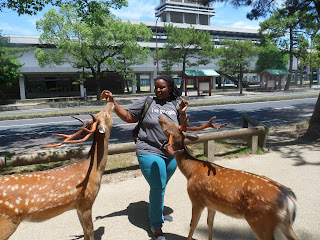 When we reached Nara Park Bryen tried it first and was surrounded by 6 deer, one of which started chewing on his shirt. When I tried it only 2 deer followed me. I wasn't even afraid of them, but they rolled up on me so fast that I was overwhelmed and freaked out. Thankfully you can't tell as much in this picture.