This is of no consequence to what I'm about to write, but the title of this post is supposed to be punny, f.y.i.

I feel like I say this every week, but sorry for the delay. I still haven't been feeling well, I had to prepare for class today and it took longer than I expected for my second vlog to load on YouTube, so I haven't been able to write about my weekend until now. But on with it: I went to Kyoto for the first time on Saturday! 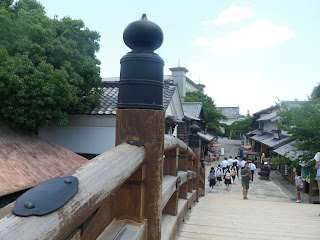 Almost all of us JCMU students went on a field trip to Kyoto, and our first stop was Toei Kyoto Studio Park. It was... just okay. Are there any Metro-Detroit readers out there who know about Greenfield Village? Well I enjoyed Toei Kyoto Studio Park only slightly more than I've ever enjoyed Greenfield Village. It's a nice place to walk around on a clear weather day. There are a lot of nice things things to see, surprisingly real-looking recreations, theme-related activities, actors dressed in character. And who wouldn't appreciate stepping back in time for a few hours? But historical theme parks always underwhelm me at the end of the day. There are few places that can pull off such an odd mix of intrigue and boredom, but historical theme parks always seem to get it just right. I can't say that Toei was completely lame, but suffice it to say that I didn't have the time of my life there. The studio park, or 映画村 (eiga mura/movie village) serves dual functions: theme park and movie set. Because the park is designed to resemble an Edo-era village, period piece productions always have a ready-made set available. As I was leaving the park, I actually stumbled upon a real shoot going on! The crew just blocked off a stretch of "street", set up their equipment, put up signs telling the crowd to be quiet and not take pictures, and went to work. They were really serious about the "no cameras" thing, but I was able to take one picture from behind. 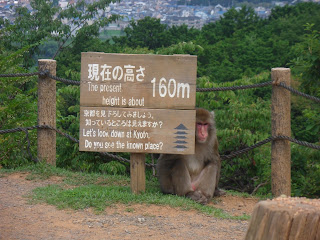 After spending some 3 hours at the studio park, we boarded the bus and headed to the Arashiyama district of Kyoto. Arashiyama is a particular tourist hub due to its scenery. The massive Katsura River runs through it, so many people come to sit by it, visit the shops along it, fish in it, ride boats down it, or walk over it on the Togetsukyo Bridge. The area is also known for Mt. Arashiyama, which for a small fee you can climb to... see monkeys! Yes, I with my fat, sick, asthma-ridden self climbed a mountain just to see some monkeys and get a spectacular view of Kyoto. I admit that it wasn't the best idea given my condition. But I survived! I did it, and I don't regret it. Plus, I shot a vlog for y'all at the top! You're welcome.


﻿
We were only in the Arashiyama area for a total of 2 hours, then we boarded the bus back to Hikone. To be honest, I don't think that this trip gave me a real taste of Kyoto. I had a feeling it wouldn't. But it seemed like everyone else at JCMU had already been to Kyoto, and at least now I can say that I have too! I plan on going back later this month to visit a high school friend of mine anyway, so no worries. I've still got a month left here in Japan, which is plenty of time for exploring.