Whew! I can't believe I still have so much to talk about. Today was without question my busiest and best Friday ever since coming to Japan! 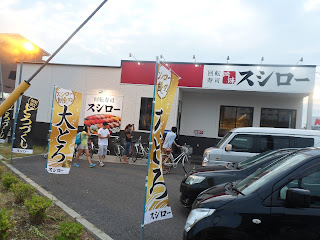 After the curry party I had a couple hours to chill before heading out yet again for... 回転寿司 (kaiten-zushi) and karaoke! Kaiten-zushi is often referred to as "conveyor belt sushi". Sushi dishes go around a conveyor belt, and when you see one you like, you just take it. You pay once you've finished stacking up plates and eating your fill. At the place we went to, スシロー, there were dishes you could just take, but there was also a touch screen system for you to order specific items that would roll out on special plates marked for your table. To say that the 5 of us "ate a lot" is an understatement. I mean there were so many interesting and enticing things on the menu, how could we resist? One of the dishes I tried was natto (fermented soybeans) wrapped in seaweed. Everything I ate was delicious, except for that natto. Don't ever put natto in your mouth. Ever. Like seriously, never. If you don't like gagging or aftertastes reminiscent of passed gas, heed my advice. 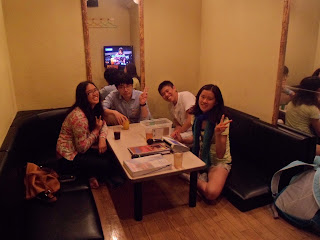 We headed to a karaoke place called A-Zone after having stuffed ourselves silly. This was only my second time doing karaoke and my first time doing it in Japan.  I think the people you go with really make a karaoke experience enjoyable, and my group of buddies were beyond fantastic! I almost peed myself twice (laughing too hard), and I'm pretty sure I won't be able to talk tomorrow (screaming singing with too much passion). But it was all worth it. I had genuine fun with genuinely fantastic people. Who can ask for more than that on a Friday night?
70 Days in Kansai photos
﻿
﻿﻿﻿﻿
Posted by Deela (Danielle G.) at 11:59 AM