This was our first full week of classes, and it's been just as intense as they warned us it would be. 4 hours of class a day + at least 4 hours of studying a day = schoolisdevouringmylifeagain. So it looks like I'll only be able to write on the weekends. I'll try to post more often than that, but I apologize in advance if you only hear from me a couple times a week. Good thing is, I've been cooped up because of my studies, so I haven't done much this week. Which means, y'all haven't been missing much. But anyway, here goes.

Today I woke up and my eyelids were SUPER swollen. I've had this problem before, but it's never been this bad. I looked like a bloated fish, or like I got in a fight and was punched multiple times in the face. I sent pictures of my eyes to Ma and was thinking of sharing them here, but I think I'll spare y'all. You'll just have to take my word for it. I looked absolutely crazy. But my eyelids were back to normal by the time I went to class, so no worries. I'm only telling this story because I thought it was funny. 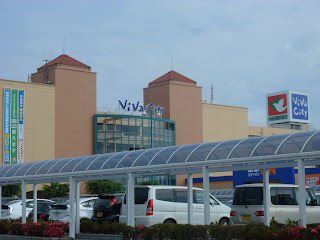 After class a bunch of us went on a tour of a nearby mall called Viva City. Tsubasa was the guide for my group! We took the train to get there, which was my first time riding a train. Viva City was... a mall. Nothing mind-blowing about it. But it was very clean and also had a grocery store, huge game center, movie theater, bowling alley, and karaoke among other things. We went to the game center and did purikura (プリクラ). Purikura are photo booths you go into to take pictures with your friends. They're very popular with young people, especially girls, because the booths have special effects that can make your skin look brighter or your eyes look bigger, etc. They basically make you look prettier (or weirder, depending on your tastes). You can also draw on them or add messages to them before you print them out. I still don't get what all the hubbub is about, but it was fun doing purikura  once. 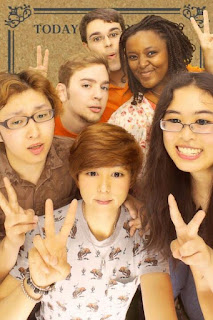 After we took the train back to Hikone station, I biked back to JCMU all by myself. I probably sound childish, being proud of something like that. First I'm able to sleep until 6am, then I'm going to the grocery store and cooking for myself, and now I'm riding the train and biking home from the station on my own. These things seem ordinary, but they're different when you're in a foreign country. You actually have to think about these things and plan them out. You have to become really aware of your surroundings. You have to learn how to communicate. You have to figure out how to live in this very new, yet very real place. So you almost are like a child again. At least, that's how I've felt.

I stayed inside all day today. Literally. My only respite was a half hour set aside for celebrating the students among us who had June birthdays. We ate ice cream, drank pop, sang, and joked. It was absolutely great! But unfortunately this was the highlight of my day.

Scratch that, I did have another highlight. I started outlining my first vlog! I plan on shooting it on Sunday, right on the edge of Lake Biwa. Look out for that soon!

Today I actually went outside...to the grocery store! Also, the one other person who was in my class decided to move back down a level, so now I'm the only person in my class again.

After class, the six of us planning to do homestay had an orientation meeting with the lady who organizes the homestay program. People start moving out on Saturday. In my case everything is all set, I just need to decide whether I'm actually going to do it or not. My homestay wouldn't start until July 9, so while everyone else has decided I still have two weeks to think about it. I know that this is a great opportunity, but I'm not sure if it's right for me.  So I'm going to take as much time as I'm given to carefully consider my options.

Today was Thursday, which meant Skype day! Even though I'm on the other side of the world, it's nice to know that my family is still thinking about me. I had my usual Skype date with Ma and once that ended I received a video call from my uncle and cousins! I didn't even know they were on Skype! What a pleasant surprise. 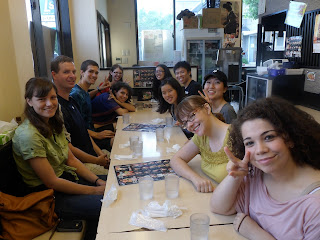 After class, the usual out-and-about crowd went to Osaka to shop and eat and party for two days. The rest of us went to a local ramen shop called Johnny's. I can't tell you what I ate because I couldn't read the menu, but I can tell you that it was fantastic! 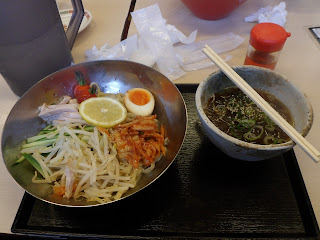 Also, those of us remaining here at JCMU decided on a whim to go on a day trip to Nagoya tomorrow! I was hesitant at first when I was invited to go, but then I figured, Why not? I might be nervous about travelling around, but I'll be with other people and there's really no reason for me not to go. So I'm going!

Why not? I have a feeling I'll be saying and thinking this a lot while I'm here.