Sleeping on the Train

The train to Nagoya was crowded, so I and another girl named Emily were the only two in our group to get seats at first. Even though we'd all gotten up early to catch this train, I hadn't planned on napping because I'd had full night's sleep and eaten breakfast. But the seats were so comfortable and our seats were facing in the opposite of the direction that the train was moving and the sensation  was so soothing... we were both knocked out within minutes. Thanks to Tsubasa for snapping this picture, and to the rest of y'all who watched him do it. Y'all were so wrong for this, but I can't even be mad! 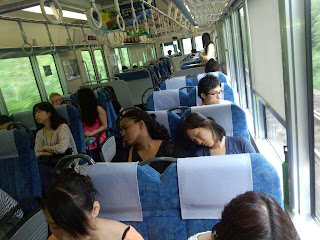