Instead of having class today, all of us were put in pairs and sent to visit elementary schools! Over the years this has been arranged between JCMU and the Hikone Education Department to facilitate cultural exchange, maintain an amicable relationship, and so on. I was paired with a guy named John, and we went to 高宮小学校 (Takamiya Elementary School).
﻿
﻿Usually I'll take pictures of any random thing or person with no qualms. But a school is supposed to be a safe place, and I don't feel comfortable taking pictures of kids in such close proximity without their parents' permission. It just doesn't feel right to me. If some random stranger or foreigner showed up at your kid's school, took pictures of them without you knowing and put them on the internet, even if it was just on some innocent blog, you wouldn't be happy about it would you? Didn't think so. So unfortunately for y'all, I can't personally show you what Takamiya or its students and staff look like. But below is a picture of the school from the City of Hikone's website. 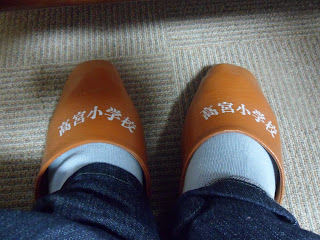 John and I were at Takamiya for a little over 2 hours. The first hour we interacted with 3rd graders, the second hour with 4th graders. With the 3rd graders we did Q&A, sang songs, folded paper airplanes and had flying contests. We sang and played dodge ball with the 4th graders and they performed a couple songs for us, singing and playing recorders. Then we performed for them! We sang "L-O-V-E" by Nat King Cole.

While waiting for each session to start,﻿﻿﻿ we sat in the office of Nishikawa-sensei, who is pretty much the coolest principal ever. 30 years ago he was a jazz pianist and travelled to all kinds of places to perform. He even played some gigs in the US. When he became a teacher he started as a music teacher, worked as a teacher in Brazil for 3 years at some point, and eventually became principal of Takamiya Elementary School. He showed us books of jazz songs that he knows how to play, and he even played piano accompaniment when John and I sang "L-O-V-E". 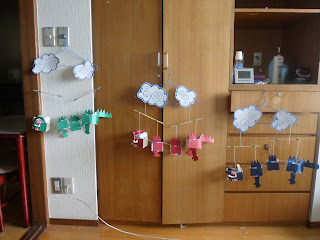 To be honest I was nervous before going to Takamiya. Dealing with children can be hit or miss, and I didn't know what to expect. But they were just normal kids. Very curious, very energetic, a little wild. Kids. And I'm sure they got a kick out of having a tall skinny white dude and a black chick visit them. I got many wide-eyed stares and requests to touch my hair, haha. The students were great and I had a really fun time. The only thing I will say is that today's visit felt a little too rushed, a little to structured. I wish we would've been able to just sit and talk with the students more. But other than that, I have no complaints. Oh, and they sent us off with handmade gifts! 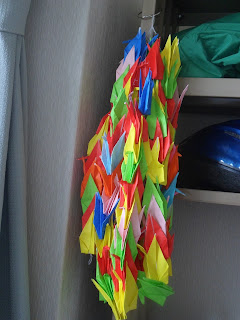 A couple hours after returning from Takamiya I participated in a curry party here at JCMU. The Shiga Daigaku student who was placed in my group is named Eri. You know how sometimes you meet a person and can just feel that they're good people? That's how I felt upon meeting Eri and talking to her for a while. She was just awesome. I hope I get to see her again. And of course, making and eating real curry for the first time was pretty nice too!