Wednesday 6/5: Placement Test
Again, I woke up before 5am. My alarm is set for 6am everyday so I try to sleep until then, but obviously that's not happening yet. And it probably doesn't help that the sun rises around 4:40am everyday here. Anyway, I got up and did my morning routine (Psalm 70; Namaste Yoga 177 "Less Is More"). After some last-minute studying I went to take my placement test and... I placed into the 4th level! You see, here at JCMU four levels of Japanese are taught. Level 1 is beginner, Level 4 is advanced. I just finished 300-level Japanese at school and I certainly didn't come all the way over here to repeat those courses. So logically, my goal was Level 4. The test was really difficult, but fortunately I made it.

After that test and some more formalities I was too exhausted to think so I took a nap. This one ended up lasting 4 hours just like my nap on Tuesday did. I fell asleep around 4:30pm and woke up around 8:30pm. Then I did my homework and prepared for the next day's class and didn't go to bed until 1:15am.

Thursday 6/6 (TODAY!): First day of classes
This time I was able to stay asleep until just after 5am, close but still no cigar. This morning's routine: Psalm 71 and Namaste Yoga 176: "Winning Isn't Everything". Though 3 people placed into Level 4, I was the only one who decided to stay in it. As a result, I was the only student in that class the whole day, 9:10am-2pm. Class schedules at JCMU are organized so that each level of students stays in one classroom all day, and the instructors rotate every hour with intermittent 10-minute breaks and a lunch break. The instructors I had today were really nice and I understood most of what they said, but it was still pretty awkward. I felt like I was in an independent study or some special tutoring session, not a class. Plus, since I haven't been sleeping well or eating properly I wasn't 100% and I sounded like a timid idiot when I spoke. To be honest, I still don't feel completely like myself yet. I guess I just need more time to adjust to all these changes.

There was another important first today: my first weekly Skype date with Ma! Admittedly, I ended up becoming more emotional during our conversation than I'd planned. And even though I don't feel like I said what I wanted to say the way I wanted to say it, it was enough just to see her face and hear her voice. 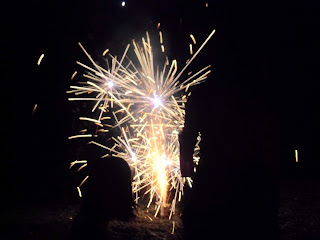 Later this evening, word got around from a Shiga Daigaku student who's closely connected to the
center that there would be fireworks tonight. We all thought that this was part of some important local event, so we gathered in the dorm lobby anticipating great fun. It turns out, "There are going to be fireworks on Lake Biwa" meant "We're going to walk along the lake, find a pebbly space along the shore, and hang out there while we play with sparklers and firecrackers." I stood by and watched because, well, I don't do fire and loud noises (I'm wearing synthetic hair and I scare easily). But it was still great fun standing by, taking pictures, and trying not to get set on fire or eaten by bugs!

And now I'm here, having finally summed up my first few days in Japan. I'm definitely failing in the "take care of yourself" category, but I'm trying to do better. I didn't take a nap today and I finally went back to the grocery store since I'd run out of food, so I'm looking forward to being more energized and feeling more like myself tomorrow after a full night's sleep. 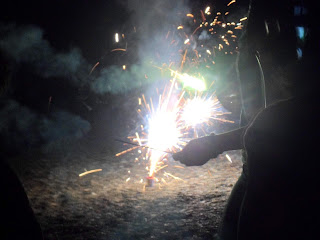 Also, I apologize for not taking more interesting pictures and not making any videos. Usually when I go to a new place I take pictures of everything right away. Random strangers, interesting-looking buildings, streets, clouds, greenery, you name it. But I wanted to take a less frantic approach to capturing this experience, since I'll be here in Hikone for a while. Plus, as you've probably gathered, I haven't been in the right frame of mind to do so adequately. Give me some time to gather my bearings. Maybe I'll actually get outside this dorm and do some exploring this weekend? Hm...