Here are the remaining three of the five dramas that I started in early 2019 and completed just this week (haha). You read part 1, now let's get to part 2! 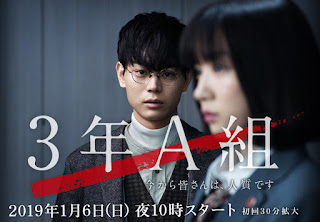 This show, to borrow from Brandon and Justin of the Medium Podcorn movie review podcast, is "cuckoo bananas". It's not a bad show, and it has a really important message about the powerful ills of social media and how people should use their words for good. Suda Masaki even flexes his acting chops in an extended monologue where he's pleading, begging, beseeching the viewers of his livestream to change their ways and recognize how their online comments can have deathly consequences. But I just couldn't get over the glaringly-unaddressed Stockholm syndrome aspect of it all. I mean, come on! Hiiragi threatens to blow the kids up if they don't do what he wants, multiple times! He beats the crap out of a couple of the male students! He stages deaths and makes his students think they're watching their classmates die! He traumatizes those kids, but they all bond during it and learn to become more thoughtful people as a result, so it's for their own good in the end? Nah. There's a point about halfway in the show where the students have the option to escape, but they decide not to, because now they believe in helping Hiiragi uncover the truth of what happened to Reina? Nah, I just can't get with it. I only picked this show because I was curious about how it would play out, and I was interested in seeing Suda Masaki play something more intriguing than the writer-turned-model boyfriend character that I last saw him as in 'Jimi ni Sugoi!' (2016).  If you want an entertaining high school-themed show that keeps you guessing about what's going to happen next and has a smattering of social commentary in it, then '3-nen A-gumi' should be fine. But if you start thinking about things a little too much, you'll ruin it for yourself. 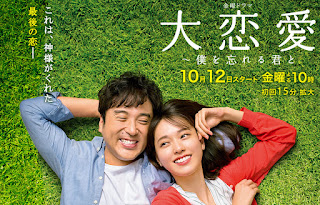 Toda Erika ('REVERSE') sho' nuff knows she can act! My goodness! ...Okay, just had to get that out first. I can't remember exactly why I chose this show. I don't think it was Toda Erika, skilled though she may be. Maybe it was because it seemed similar to 'Boku no Ita Jikan' (2014) or 'Algernon ni Hanataba wo' (2015) in that the main character succumbs to a progressive and incurable disease over time? I don't know. What matters is that this show is brilliant! A number of the latter episodes end in such a way that any one of them would've made a viable final episode for the show. In fact, a lesser show would've ended when Nao and Shinji get married. But not so! 'Dai Renai' leads us through the entire life cycle of their relationship, from the moment they meet in Nao's apartment, to when they reunite and get married, to later on when.... well, you'll have to get to that part on your own. My point is that the way the show actually does end is a heartbreaking but conclusive and fitting finish to a story that was full and complete the whole way through. And how often does that happen, you know? This is a love story that feels genuine but isn't overly sappy, and unlike 'Boku no Ita Jikan', it won't leave you in a complete puddle on the floor. You still might cry though, so have some tissues on deck just in case. 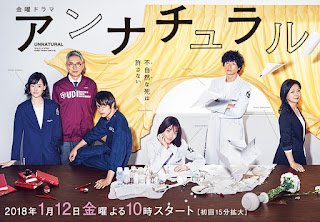 I can't remember why I picked this show either, but it probably boiled down to the fact that Ishihara Satomi ('Takane no Hana') is the lead. As I've mentioned on multiple occasions, she's one of my favorite Japanese actresses, and I'm likely to give any drama she's in a try. And sure, the 'CSI'/murder mystery element of 'Unnatural' is not new. The show 'Galileo' (2007) comes to mind, and though it was a massive hit when it aired in Japan, I wasn't wowed by it when I saw it. But 'Unnatural' kept my attention the whole way through! Maybe it's my Ishihara Satomi bias, maybe it's the fact that I don't watch these types of shows often that makes this one stand out, or maybe this show really is just that good! Whichever it is, I have no complaints. I will say that 'Unnatural' is probably not the best option for people who are uncomfortable seeing body stuff on screen (dead bodies, body parts, blood/other bodily fluids) or violent death scenes. UDI solves many cases, but the show's moreso about how the team works behind the scenes, so if that co-worker or friendship element is of interest to you, then give this show a try.

For my favorite of the bunch this time around, I'm gonna give it to 'Boukyaku no Sachiko', with 'Dai Renai' at a close second. 'Boukyaku' has it all: the heartbreak, the gradual recovery, the food porn, the literary element, the camaraderie, the comedy, the randomness, and most importantly Takahata Mitsuki thoroughly sells it as the titular character. If I were more of a hopeless romantic I probably would choose 'Dai Renai', but again, I stand by my sentiment that that show is brilliant in its own right. Now I'm off to find more J-dramas to watch. Hopefully it won't take me until 2021 to write about them... we'll see!
Posted by Deela (Danielle G.) at 8:16 PM