I'm finally back with a new J-drama review! Pretty soon after posting my last review back in January 2019, I actually started five dramas from 2018 and 2019 that I was really interested in. But it took me a while to watch them all, and I didn't finish the last of them until three days ago. So I guess much of me returning to this blog in 2020 entails picking things up where I left off, and taking the time to not leave things unfinished. For part 1 of this roundup, I'll be writing about the two shows that had shorter episodes than the other ones (about 30 minutes long compared to the typical 45). 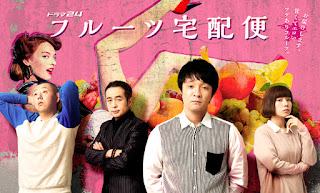 The theme of sex work is what drew me to this show. I was most curious about whether the characters would be portrayed as shameful and dirty, or if they would be given more respect and compassion than that. Thankfully, it's the latter! Though the show has some intense or even bleak moments, it also frequently has a comedic and tender tone. Fruits Takuhaibin seems to be the only sex service in town that treats women more like people than commodities. The staff Sakita works with are kind and caring, the women can refuse to see clients whom they no longer feel comfortable with, and even Misuji (the no-nonsense owner of the company) is somewhat lenient in his approach when firing certain women for breaking the rules. I only have two gripes. First, while things get better for Sakita as he comes to terms with this industry and realizes that helping sex workers feel safe and supported is what he wants to do with is life, nothing really gets significantly better for any of the women. The consistent consolation for pretty much every woman featured in each respective episode is basically, "keep your head up and things will get better for you some day, somehow", which... feels a little hollow. Second, there's a gratuitously violent thing that happens to Emi in the final episode that didn't seem to serve any purpose besides shock value, and I think we could've done without that. But overall, I was pleased with this show. 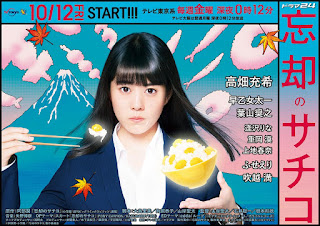 I hadn't realized until after I started watching this show that it was based on a manga of the same name, which makes the show's physical comedy and style of humor make a lot more sense. I also hadn't realized at first that I'd seen the lead actress before: Takahata Mitsuki played the mean girl in 'Mondai no Aru Restaurant' (2015)! She played that role just fine, but I was so incredibly impressed by the cleverness and sense of timing she displays in 'Boukyaku no Sachiko'. Sachiko's kind of awkward and the show's a little wacky—at one point she and another character break into a full-on musical number extolling the virtues of onigiri, and that's just in episode 2. But I couldn't help but become endeared to Sachiko and sympathize with what she's going through. She's intensely serious most of the time (her huge eyes don't blink that often and her lips are often pursed), she's great at her job and is well-respected by her colleagues and clients, and for everything she's got going for her she just can't get over yearning for explanations and a second chance in the face of a major personal disappointment... Hmm. Perhaps I liked Sachiko so much because she is basically me, haha! But that's neither here nor there. This show is shot well, it's funny, and you get to ogle at a variety of dishes and cuisines that are available in Japan. If you enjoyed a similar food-themed show called 'Samurai Gourmet' (2017), and if you remember Herbal Essence's orgasmic shampoo commercials from the 1990s and early 2000s, then you've got Sachiko's food scenes in a nutshell. It's all in good fun!

Make sure to check out part 2 of this J-drama review to read about the other three shows that I watched over the past year, and to find out which one is my favorite of them all!
Posted by Deela (Danielle G.) at 2:53 PM