The winter broadcast season has been underway in Japan for about two weeks now and I'm still scoping out my choices. While I'm still ruminating on what to watch this winter, for now let me briefly share what I watched in the fall. In the order that I finished them: 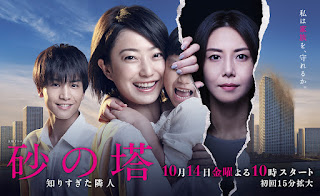 Aki is a housewife whose blended family (her husband, their elementary-aged daughter, and her husband's teenage son from a prior marriage) at first thinks they are lucky to have snagged an apartment in a new 50-floor high-rise tower. But elitism is the rule amongst the other housewives in this building, and the hierarchy is based on which floor you live on. (The higher the level between floors 26-50, the higher social status you're afforded; floors 1-25 aren't even worth mentioning.) Aki just barely makes it into the elite moms club by moving to floor 26 and has a hard time fitting in. Her only "friend" is an elusive flower arrangment artist/teacher, also a member of the moms' group, who's used her creations to sneak surveillance cameras into all the other housewives' apartments. All the while, a serial kidnapping case has the whole neighborhood on edge, as an unknown pied piper casts judgment on local moms by sneaking their kids out from under their noses.

I'd originally been attracted to the moms-as-mean-girls aspect, as it reminded me of the backstabbing ensemble of housewives in 'Namae wo Nakushita Megami' (2011), which I thoroughly enjoyed. That show was more about the secret lives of each woman in the main cast, whereas 'Suna no Tou' focuses more on Aki and her family being out of their depth. Although, there are a number of key secrets that are eventually unearthed! The catty moms in Aki's building and the serial kidnappings are linked, but perhaps not in the way that you'll think they are. 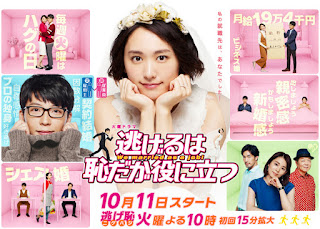 Often abbreviated as "Nigehaji", this manga-based drama was THE primetime hit of the fall broadcast season. I'd tried to sit through the first episode but got bored, so I passed on this show originally. But then I kept seeing Japanese news headlines about it online and saw how huge its ratings were (it ended up averaging 14.5% of the viewership during its timeslot, with the final episode alone earning nearly 21%). Part of the show's popularity is due to its lead actors: Aragaki Yui has been leading dramas for years, and Hoshino Gen's career has been on a new wave since his uplifting hit single, "SUN" was released in 2015. Another part of the popularity is Hoshino Gen's latest hit song, "恋" (Koi/"Love"), which inspired a massive dance craze as the theme song for 'Nigehaji'. The cast is shown performing the choreography at the end of every episode, so you have at least 11 chances to practice along!

In short, the hype made me give the show another chance. Aragaki Yui plays Mikuri, a 20-something who's having trouble finding a full time job despite an advanced psychology degree and years of job-searching. Hoshino Gen plays Hiramasa, an awkward employee at a tech company who keeps to himself. Thanks to Mikuri's parents, she ends up working as Hiramasa's housekeeper, and in time they decide to make a special arrangement. Mikuri becomes Hiramasa's live-in housekeeper, and in exchange Hiramasa lets her live with him and puts her on his insurance. They basically enter into a common-law marriage on paper in which Mikuri gets paid for doing what housewives throughout Japan have to do for free, but she and Hiramasa maintain an employee-employer relationship. But as Mikuri endeavors to ease her loneliness and Hiramasa's shyness, the nature of their relationship shifts. It's not the most eventful drama, but it does take an introspective look at both conventional and non-conventional relationships. Plus it's lighthearted and utilizes pop culture parodies to make it more humorous. Other pluses include Hiramasa's nosy co-workers, Mikuri's aunt, and an out gay couple (not fully revealed until the end). 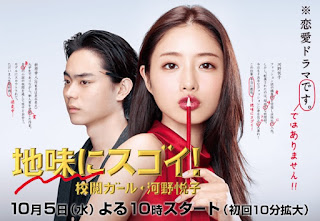 I suppose when it comes to dramas, I'll follow Ishihara Satomi wherever she goes. What can I say? I'm a fan! In this one she plays the titular Etsuko, an aspiring fashion writer who scores a job working for the company that publishes her favorite fashion magazine, Lassy. Only instead of being hired as a fashion writer, she's hired to work in the basement with a team of proofreaders who thoroughly (and manually) scan and edit all of the company's publications. It's the opposite of what she wants but it seems to be kismet. For starters, the first syllables of her last and first name match the name of the department (kouetsu). Not only that, but she's excellent at proofreading! She not only checks for grammar and spelling errors, but she goes on excursions outside the office to verify place names and plot points. Sometimes she even seeks the authors out directly to suggest changes. Don't let the cute outfits and over-the-top personality fool you! Kouno Etsuko is no airhead; she's actually quite thorough!

This workplace drama is also not extremely eventful but it is fun to watch. The show acknowledges each and everyone one of Etsuko's outfits between scenes, and she seems to charm every character who encounters her and her ideas. This especially includes Yukito (Suda Masaki), a best-selling novelist and an emerging model at Lassy (he initially hides his identity from the public in both respects). He's also Etsuko's boyfriend, but their relationship evolves slowly due to busy schedules and misunderstandings about each other's intentions. Also charmed is Etsuko's former schoolmate Morio (Honda Tsubasa from 'Koinaka') who has Etsuko's dream job but hasn't found her stride yet. If you like fashion, dramas set in the publishing industry, and/or Ishihara Satomi, then 'Jimi ni Sugoi' has just enough going on for you to keep watching. There's also an adorable gay couple in this show as well.

'Nigehaji' is too obvious of a choice, 'Jimi ni Sugoi' has something missing, and coming off of the high intensity of 'Suna no Tou', I was entertained but still slightly underwhelmed by both. So this season's favorite is 'Suna no Tou' for me. They're definitely all worth watching, though!
Posted by Deela (Danielle G.) at 9:04 PM