BOOKS! (The Martyred + The Book Borrower)

Historical fiction doesn't typically float my boat, but I recently finished two considerably mournful novels that fall into the category in their own way. First is a war novel that I found at a bargain bookstore. Second is a gift from the neighborhood Little Free Library.


The Martyred  by Richard E. Kim 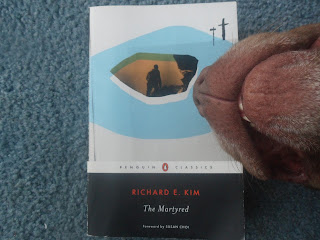 This is another classic that I'd been oblivious to until now. Apparently this book was a bestselling hit when it was originally published in 1964, and its author is known as the trailblazer in Korean-American literature... and unfortunately for me, I'd never heard of either.

The Martyred is set in Pyongyang in the early phases of the Korean War, at a time when the city has changed hands and is under South Korean control. Captain Lee, a professor who became an intelligence officer after joining the army, narrates the story. His commanding officer, Colonel Chang, orders Lee to investigate the recent abduction of 14 Christian ministers from Pyongyang: 12 of them were executed, and of the two survivors only one, Mr. Shin, is mentally sound enough to give a statement. But while Lee is in search of the truth, what Chang seeks is fodder for anti-Communist propaganda that will boost  morale and tarnish the North Korean cause. Through gaining Mr. Shin's confidence, Lee eventually learns that Mr. Shin has been lying about what really happened to the 12 "martyrs", supposedly guarding he truth for the good of Pyongyang's vulnerable civilians including the Christian community. Lee's best friend Park also has a stake in what happened, since his father was one of the 12. Though his father had previously disowned him for being an atheist, Park remains curious despite himself to know about his father's final moments.

The novel considers a number of deeply complex issues, and doesn't intend to solve any of them. You have the church co-opted by the state, as Colonel Chang ingratiates himself with local Christian leaders solely for their social capital (Christianity was an almost trendy phenomena among answer-starved Koreans at the time). And then you have the value of truth, whatever that happens to be. Are there occasions when people would be better off not knowing the truth about something, even if they demand it? When have people suffered enough, and who decides this? When faced with their human frailty, often people become desperate to have something to believe in, to have some assurance that there's meaning to their suffering. At the same time, others may conclude that there's no such meaning to be found. The Martyred offers no simple answers, but acknowledges that in times of peril, the appeal of belief systems can both sprout anew and wither away. In this way it's somewhat reminiscent of Floating Clouds (Ukigumo) by Fumiko Hayashi, which I would also recommend.


"Do you know I wished my father hadn't been a martyr? I wanted him to have failed at the last moment. I hoped he had been defeated, yes, crushed, so he would know what it was like to be weak in spirit. What it was like to doubt―to doubt his god, his faith, everything―to taste the horrible injustice and suffering of this life... I can't weep for him. I could have if he had failed. I could have wept for him if he had experienced at least a moment of human weakness. That's why I sometimes weep for Christ" (97).

"Or, would you rather tell them this war is just like any other bloody war in the stinking history of idiotic mankind, that it is nothing but the sickening result of a blind struggle for power among the beastly states, among the rotten politicians and so on, that thousands of people have died and more will die in this stupid war, for nothing, for absolutely nothing, because they are just innocent victims, helpless pawns in the arena of cold-blooded, calculating international power politics? Well, now?" (107).

The Book Borrower by Alice Mattison 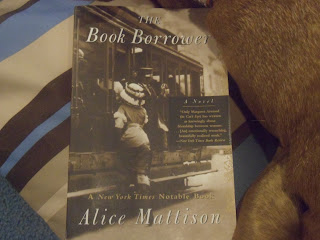 The ratings for this book aren't great. Look at Goodreads or any major online retailer that sell books, and you'll see that it averages 3 stars at most. But I quite enjoyed it! It's  about two decades of friendship between two women who meet at a park (presumably somewhere on the East Coast) in 1975. Deborah, the more social and laid-back of the two, was given a book titled Trolley Girl by her streetcar hobbyist husband but instead passes it off to Ruben, the more serious and strait-laced of the two. The borrowed book is a semi-biographical account of the involvement of a young Jewish anarchist woman in a 1920 labor strike that turned deadly.

The Book Borrower is nearly 280 pages long but only has five chapters. Each one ends with an event that would understandably end the pair's friendship or drastically alter their perceptions of each other (for example, Ruben gets Deborah fired twice). And yet time goes on, their respective families grow, and their friendship persists. We're not privy to how they patch things up in between each potential rupture, as each chapter picks up months or even years from where the previous one had left off. But somehow this adds to the intimacy of their friendship; their bond is something that even they can't fully comprehend or articulate. Perhaps it isn't so surprising, then, that when Trolley Girl's author enters Ruben's life and causes her to re-visit the book, Ruben can't help but question whether what she knew of Deborah was only a shadow of who her best friend really was.

From the first page, the novel repeatedly switches between Ruben and Deborah in the present and the text of Trolley Girl as Ruben reads it. So you have this book-within-a-book thing going on at first which isn't explained and isn't smoothly transitioned (Mattison probably chose not to make it easy for the reader), so I suspect that a lot of people were thrown off by the confusion. But if you can stick it out and enjoy reading about the more substantive aspects of female friendship, you might like The Book Borrower more than you'd expect.


"Public transportation is a big womb. We are carried. We do not drive ourselves. The engineer takes care of us. That's why stories and songs about trolleys and trains are cute. But if something goes wrong on public transportation, it's much worse than anyplace else. Why is crime on subways so scary? Because trains are our mother. Somebody holds up the train, he's killing our mother. Think about it" (104).

"People had said to her, Now Deborah will always be with you: meaning, apparently, that Ruben could pretend to talk to Deborah and pretend to hear her answers. But when she did that, she had at her disposal only her memory of what Deborah had said in the past. If Deborah were alive, she would not say exactly what Ruben imagined she might say. She never had" (230).