Rather than buying any new books during the first half of this year, I'm attempting to power through as many of my to-be-read books as possible so I can stop putting them off and feeling stressed about all the reads I have piling up. So let's cut to the chase!

Mo' Meta Blues: The World According to Questlove by Ahmir "Questlove" Thompson 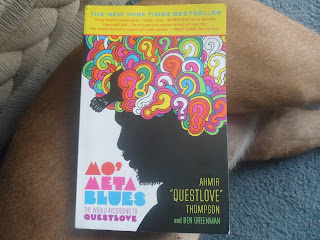 This is one of the last books I bought when I worked at a bookstore after graduating from college. I'm not knowledgeable enough of The Roots' discography to call myself a proper fan, but I've always had  great respect for this hip-hop band and its highly-recognizable drummer, ?uestlove (Questlove). He's branched out to producing, music directing, DJ-ing and then some, but drumming is where it started for this artist from Philly.

Obviously this is Questlove's memoir, but he is insistent that it not be a typical one, and that his voice not be the only one featured. Mainly you have him telling most of story with Rich Nichols (the Roots' longtime manager) adding his commentary in dialogue or footnotes. Intermittently and to a lesser extent, you then have cowriter Ben Greenman and editor Ben Greenberg exchanging emails about the strategies and process for the book as it's coming together. And then throughout the book you have all the people whom Questlove acknowledges and quotes along the way. His story is about phenomena much greater than him, including hip-hop, musical genres, artistic movements/communities, "the industry", The Roots' career trajectory, and what shapes an artist's character. So for him, making Mo Meta' Blues solely about himself would have been predictable and inaccurate.

Each chapter begins with a question which Questlove attempts to answer, and each chapter is also peppered with stellar music recommendations ranging from popular to obscure. I wrote down every song and album down as I read, and now have eight and half wide-ruled pages full of listening homework for the next few months. Early on he gives us a beautifully brilliant summary of music (especially black music) history from African drums to do-woop, and then most of the book offers an extended tour through the '70s/'80s/'90s music that formulated Questlove's world at those times. As a professional working musician he also interrogates the influences of art and commerce on each other, and shifts between storytelling and intellectual inquiry quite frequently. I approached this book looking to learn from one of the modern masters, and that I did. Take advantage of this opportunity to do the same, whether you're a music nerd or not into music at all!


"In general, I don't like to blame the creators. They are making work that appeals to them and the people in the room with them. They are making something that is, at some level, genuine... The younger me may have sat up all night with bandmates raging against Puffy or DMX or whoever, but the fact is that they were never the problem. The problem was that someone in the corporate chain of command felt that there was a need to play those songs fourteen times a day and to eliminate alternatives" (152-153).

"They go back to the beginning of recorded music, where the first break was made between performer and performed. They go back to the thin that's at the root of both Dilla and the Roots and every other inspired composition in any and every genre: it's the music in your head. That's the seed at the beginning of every artwork. How do you take what you hear and translate it to something that can be heard?" (230).


God Is Not Mad At You by Joyce Meyer 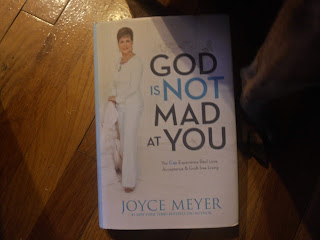 Perhaps it's a sign of maturity or progress that I didn't find this book as interesting as I did when I originally attempted to read it four or five years ago? Perhaps I am not so needy now as I was as a college freshman or sophomore? I'd originally bought this book on the NOOK that my aunt gave me as a high school graduation present, but it turns out that my ability to focus wanes considerably when using e-readers! So I made a dent in the book but didn't get far. Two years ago I erased my library and stopped using the device, and wasn't concerned about reading this book anymore. But then a few months ago I happened upon the hardcover among the bargain items in the foyer of a Barnes & Noble, and I figured it was a sign that I should give it another try. Plus it was cheap, so why not? This time around, rather than seeking reassurance or answers I merely read it to see what Joyce Meyer had to say on the topic. And to be able to say that I'd FINALLY finished it.

She basically makes the case for God as ultimately loving and benevolent, and encourages people not to load themselves with unnecessary burdens (guilt for things that aren't your fault, absurdly high or stringent expectations, baggage from the past, etc). It's pretty standard self-help fare except for the last eight chapters where she delves more deeply into Scripture. In the final chapter she briefly discusses spiritual maturity when comparing the "milk" (all the positive stuff that people love to latch onto) to the "meat" (the personal sacrifices we have to make to actually grow and do things in line with our calling) of the Christian faith-walk. I would've liked to read more on that, but I guess that's in another book for another day. I wouldn't necessarily tell people not to read this book, but I probably wouldn't read it again. If you find yourself in a particularly low place at the moment, reading God Is Not Mad At You probably wouldn't hurt, but once is more than enough.


"Never apologize for being the person you are. That would be like an apple tree apologizing for not being a banana tree. If you're an apple tree, then produce apples; if you're a banana tree, then produce bananas! It takes all kinds of fruit to make a fruit salad... When each of us becomes the best we can at being ourselves, then God's purpose can be fulfilled" (134).

"God will never love you any more than He does at this moment in time, because His love is perfect at all times and is not based on anything that we do or don't do... Can you stand to be that blessed for no reason at all except that God is good?" (163).