BOOKS! (Seven Guitars + The Wangs vs. the World) 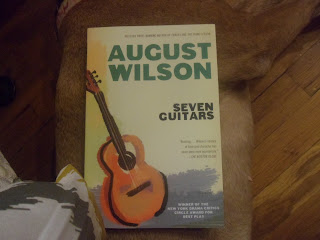 Five friends gather after the funeral of their fellow, a guitarist and singer named Floyd "Schoolboy" Barton, and through them the audience observes the last week of Floyd's life. Though often chummy and jovial when they interact with each other, nearly all members of this friend group are desperate to finally obtain something that won't be taken away from them. After a three-month stint in jail, Floyd is determined to scrap together the money to get himself to Chicago, where a potential record deal and the chance to no longer be poor await him. Vera, his on-again-off-again girlfriend, wants a love that's true and won't have her worrying about not being enough for her partner. Hedley, Vera's neighbor, wants to be a "big man", someone respected and important. Certain that black people are royal and righteous, he wants the inheritance that he believes he's owed (that by extension all black people are owed), which was supposedly passed from his father but has been held up by the interfering power of white people. Canewell, Floyd's friend and harmonica player, has unrequited love for Vera and wants to be respected as a musician, being properly paid for his talent and credited for his tactical ideas. Louise, Vera and Hedley's landlord, wants to stop being inconvenienced by other people's troubles, including those of her niece Ruby, who wants to be treated with care rather than as an object of rivalry or sex.

Only Hedley (and presumably Ruby) gets what he desperately desires, but at an unfathomable cost that none of his friends know about. Seven Guitars utilizes the rooster as an ominous metaphor for the black men, which sailed right over my head until after I read up on the play upon finishing it. It keeps people alert and they rely on it to maintain the daily pace and function of their lives, but people don't appreciate its true value, and instead mercilessly execute it for being a perceived nuisance. I've heard of lions, tigers, and panthers used to exemplify the virtues of black people (especially black men), but roosters are a new one that I'm still mulling over even as I write. This play is set in between the ghosts and autonomy-through-access dreams of The Piano Lesson (the 1930s), and the woes of black manhood and womanhood in Fences (the 1950s). As a tale of friendship and almost-stardom, Seven Guitars echoes the themes of both works.


"'If you have to say hello before you can say goodbye I ain't never got to worry about nobody saying goodbye to me no more.' I ain't never going through one of them goodbyes again... What I'm trying to tell you is, don't let no man use you up and then talk about he gotta go. Shoot him first" (31-32).

The Wangs vs. the World by Jade Chang 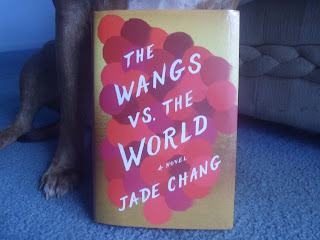 When Charles Wang established a long-running makeup empire after trading exile in Taiwan for a shot at luck in the States, he probably never imagined having to drive his family and all their possessions across the country before returning to China for the first time in decades. But after taking a risk that costs him everything at the top of the 2008 recession, that's exactly where he finds himself. Ever determined to create the next opportunity where there is none, Charles departs from his Beverly Hills home with plans to reunite his family on the East Coast, and then go to China to reclaim his ancestral lands and potentially build another fortune there. Along for the ride are his spoiled fashion-blogging daughter Grace, his goodhearted college-aged son Andrew, and his childhood friend turned second wife, Barbra. Waiting for them is his oldest daughter, Sina, a successful modern artist taking refuge in the Catskills after a controversy nearly ended her career.

Charles Wang's is a Death of a Salesman-esque commitment to a pipe dream, a dogged faith in one last sure bet that will make everything alright. Unlike Willy Lohman, however, once in Beijing Charles is able to find triumphant gratitude in the fact that he took all his chances in life and that, at one extended point in time, he'd made it. Sadly I didn't enjoy this novel as much as I'd expected to given the enthusiastic reviews I heard;  it wanders to too many unnecessary places and its loose ends are slightly unfulfilling. Nonetheless it's still a fun read to pass the time, a breather with succinct summations of Chinese 20th century history, the 2008 financial crisis, the art world, and first and second generation experiences of Chinese-American immigrants. The Wangs vs. The World may not have blown me away, but it's still a delight of a debut novel. Support Asian women writers and give this book a try!


"Makeup was American, and Charles understood makeup. It was artifice, and it was honesty. it was science and it was psychology and it was fashion; but more than that, it was about feeling wealthy. Not money―wealth. The endless possibility of it and the cozy sureness of it... Artifice, thought Charles, was the real honesty. Confessing your desire to change, being willing to strive, those were things that made sense. The fakers were the ones who denied those true impulses" (6).