Coincidentally, both of the dramas that I was most interested in watching this spring broadcast season focus on men trying their hardest to figure out who they are, while also striving to remake themselves in the process. In one show, a man has a once-in-a-lifetime opportunity to increase his mental capacities and become the man he's always wanted to be. In the other, a man loses his memory and fights everyday to remember who he used to be and redeem himself of his old selfish and trifling ways. 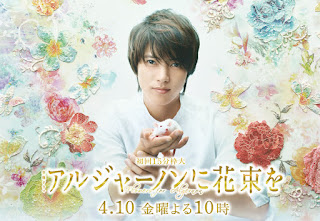 This is one of many adaptations that have been produced around the world since the original short story was first written by Daniel Keyes in 1958, and  then published as a novel in 1966. The main storyline  features a young mentally challenged man who receives an operation that "makes hims smart" and "just like everyone else" thanks to experimentation conducted on a lab rat named Algernon. In this version, title character Sakuto (played heartthrob idol Yamashita Tomohisa) works for a flower delivery company that usually employs wayward youth. During a delivery, Sakuto crosses paths with neurological researcher Haruka (Kuriyama Chiaki), who works as part of a lab team that has been using a rat named Algernon to test the brain capacity-enhancing drug ALG. Sakuto is selected as the first human guinea pig recipient of this drug, which eventually transforms him into a genius and also allows him to develop the emotional capacities of an adult his age. Sakuto and Haruka gradually fall in love, and Sakuto is able to mend things with his friends after at first spurning them for being beneath his intellectual level. However, just when everything seems to be going well, Algernon starts acting erratic and his mental prowess regresses to its original state, causing concern and dread for Sakuto about if/when the same thing will  happen to him.

This drama obviously goes straight for "the feels", as it emphasizes how impressionable, lonely, desperate, and taken-advantage-of Sakuto is during the first half of the show's run before his transformation. Plus, rather than commissioning an original theme song from a current artist in the Japanese music industry, they chose Bette Midler's "The Rose", intermittently playing parts of her recording and a new orchestral version of the song during each episode to swell the heart strings and make you cry. They almost, just almost, got me at the end of episode 2, but I stayed strong. I could take or leave Yamashita Tomohisa's acting post-transformation, but I do appreciate his playing a mentally challenged man with dignity. It was also great to see him and the versatile Kubota Masataka reunited after co-starring in 2013's 'SUMMER NUDE'. All in all, 'Algernon ni Hanataba wo' isn't spectacular. It holds out that carrot for a hopeful ending a little too long, then snatches it away, while still rushing during the final episode to tie too many loose ends together. But it stays pretty true to the original story, and for that alone it's worth watching. 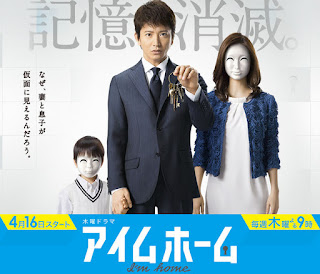 This is my second Kimura Takuya drama, but for this one I was genuinely interested in the show's concept rather than swayed by the hype. In it, Hisashi (Takuya) is a salaryman who cannot remember the past 5 years of his life following a serious accident at a work site. The two recurring symbolic items that help trigger his memory are  masks and keys. Hisashi holds onto a ring of keys that he's had since before the accident, which he uses to unlock (literally) doors to various rooms, buildings, and other spaces that play a role in his past and help him unlock (figuratively) his memory. Masks, for their part, have to do with the fact that upon returning home from the hospital, he can no longer recognize the faces of his wife and young son because they're both wearing masks. (Only he can see these masks, of course.) So each episode basically shows him delving deeper into his past and uncovering secrets not only about himself but also the people closest to him.

What I find most compelling about this drama is that while the lost memory premise is not new, Hisashi goes to great lengths to right his wrongs after having been quite the dastardly specimen. Like, he's genuinely and consistently invested in being a good person, becoming a better father and husband, and responding to whatever needs his family expresses. And for him this family includes his ex-wife and her daughter, who Hisashi adopted. Often in dramas they'll show a divorced man (or a man who's had an affair) and mention that he has two families, but he's always left his first family (or his "illegitimate" family) by the wayside, as if they never happened and aren't his responsibility. But Hisashi doesn't take that easy way out. Plus, he happens to be the best cook out of all the male and female characters on the show (not sure why this was chosen as such an important feature, but we see him cooking a delicious and often intricate meal in every episode), which is something that traditionally falls under "woman/wifely duties". So props to Kimura Takuya for taking on this character that both implicitly and explicitly challenges the traditional roles of Japanese men and fathers. This is one idol-turned-actor whose performances I can wholeheartedly get behind.

I would recommend both of these shows, but the winner this round is 'I'M HOME' hands down. Kimura Takuya really impressed me with the depth of his performance, and when his character realizes how much of a rider his wife is and crawls to her in the last episode? One of the most moving and beauifully-shot TV scenes I've seen in years.
Posted by Deela (Danielle G.) at 7:46 PM