Another day with not much to write about, but I'll give y'all the rundown anyway. FYI my feet and ankles are still swollen from when we first arrived (sneakers starting to feel snug...), but that's neither here nor there. 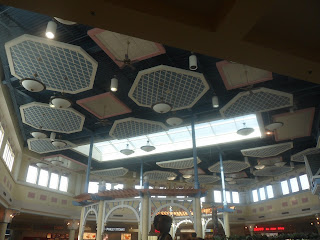 Nay had to go back to work today, and after we dropped her off we went to that same blasted Arbor Place Mall we went to on Monday so my cousins could return a few things. I bought a couple pairs of earrings, had a really good Oh Kale! smoothie from a shop named Freshëns, and called Ma to rant while waiting for my cousins to be ready to go. While I was on the phone with her I told her that I would try to harken back to what I'd originally said before embarking on this trip. And that was that while this trip probably wouldn't be my ideal travel experience, and though I'd  probably have moments where I was annoyed and bored and wanted to go home (as I do with all group trips)−having the opportunity to spend this time with my cousins whom I haven't seen since New Year's Day would make it all worth it. But meh.... now I'm not so sure. I can be bored at home. I can be bored, AND get paid, AND not have to spend all day sitting on my behind, going to basic places, and listening to chicks arguing about inconsequential mess at. home. 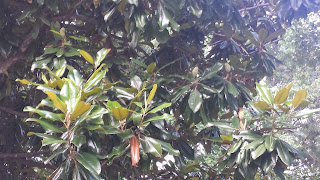 Needless to say, when we returned to the house I had to go on yet another walk to blow off some steam. As soon as my kin sat down for the NBA draft to see where Louisville native D'Angelo Russell would be heading, I was out the door. At least it wasn't 95 degrees and no stray canines tried to follow me this time. And I got to admire quite a few stunningly interesting trees along the way, so that was nice.

Oh and speaking of arguing! Some time after I'd returned from my walk, we were all still sitting around the TV when two of my cousins got into a shouting match. Calling each other out their names, throwing low blows left and right, and all of it over literally nothing. (Well of course, when people fight over nothing there's always something real that lies beneath the nothing. But all I know is that I don't care and I'm not in it.) Chris stepped in and tried to regulate, but by then Cousin A had stomped off into another room, Cousin B had walked out of the house, and it was over.  Disrespecting a host's house and fighting with family is something I don't do, and I just hope these two girls can find a way to get along. Relatives aren't supposed to treat each other like that, and it creates such a stressful environment for everyone when all folks had wanted to do in the first place was have a good time together. 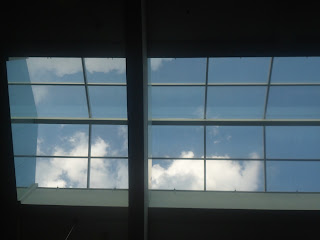 BUT! Just like yesterday, there was a bright spot to today. A couple of things were brought up during the fight that I hadn't had any clue about, and fortunately for me my cousin Neesh was willing to open up and discuss them with me as we went to pick Nay up from work late at night. Thanks to her I'm more aware of some struggles my cousins have been going through. I understand now that my cousins may not have the money or morale to explore like I would normally like to, but they put their lives on hold and contributed their presence to this trip, and that speaks volumes about their character and commitment to family.

Welp. All this negative energy makes me want to tune into Another Round and do something with my hands, so off to stress cleaning the kitchen I go! Forget 'Iyanla, Fix My Life'. We need 'Jesus, Fix Our Family'. Quite a few people in this house are going to bed with sharp tongues, high tempers, sore egos and wounded hearts tonight. Prayers up.