After having attended the "summer jazz week" program as an alto sax-playing high school sophomore back in 2009, and after my conversation with Tiffany Toriumi back in April, I decided to give the Metro Detroit Jazz Workshop another try. But this time, as my true self, a vocalist. Using my true instrument, my voice.

The rundown of the week-long workshop is the same every year. Classes and practice for eight hours everyday Monday through Friday, and a performance during the weekend for everyone to show what they've learned. For MDJW 2015 the performances are this Sunday, but yours truly has been scheduled to work that day. So I'd resigned myself and was content to just come in, take what I could get from the program, learn as much as I could, and just not perform. But then I sang a certain song during the vocal jazz workshop on Tuesday, and one of our instructors, the estimed and gracious NYC jazz singer Susan Tobocman, insisted that I come sing at her Thursday night gig at Cadieux Cafe instead. Another student was in the same predicament as me, so there'd be at least two of us students singing there that night.

Cut to last night. I sang that same song I've been working on all week, which also happens to be the first jazz song I remember listening to on purpose, and the first jazz song I ever learned to sing. Written by Gershwin, polished by the queen of jazz Ella Fitzgerald, interpreted by me on this occasion:

After I came off the stage, I got such a warm response that I hadn't even expected. It was late, I was tired and nervous, and I'd just wanted to go up there and sing the song straight and not suck (stay awake, remember the lyrics, not hit any wonky notes). But it seems that people really liked my performance. The one grown black man in the house, who was also Susan's photographer and photographs tons of jazz gigs and artists in the Detroit Metro area, came up to me and told me, "You got some chops." (This meant a lot to me because anyone who knows my people knows that we produce excellent artists, and we are not easily impressed by performers of any sort.) Then I walked toward Ma's table, and this woman─who's incredibly loving but not the most expressive in the world─got up and met me halfway with a big goofy grin on her face and her arms outstretched for a hug. I was able to give her a moment of happiness, and that was the best part. But then, Susan came up to me too a little later on. She had some words of encouragement that really touched me, "You know, I'm not a very religious person, but I do believe that God gives each of us gifts. And our responsibility is that when we have a gift, we have to share it. You have to do this [keep singing and pursue it]. You have a gift." Sounded very similar to something Tiffany Toriumi had said to me when I met her.

I mention these particular exchanges not to boast, but to record these moments and so that I may be able to look back on them and feel a similar sense of validation as what I'm feeling now. 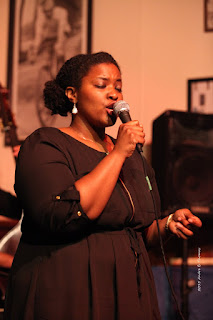 Wow. Man, was last night awesome! I just went up to sing my one little song, but the folks at Cadieux were overwhelmingly kind and gracious. Many thank-yous are in order! Thanks to Susan Tobocman for letting me sing at her gig and saying such kind and encouraging words to me; thanks to Scott Gwinnell for organizing the Metro Detroit Jazz Workshop to give students like me a space to learn and develop; thanks to Tiffany Toriumi for inspiring me to try singing jazz in the first place; thanks to Andre Thomas for the photos (see HERE) and for the advice about building rapport with photographers and how to perform when one is present; thanks to Ms. Yvette for showing support; thanks to Renee K. for being there as well, without you working with me all those times in high school I probably wouldn't still be singing today; thanks to Ma for also being there, without whom I REALLY wouldn't be singing because I wouldn't exist, haha. And big ups to Susan, Scott, and everyone else who went up there and made music happen tonight! Everybody showed out! Many thanks and blessings to all of you for sharing your art. Oh and thanks to everybody who wished me luck!

Last night was kind of my big hurrah. I haven't performed since around April, and I don't know when I'll perform again after last night. But I'm glad I had the opportunity to sing amongst some extraordinary jazz musicians and be considered one of them. I'm eternally grateful.
Posted by Deela (Danielle G.) at 9:26 AM

Email ThisBlogThis!Share to TwitterShare to FacebookShare to Pinterest
Labels: First of February/FoF