This book is bizarre, to say the least. I had to read Abe Kobo's Woman in the Dunes for my Japanese lit class last semester, and I bought it from a seller on Amazon who threw in The Box Man for free. Before even thinking about picking up this novel, I think it's wise to read Woman in the Dunes beforehand to get a feel for Kobo's writing style and pervading themes. Because at least then you'll be primed with the knowledge that you can't go into an Abe Kobo book expecting to understand all of it or have it clearly laid out for you. And that way, when you finally do crack open The Box Man, you'll have been mentally prepared for the challenge that awaits.

The Box Man by Abe Kobo 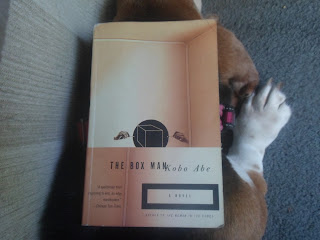 The premise at first has the narrator, who identifies himself as a box man, describing the phenomena of people such as himself choosing to reject their quotidian lives to live as vagrants, roaming around with boxes over their heads and bodies that they've outfitted to be their new homes. What we are reading are presumably the notes he scribbles all over the inside of his box, keeping a record of his daily life and the observations he makes of the outside world. He claims to have been a photographer before becoming a box man, so he is very much preoccupied with images, imagination, and perceptions of reality. And as a box man, he can't help but pontificate on the precariousness of identity and loneliness. The main story involves him randomly getting shot while walking up a road, and after having reached a small local hospital he becomes obsessed with the doctor and nurse who run the place. He's infatuated with the exhibitionist nurse and lusts after seeing and touching her body, he's convinced that the doctor shot him in order to take his box and become a "fake" box man, and he suspects that the doctor and nurse are conspiring against him.

But then it all changes from there. Narrators switch, random photos and newspaper clippings are inserted here and there, events happen that appear to be dreams but may not be, it's all a cluster of whatishappeningrightnow. There are between one and eight characters in the novel in its entirety, depending on who's narrating which part and whether you believe that that character is who they say they are (whether you believe they actually exist in the novel). The city of Tokyo, some overpass on the outskirts of the city, a hospital also on the outskirts of the city, and a couple other imaginary or non-imaginary places make up the setting. Strange monologues and dialogues occur where you're not always sure who is speaking, and it's like so many things are happening and yet nothing is happening at once. Even the connections between characters are put into question.

Now, as far as the concept of a box man goes, I kind of get it. Living with a box over your head represents the desire to be anonymous, even when surrounded by tons of people on a daily basis. But anonymity and invisibility make for a mixed bag of consequences. On the one hand, you're isolated from everyone, don't have real (much less stable) relationships, and frankly, you don't live in the real world but rather the world you create in your head. But! No one has access to you or knows you unless you will it, and if no one can reach you, that means (theoretically) no one can do you harm. It's like you want to be part of the world and have unmitigated freedom to wander and spy on all its goings on, but you don't want to be so involved in it that you can't retreat and hide whenever you need too. This is quite a fascinating scenario that Kobo has come up with.

The biggest question is, though, is any of this real? Two characters point out that the story exists only because of the notes that are taken by any one character at a time, which means the events could have actually happened or they could just as well be a figment of the narrator/notetaker's imagination. Basically this novel is one huge troll, which you'll likely be tempted to give up on, as I was. But it's also an educative example of how unstable narrators in a novel can be made to be, and how sometimes as readers we're called on to participate and be discerning rather than just consume the story at face value. Sometimes we're called on to decide if what we're reading is believable or even real in the context of the story. I thought Murakami's stuff was mind-bending, but this book really messes with your head. By far, Abe Kobo takes the absurdist, surrealist, fantastical, mysterious, existentialist, brain-bending cake. Still, as much of a challenge as this book might be, I encourage anyone who's up for it to read The Box Man at least once, just to see how your particular gears will turn when faced with a book that consistently and purposefully refuses you the comfort of having things make immediate sense. Have fun. May the comprehension odds be ever in your favor.


"That the act of spying on someone else is generally looked upon with scorn is because, I suppose, one does not want to be on the side of being seen... Anybody would rather look than be looked at. The fact that they keep on and on selling endless instruments for "looking"─radios and televisions─is excellent proof that ninety-nine percent of men are aware of their own unsightliness" (86).

"When he realized that there was no reason to fear anyone's looking back at him... Every detail of the scene was pervaded by a soft but penetrating light, and everything that struck the eye was velvety smooth and graceful... The world was filled with a softness as of an early Saturday evening that would go on forever... Just by looking at it, the world was happy for him. In his imagination he put his signature to a peace treaty between himself and the world" (150-1).