Egg in a Hole

I took a stab at this on the fly while I was stressed out in Georgia, and it was a mess. I used two slices of bread (not really necessary), toasted them before putting them in the pan (mistake number one), which led me to overestimate the cooking time and burn the bread and scorch the pan while waiting for the egg to cook sufficiently (mistake number two). 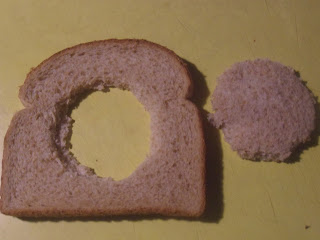 So today I decided to make it again, but do it right this time. As non-conventional as it looks, "Egg in a Hole" (or "Egg in a Basket"), is incredibly easy and simple to make. You can use any fixings you like, but at the bottom line all you need is a slice of bread, a tablespoon of butter, and an egg. Heat the skillet and place the butter in it so it can melt all the way. In the meantime, take any round surface, place it on the bread, and cut around its edge with a knife. (I imagine that if you had specially shaped cookie-cutters at your disposal, using one of those would make the hole look super cute! But I don't have any so I just used the bottom of a plastic solo cup.) 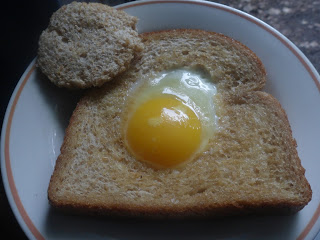 Once the pan has heated sufficiently, place the slice of bread on it and flip it so it can toast a little bit on both sides. When it's to your satisfaction, crack the egg into the hole and let it cook. A minute or so into cooking I covered the pan for a couple minutes just to help the top of the egg cook a little more, but that won't be altogether necessary depending on how you want the consistency of your egg to turn out. Once the egg has cooked to your satisfaction, plate it, and done! Use the round cut-out for sopping up the yolk while you eat. Like I said, this breakfast/brunch/anytime dish is simple and easy. Go ahead and give it a try!