Summer is almost over, I've got my summer Jdrama selections lined up, but I'm just now finishing my shows that aired in the spring. What else is new? Here are the two shows that I watched with English subtitles from spring 2017: 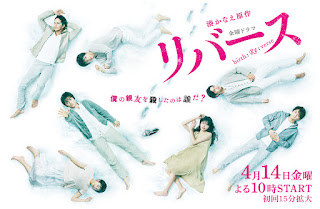 I picked this show simply because Che'Nelle sang its theme song, "Destiny". I'm more a fan of her journey as a non-Japanese entertainer in the Japanese music industry than a fan of her music, but she is one of the more gifted vocalists in that scene. But I digress.

At the center of 'REVERSE' is Fukase, a man who graduated from a prestigious university 10 years ago but doesn't lead a very prestigious life. His best and only friend during his college days was a guy named Hirosawa. During their senior year, Fukase, Hirosawa, and three of Hirosawa's friends went on a snowboarding trip that ended in Hirosawa's death. Though it's unclear who was directly responsible, the four remaining friends know that it wasn't a simple accident but don't discuss it for fear of incriminating themselves. All seems to be forgotten until ten years later (the present), when Fukase and the other three start receiving ominous letters and realize that their lives and reputations are being tampered with. Someone hasn't forgotten about Hirosawa, and they're determined to punish his friends until the truth comes out.

There's a coffee motif that seems innocuous; making coffee is Fukase's hobby, and numerous scenes take place at a cafe which he frequents and is also where he meets his girlfriend Mihoko. But coffee also ends up being integral to figuring out the whodunnit. For a stretch, the mystery of how Hirosawa died takes a slight backseat to the mystery of who's been stalking and threatening his friends, but the reveals for both are quite satisfying. I was shocked not once, but twice.

I enjoyed the show way more than I'd expected to, and I was especially impressed by Toda Erika's performance as Mihoko. I saw her in 'Taisetsu na Koto ga Subete Kimi wa Oshiete Kureta' (2011) a long time ago and apparently she was in 'Summer Nude' as well, but I wasn't aware of her as an actress then. Hers was the most multi-faceted character in the show. Also shoutout to actress YOU ('Going My Home', 'Mondai no Aru Restaurant') who plays the owner of Fukase's favorite cafe. 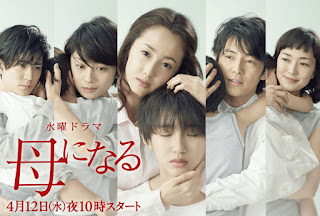 This show was a bit of a 'FIRST CLASS' reunion, which is why I watched it. Itaya Yuka and Sawajiri Erika go from mentor-mentee in the fashion world to best friends and professors' wives in 'Haha ni naru'.

Yui (Sawajiri Erika) and Yoichi live a normal and happy life with their 3-year-old son Kou, until the day that Kou is kidnapped by a disgruntled student of Yoichi's. They search doggedly for their son, but to no avail. The loss and public backlash that they face ruptures their lives and ends their marriage. Nine years later, a case worker at a boys' home realizes one of the residents is in fact Kou, now 12 years old. Kou was abandoned in a squalid apartment and found by the next door neighbor, Asako (Eiko Koike from 'STARMAN'). Starved for love and having been jilted by her lover, Asako raised Kou as her own rather than taking him to the police. One day she dropped Kou off at the boys' home without an explanation, and he'd already been living there for two years when the case worker reunites him with Yui. While Yui and Yoichi's family reunites around Kou, the show mostly focuses on Yui and Kou's relationship and how they both deal with Asako. Kou essentially has two moms, and the question of what makes someone a mother is brought up numerous times.

There's a segment in episode 10 that shows Asako going to therapy and acknowledging the events and psychological issues in her life that led her to do what she did. It's only about two and a half minutes long but I appreciated it, given that  mental illness is one of many taboos in Japan, and mental health services there leave a lot to be desired, from what I've read. 'Haha ni Naru' is like 'Hajimemashite, Aishitemasu' in that it explores alternative forms of parenthood with some depth and is willing to explore the ugly and uncomfortable.

Though I'm not familiar with much of her work, I have to say that I'm a little proud of Eiko Koike. I remember her playing the busty forever-single best friend in 'STARMAN' who was hardly more than comic relief, and here she is getting to flex her dramatic chops as a troubled yet pivotal character.

I finished 'REVERSE' weeks ago and finished 'Haha ni Naru' literally just before I started writing this post. My memory of the former is a little foggier but it left a stronger impression on me, so I pick 'REVERSE' as my favorite of the two.
Posted by Deela (Danielle G.) at 6:49 PM