BOOKS! (Middlesex + The Other Wes Moore)

My original plan for the end of last year/beginning of this year was to wait until I'd read four books before writing another review. That way I could boost my reading numbers and also knock two reviews out in quick succession. But that's already taken longer than I'd like (one more book to go!), and I'm venturing out of the country the day after tomorrow. So rather than potentially not writing another review until March, I'm going to write one now. My last read of 2017 is a novel that I bought during my trip to Mackinac Island a couple years ago. My first read of 2018 is a memoir that was recommended to me by my aunt. 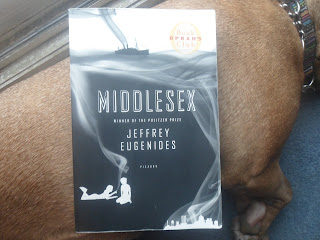 Cal Stephanides, born Calliope, is a Greek-American intersex person who grows up in Detroit during the 1960s and '70s. Due to a history of incest in his family, a genetic mutation is passed down through the generations until it was expressed in Cal. He is born with both male and female reproductive organs, but he isn't thoroughly examined at birth and so is raised as a girl until puberty. As his body exhibits more male characteristics, he decides to present as a man and runs away from home instead of being forced to have "corrective" surgery to help him present as a woman for the rest of his life. His story and family history are narrated by present-day Cal in 2001, who works as a foreign service officer in Berlin. The title Middlesex is a double entendre that references the street that his family live on after their white flight from Detroit to Grosse Pointe, and also references Cal's identity as an intersex person.

Rather than focusing on Cal right away, the first two parts of the novel give precedence to his lineage, including his Greek grandparents' flight from Turkey and the establishment of the Stepanides family  in Detroit. While the first 211 pages might seem like an extended detour, I was enthralled by all of the history I read. I had no idea that Greece and Turkey had such strong contention, or that the Turkish (likely) set the Greek and Armenian sections of Smyrna on fire after WW1. Or that the Ford Motor Company gave itself authority to control every aspect of their workers lives via their "sociological department" in order to find excuses not to pay all workers five dollars a day. And I knew that the Nation of Islam was founded in Detroit, but I hadn't realized how much its ideas had in common with current hotep ideologies. When we finally do get to Cal's childhood and adolescence in parts three and four, still more lessons await.

Back in college I'd heard a couple classmates speak highly of Middlesex (it won a Pulitzer!), but I hesitated toward reading it because I figured the content relating to gender identity and genetics would be way over my head. Granted, the novel is somewhat long and occasionally complex, but it's also one of the most easily readable novels that I read in 2017. The only disappointment I have with Middlesex is that we don't get to witness Cal's young adulthood. Jeffrey Eugenides does such a delightful job of taking his time with each phase of Cal's younger life, but the novel ends with his eventual return back to Grosse Pointe. We get some initial reactions from his mother, brother, and grandmother when "Callie" is now "Cal", but most of the events from 1975 to 2001 are left to our imagination. While I don't think that this novel needs an extra 200 pages, part of me still would've liked to journey through Cal's teens, 20s, and 30s.

If you love the city of Detroit, immigrant stories, gender and sexuality studies, or fiction-written-as-biography, then you'll thoroughly enjoy Middlesex.


"It spread in the space between her panic and grief... it was happiness. Tears were running down her face, she was already berating God for taking her husband from her, but on the other side of these proper emotions was an altogether improper relief. The worst had happened. This was it: the worst thing. For the first time in her life my grandmother had nothing to worry about" (216-217).

"Normality wasn't normal. It couldn't be. If normality were normal, everybody could leave it alone. They could sit back and let normality manifest itself. But people—and especially doctors—had doubts about normality. They weren't sure normality was up to the job. And so they felt inclined to give it a boost" (446).

The Other Wes Moore by Wes Moore 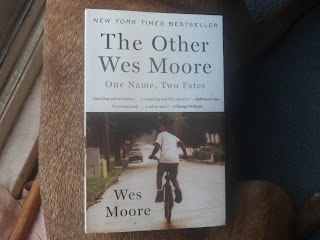 My aunt worked for decades as a social worker and now runs after school and summer education programs at a church in Louisville, so she interacts with young people on the daily. Some of these kids come from the hood and might be classified by outsiders as "troubled" or "at risk", and she's dedicated her life to being a source of stability and guidance to them. So I was hardly surprised when she told me to read The Other Wes Moore. She even tells the kids she works with to read it too! This is another fairly easy read that can be completed in a day or two, though I certainly wouldn't advise rushing through it.

Two black kids named Wes Moore grow up in Baltimore around the same time. Both are raised by single mothers. Both have trouble in school and run-ins with the law. One goes to military school and is a Rhodes scholar, becomes a youth advocate, and writes this book. The other gets convicted for killing a cop and gets a life sentence in jail. When Rhodes Wes hears about the other Wes' story, he writes him a letter which begins their years-long relationship and the process of writing this book. But while one might be seen as the "respectable" or "exceptional" black man that non-black people are eager to celebrate, and the other is seen as the stereotypically no-good and inherently dangerous black man that non-black people are eager to denigrate, Wes Moore steps in to say, "Not so fast". He writes this book not merely to compare their diverging trajectories, but to point to how similar both men are. Rhodes Wes could've easily ended up like the other Wes, and only a handful of pivotal moments and life-changing encounters made the difference.

On the one hand, The Other Wes Moore is a cautionary tale about choices and consequences, with a tinge of bootstraps ideology. But it also treats poor and criminalized people with dignity and understanding, and calls on all of us to create environments where young people can expect more for themselves. If you care about young people and under-served communities, then read this book.


"My father had entered the hospital seeking help. But his face was unshaven, his clothes disheveled, his name unfamiliar, his address not in an affluent area. The hospital looked at him askance, insulted him with ridiculous questions, and basically told him to fend for himself. Now, my mother had to plan his funeral" (14-15).

"I learned that the way many governors projected the numbers of beds they'd need for prison facilities was by examining the reading scores of third graders. Elected officials deduced that a strong percentage of kids reading below their grade level by third grade would be needing a secure place to stay when they got older" (54).