Whew! I said that I'd write a second book review during the month of December, and I made it just in time! Today I've got two books that were recommended to me out of the blue (I rarely ask for recommendations because my TBR list stays ridiculously long, haha!). The first was recommended to me by a really good friend, and the second was recommended to me by a bookstore employee whom I met while purchasing An American Marriage and Human Acts in the Bay Area (four months later and that trip is still coming up, go figure). Let's get to it! 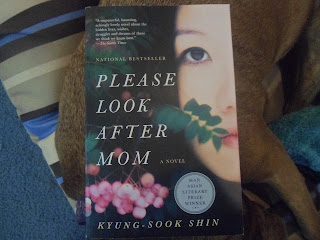 I knew that I'd seen this cover previously but I never paid attention to it because it's so generic. What a shame that this gem and Man Asian Literary Prize winner didn't get a cover that was more interesting and unique. I honestly thought it was just another Amy Tan or Lisa See novel (no shade to them, I just wasn't interested). But then my friend randomly messaged me about this book last month saying, "It's messing me up so bad. Like, in a good way," and I appreciate her taste in books so I swiftly ordered it from ThriftBooks.

The year is 2007. An elderly couple ("Mom" and "Father") arrives at Seoul Station from the countryside to visit their children, all of whom are grown and living in the big city. Contrary to their past visits, none of their five children is there to pick them up, so they decide to make their way to their eldest son's home on their own. When transferring to a different train, the husband steps in assuming his wife is right behind him. The door closes, the train takes off, and he turns around to see that she's not there. He goes back to Seoul Station to retrieve his wife, but she's gone. Thus commences almost a year of efforts and revelations and guilt and family fallouts, as Mom's children desperately search for her.

The novel shifts from the perspectives of the middle child (Chi-hon, the eldest daughter who's also a writer), to the firstborn and eldest son Hyong-chol (Mom's favorite, the one on whom the family's socioeconomic mobility relied on the most), to Father, to Mom, and back to Chi-hon. While some family members are more involved in the search than others—Chi-hon, once the most distant, winds up being the most guilt-driven and devoted to finding Mom, forsaking nearly all else—all of them learn something about Mom in the process that none of them cared to know or paid attention to before. And of course, with Mom being a long-suffering provider and part of the generation that survived colonization and war (she was still a teenager when she and Father married shortly after the Korean War), there was plenty that she hid from her family as well. I found myself most sympathetic toward Chi-hon and most disappointed, angered even, by Father. This was probably by design, given that Kyung-Sook Shin lays it on pretty thick about how self-interested and oblivious Father was. Either he was a rolling stone repeatedly leaving the family for weeks or months at a time, present but still leaving Mom to handle most of the housework, child-rearing AND farming, or he simply prioritized his own ailments over Mom's, never considering that there might be something serious going on with her.

Obviously the driving questions of the novel concern what happened to Mom: why and how she disappears, where she goes and what she does while missing in Seoul, and whether or not her family finds her. I'm not going to ruin any of that for you. I will say that though this is one of the saddest books I've read this year, and that it even prompted me to talk to my mom about whether I've been a decent daughter or not, it is totally worth the read. If you enjoy Korean literature, family drama, or mystery, if you love your mom, and if you've ever been taken for granted or taken someone else for granted, then read this book!


"Most things in the world are not unexpected if one thinks carefully about them. Even something one would call unusual—if one thinks about it, it's really just a thing that was supposed to happen. Encountering unusual events often means you didn't think things through" (30). 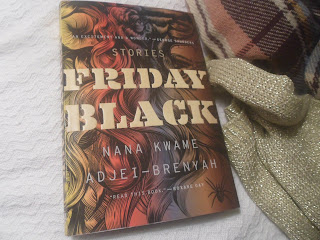 When I was checking out at Books Inc. in Mountain View, the woman ringing me up asked me what my favorite book of the year had been so far. Put on the spot, I was stumped, and the only book I could think of was Marriage of a Thousand Lies. She seemed to be familiar with it, and told me that a new book was coming out that I would also enjoy, implying that it was similar in some way to the one I'd mentioned. "It's called Black Friday, I think. Wait no, Friday Black! That's it, Friday Black is what it's called." Now. I'm not sure if she actually read Marriage of a Thousand Lies or was thinking of a different book when assuring me that its and Friday Black's sensibilities would match. Because those two books aren't similar at all! Other than that they're both written by children of (Black/Brown) immigrants, and that they both emphasize oft-ignored struggles of certain people of color, the two novels are completely different! However, I'm still glad that she recommended Friday Black to me, and that I put it on my Christmas list (thanks, Ma!). It's the last book that I read in 2018, and it's one of the strangest and most special wonders of them all.

I started reading it on Christmas Day, shortly after seeing the trailer for Jordan Peele's upcoming horror masterpiece, 'Us'. Now I'm writing about that same novel, the day after watching the newest episode of 'Black Mirror' ("Baldersnatch"), while also rueing that I can't give my full attention to the annual New Year's 'Twilight Zone' marathon that's airing on Syfy right now. And what superbly fitting works to bookend my experience with Friday Black, because the novel is reminiscent of all those styles. Black horror, satire, science fiction, stories with a moral or twist that refuses to go easy on you. I love those kinds of material. And like the anthology series 'Black Mirror' especially, it's hard to describe this collection of stories without giving away something essential, and I honestly feel like it's best experienced the first time, completely blind. I was intentional about not researching too much about Friday Black before reading it; I didn't even read the back cover or inner flaps so as not to spoil anything for myself.

What I can say is that this novel is very, very Black. All of the main and most of the supporting characters are explicitly or implicitly noted as being Black. And two of its most disturbing stories reference Trayvon Martin and other Black youths who have been killed by white/white-adjacent people or cops without justice. The book opens with "The Finkelstein 5", in which a young Black man's methods of self-determination, survival, and solidarity change when the white man who beheaded five Black children at a library gets acquitted of their murder. Later on, "Zimmer Land" blends the Trayvon Martin case and the woes of working in corporate America by following an employee of an amusement park where white people can massacre Black and Brown actors for sport.

Other personal favorites of mine include "Friday Black" (where consumerism is a virus that turns mall customers into zombies and trampled people's bodies are simply shoved out of the way), "How to Sell a Jacket as Told by IceKing" (where a top seller in a department store witnesses himself being usurped by a newbie), and "In Retail" (where said newbie, now a manager, tries not to be bothered by the fact that an employee commits suicide inside the mall every six months, but the sales never stop). The way Adjei-Brenyah describes store operations, witnessing customer depravity, and having to find satisfaction in the dressed-up nothingness that's offered to you as an employee.... As someone who's worked a couple dead-end jobs (including retail) in the past, I just KNEW that he must've worked retail before, because there's no other way he would've been able to get those details so right! And after reading some of his interviews yesterday, I learned that I was correct!

These stories are both devastating and confusing at times. Adjei-Brenyah takes his time laying out the worlds of each story, spelling everything out in some and intentionally not answering certain questions in others, but nonetheless getting his point across in them all. Like a lot of the best satire, he takes facets of American life and current events, ratchets up certain elements to the extreme, and then lays them back in our laps to show us how absurd our real-life behaviors really are. There's so much grief, rage, violence, isolation, and suffocation that has to do with various Black experiences (as well as capitalism, and classicism, and war). And at the same time Adjei-Brenyah weaves in moments of humor. Hope, even. Like, how in the world does manage that, in his first book no less? Friday Black is a marvel that I'm still trying to figure out. While I'm not sure if it's my favorite read of 2018 or not, it's certainly the most unique. Just read this book! That's all I've got to say.