I'm a little embarrassed to admit that this is the first French-language book I've read since I graduated two years ago.

I was a French major, so I used to read French plays, books, and other texts all the time. Over the past three years I've even acquired some books of my own to read for leisure thanks to one of my old professors, a lost and found in one of my university's academic buildings, the Alliance Française of New Orleans, my host "dad" back in Paris, a couple of bookstores I visited while in Paris. My three months of unemployment last year even brought me more French books! I volunteered at a used book sale at the local Alliance Française and bought a handful of them for cheap. Just last month I bought another used one at my local library. So I've been collecting French books all this time, just haven't been reading them. And I follow French news and media entities everyday online, I read and write French correspondence for work... so it's not like I can't read the books I've been collecting. Just haven't put forth the effort. Until now!

If I recall, I actually started reading this book while helping at that French used book sale last year, but I didn't push myself to finish it until this year. The author is a South Korean woman who's dedicated her academic career to French language and literature, and over a decade ago she put out this novel, using French to write a story set in her home country during the 1960s. It took me longer than it should've to get through it, but I'm glad I finally did because it's quite the story! (All following translations are done by me.) 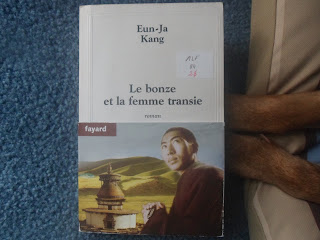 For most of his life, Tae-Mann was a spoiled official's son with an appetite for spending, sex, and doing whatevertheheck he wanted. Not long after marrying his wife, Fal-Ja, his mother died and his father gambled away the family fortune, leaving Tae-Mann and Fal-Ja to live in a shack as peasants. Having never been prepared for real life, Tae-Mann's too proud to work for a living, and he leaves Fal-Ja to go find his fortune.... as a monk! Le temple de la Prosperité (the Temple of Prosperity) is a buddhist temple on a mountain that's frequented by crowds of believers who leave offerings there throughout the year. Tae-Mann believes the temple is loaded with riches, and decides to enter its monastery as a novitiate so he can steal its money after becoming a monk. Upon arriving he meets a fellow hopeful, a widower whose motivation for joining the monastery are pure as can be. They both receive new names once accepted as novitiates; Tae-Mann becomes Bong, and his friend becomes Yong.

Predictably, Bong's plan faces a number of setbacks. He learns that Fal-Ja is pregnant, but conveniently assumes it's another man's child and never goes to see her again. Both Yong and Bong are inducted as monks, but the order is destablilized as rival factions fight over who will succeed the current head monk. Then, one of the monks repeatedly distracts Bong with a hideout were alcohol and prostitutes are abundant. And then, Bong falls in love with one of the parishioners. A woman comes to pray at the temple during winter, but almost freezes to death on her trek down the mountain. Bong is tasked with using his body to warm her back to life, and from then on he's convinced that he and this woman, named Jin, are supposed to be together. Jin is a faithful Buddhist who works in a brothel in order to put her little brother through university. Desperate for love, and to a lesser extent for redemption, Bong's plan to steal the temple's money becomes less about personal riches and more about building a better life with Jin. But again, things don't go quite as planned.

In all honesty I wasn't expecting to enjoy this novel as much as I did. I was so focused on how hard I anticipated reading it would be, that I didn't give myself over to the story until I was about a third of the way through. Who knew that drama among monks could be so interesting? Le bonze et la femme transie is about self-discovery, the struggles of committing to one's beliefs, friendship, love, inevitable human weakness. But it's also about how life can change in ways and at a speed that you can't imagine. Bong is committed to his selfishness for a really long time, and it's surprising to see how much his character still changes.

However, if I had to pick a favorite character, it would be Yong. Yong's trainee period is the shortest of any monk who's ever entered the temple, and his purity of heart and dedication to the monastic life make him a prime candidate to succeed the head monk. He's aware of Bong's scheme from the beginning, and despite being well-esteemed he never scolds his friend or rats him out to their superiors. Yong himself tried and failed to commit to the faith previously, and he believes that sometimes the most wayward people have the greatest potential. So he keeps a respectful distance and tries to guide Bong in the least invasive way that he can. Aware of Bong's faults and yet unfailingly compassionate. What a great friend.

This book was published in 2003, but as far as I know no English translation has been published. If you're a French speaker or learner interested in non-European contributions to Francophone literature, definitely give this book a shot!

I sell my body, but this sin isn't unforgivable. After my death, my body will be burned, and these dishonorable days will fly to the four winds along with its ashes. What matters to me is that I always remain in control of my soul. Who knows? Maybe it will receive a new life, a much happier one (119).

At the end of the day, all the steps I took to escape the temple brought me, on the contrary, closer to it. No matter where I go, I can never go further than my destiny permits. No matter what I do, I've always acted under its eye. In vain I pulled the cord that destiny kept attached to me. The more I tried to flee, the more the cord restrained me (196).
Posted by Deela (Danielle G.) at 3:38 PM